A 25-year-old female sergeant is nearing the end of the first phase of Marine Corps Forces Special Operations Command training,... 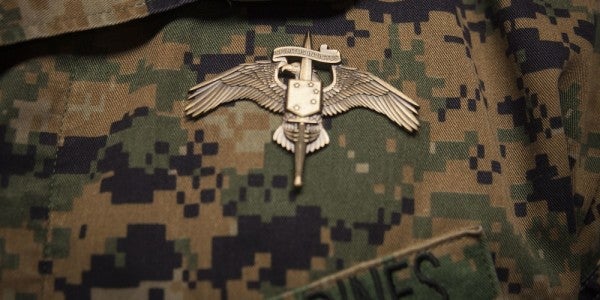 A 25-year-old female sergeant is nearing the end of the first phase of Marine Corps Forces Special Operations Command training, a Corps official confirmed on Tuesday.

If her scores are high enough to continue training, she will be the first woman to attempt the second phase of the assessment and selection process of the Raider pipeline.

The female Marine, who has a food service military occupational specialty, began training on Jan. 16 and her class is expected to complete phase one during the week of Feb. 5, said MARSOC spokesman Maj. Nick Mannweiler. Phase two begins on Feb. 10.

“Every candidate is treated the same with respect to standards and personal and professional progress, so I won't comment at this time on the sergeant's specific performance,” Mannweiler told Task & Purpose on Tuesday.

Military.com first reported on Tuesday that the female sergeant had progressed most of the way through the first phase of the assessment and selection process.

It takes 268 training days to turn Marines into Raiders. The first phase of training lasts 21 days and includes running 12 miles in less than three hours while wearing 45-pound packs — not including water and food — and carrying a rubber rifle without a sling; swimming 300 meters in less than 13 minutes while wearing a camouflage uniform; and land navigation.

MARSOC is not identifying the female Marine, who is the third woman to attempt the assessment and selection process, Mannweiler said. A female staff sergeant was unable to complete phase one, and a female corporal completed all 21 days of training but her scores were not high enough to allow her to continue to the 19-day second phase.

“Candidates who fail to complete Phase I are welcome to make up to three attempts, provided they meet our time in grade and time in service requirements and have not previously dropped out of training on request,” Mannweiler said.

So far, neither of the two women have attempted MARSOC training for a second time, he said.

In order to give Marines the best chances of becoming a Raider, MARSOC has a 10-week training guide posted on its recruiting website.

“Candidates that follow our recruiters' preparation tips and bring their mental A game stand a significantly better chance of passing Phase I than those that plan to get by on youth and overconfidence,” Mannweiler said. “One of our fundamental SOF truths is that quality is better than quantity.

“Candidates coming to A&S; are in stiff competition with high performing, high caliber Marines who all want one of the few spots available on the team.”