Here’s the fourth entry in our Combat Pooping contest, and it’s a strong one. If you have something you think is... 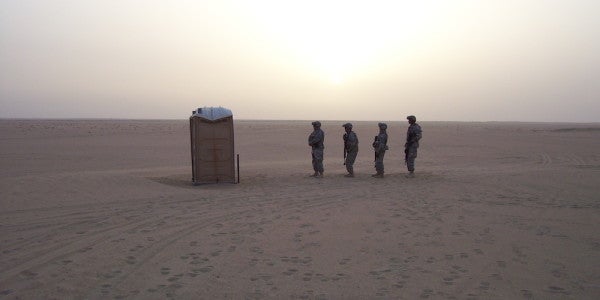 Here’s the fourth entry in our Combat Pooping contest, and it’s a strong one. If you have something you think is as good, please e-mail it to Tom Ricks.

On my outpost in Kandahar, we had six porta-potties for about 60 guys, which is a good ratio. We contracted out this local Afghan dude who had a vacuum truck to come and clean them every week. We called him “Bob Vila” because he had a very short, thick beard that made him look like, well, Bob Vila.

From the time I got there in late June until September he, came by and sucked out the poop. Then, one week, he just stopped coming around. Days went by, and you could start to notice the smell all over the outpost. Every time you went into a porta-potty, you could see the level of poop rising like a newly-formed land mass after a volcano eruption. A few inches a day, every day.

We asked where “Bob Vila” was, but nobody knew. We had no idea if he quit, was killed, captured. I mean, anything could happen to local people who were seen helping Americans, so we thought the worst.

Eventually, two weeks go by and all six stalls are filled right up to the rim. Guys were squatting on top of the seats because if you sat down normally you'd end up pooping in yourself. It was literally over max capacity in every stall. Flies were everywhere. Guys only took shits when they were about ready to burst. Some guys just quit using them all together and started using empty ammo cans. Luckily we were a mortar platoon and mortar cans are rather large and perfect squatting height; at one point in the deployment, we had rows of ammo cans by the mortar pit and another row of ammo cans waaaay back off to the side of the outpost where everyone started doing their business.

Then one day salvation arrived. Or rather, returned. “Bob Vila” and his truck rolled back in. You would have thought we caught bin Laden, everyone was so excited. He had to make two trips to clean out all six stalls, but he eventually got them good as new again and we went back to shitting like normal humans. Before he left we asked him where he'd been. “Vacation,” he said.

Where an Afghan poop cleaner goes on vacation I don't know, but it better have been worth it.

Jay Kirell is an Afghanistan combat veteran who deployed with the 101st Airborne to Kandahar as an 11C. He makes his home in Indiana and is writing a novel about his deployment.Follow him on Twitter @jasonkirell