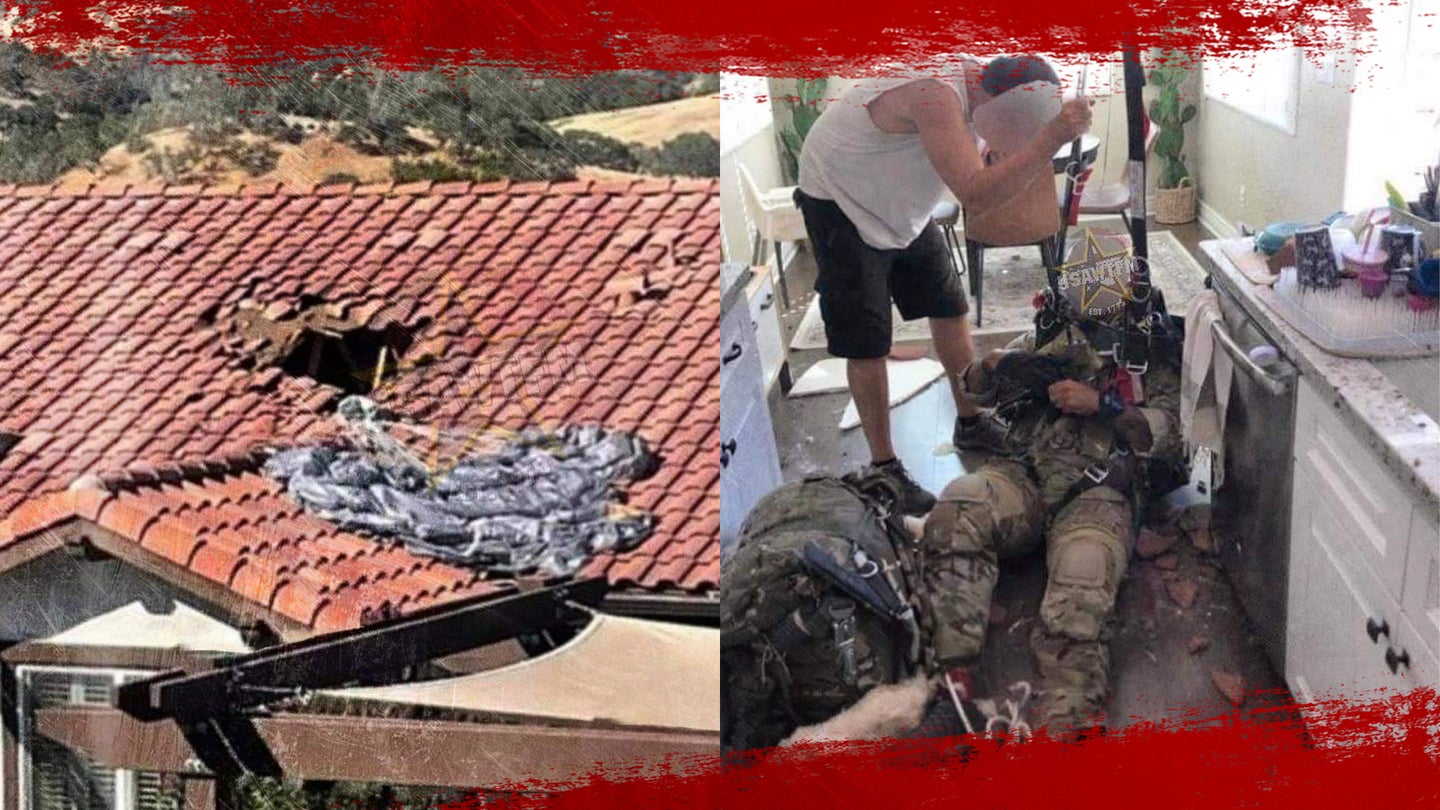 I will always be in awe of people who voluntarily climb into aircraft, soar into the heavens, then leap into the open air and trust that what is essentially a bed sheet and some rope is going to see them safely to the earth. Among the many reasons I would never do this myself is the possibility that something like this might happen:

A quick note before we go any further: the service member in this photo did not appear to suffer any serious or life-threatening injuries.

The photos, which were first shared by the popular military social media group U.S. Army WTF! Moments on July 10, appear to show the results of a recent airborne jump on the West Coast which ended with a British paratrooper falling through the roof of someone’s home in Atascadero, a suburb in San Luis Obispo, California, according to multiple news reports.

The paratrooper was purportedly taking part in a High Altitude Low Opening (HALO) jump, reports the Daily Mail. Designed as an infiltration technique, a HALO jump typically involves a parachutist in full gear jumping out of an airplane at high altitudes and then opening their parachute once they’re closer to the ground. Here’s how they’re described in a 2005 Army manual on military free-fall techniques: “High-altitude low-opening (HALO) operations are jumps made with an exit altitude of up to 35,000 feet mean sea level (MSL) and a parachute deployment altitude at or below 6,000 feet above ground level (AGL). HALO infiltrations are the preferred MFF method of infiltration when the enemy air defense posture is not a viable threat to the infiltration platform. HALO infiltrations require the infiltration platform to fly within several kilometers of the drop zone.”

The incident occurred in the late afternoon of July 7 when residents of the neighborhood saw the parachutist falling toward their homes under a partially-open canopy. The paratrooper reportedly hit the tile roof of the home and fell right through. The home’s residents were out at the time, but he was quickly found by a neighbor who immediately called emergency services, according to The Daily Mail.

“It’s a miracle in my estimation, really. I mean, who lands like that without a parachute and lives?” said one of the neighborhood’s residents, Rose Martin, in an interview with KSBY, a local news station.

“I was in shock. I’m like, what?,” Martin said. “So I ran in to make sure he was okay and I checked on him and his eyes were open but I wasn’t sure if there were any injuries. I didn’t want anyone to move him.”

The paratrooper was found conscious, though stunned, and while he complained of some pain, he had no visible injuries, according to a statement from the Atascadero Police Department. The city’s fire and emergency services personnel treated the parachutist and transported him to a nearby hospital.

A subsequent investigation found that the service member had been taking part in a training exercise at Camp Roberts in San Miguel, California when his chute failed to fully deploy, and there were no other incidents or injuries during the jump, according to the Atascadero Police Department.

“We are grateful that the parachutist received only moderate injuries and that no other persons suffered injury,” reads the police department’s statement.