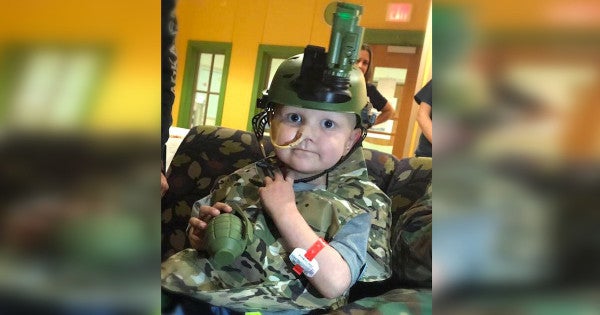 Dozens of U.S. service members showed up to the funeral of a 5-year-old boy who dreamed of being an “Army Man” before he passed away from cancer last week.

River “Oakley” Nimmo was diagnosed with neuroblastoma cancer when he was two years old, according to a 2017 GoFundMe campaign set up by a family friend, He was declared cancer-free in June of 2017, but the cancer came back the next month.

Nimmo was “feisty, courageous, smart and full of life,” his obituary says, and spent “most of this life fighting to live … with a smile on his face.

“In between hospital stays, Oakley spent his free time driving his power wheels and shooting his toy guns,” the obituary reads. “He often talked of being an 'Army Man,' as he called it, when he grew up.”

Nimmo's family made the request that “any active military members and/or veterans” attend his funeral — and dozens from the Arkansas National Guard did just that, per CNN.

The Arkansas National Guard also made Nimmo an Honorary Colonel on June 20th, with the duty title “ARMY MAN.”

Spokesperson for the Arkansas National Guard, Maj. William Phillips, told CNN that many of the service members had been following Nimmo's battle against cancer, and that he'd won their hearts with his love of the military.

“On behalf of the veterans here in Arkansas and the veterans of this country and in this community, we're honored to be here for him,” David Cagle of the Arkansas National Guard said per Arkansas affiliate, KFSM. “He's always going to be our Army man, our little soldier, angel.”

Other service members offered an outpouring of love on social media.

“I wish I heard about his struggle beforehand,” said one man on Facebook, who identified himself as a member of the 101st Airborne Division. “I would have driven from Ft Campbell to honor the bravest Soldier I could ever hope to meet. Til Valhall Soldier. I salute you.”

“Rest easy brother,” said another Facebook user. “Until Valhalla little Warrior…it would have been an honor to serve besides you.”