"If Congress believes that we should go to war with Iran then Congress had better have the courage to stand up here and demand a vote on whether or not to authorize it. The idea that we would send young American men and women – who swore that oath to the Constitution – into a war that is itself unconstitutional is unacceptable." 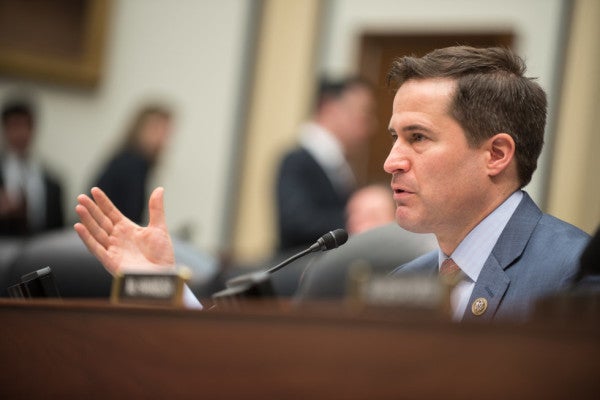 A small group of lawmakers is arguing that President Donald Trump does not have the power to launch a new war against Iran without first getting permission from Congress.

Chief among them is Rep. Seth Moulton (D-Mass.), who was one of six lawmakers who voiced their support on Wednesday for a proposed amendment to the fiscal 2020 National Defense Authorization Act that would prevent any federal money from funding a war with Iran unless Congress declared war or Trump secured a new authorization for the use of military force.

Only after Congress has had a “thorough debate of the facts, the findings, and the intelligence presented to us” should lawmakers decide whether the United States should go to war with Iran, said Moulton, a Marine veteran who deployed to Iraq four times.

“Look, I fought Iranians when I was in Iraq,” Moulton said at a news conference. “We will fight them again if we have to. But war right now is not necessary. None of us underestimate the threat that Iran poses. None of us would hesitate to use force if it led to a lasting peace. We know war with would be bloody and young Americans in the community we represent would pay the highest price. All of us came to Congress for a debate like this one.”

It is not clear whether the amendment will be part of the House of Representatives' final version of the NDAA. Lawmakers are expected to begin voting on the amendments on Thursday. A similar amendment failed in the Senate last month.

Veterans groups have long called for Congress to re-examine the authorizations for military force passed nearly 20 years ago before the Afghanistan and Iraq wars, which have been used to justify other military actions in Syria, Libya, and elsewhere.

The leaders of Concerned Veterans for America and VoteVets wrote a 2018 opinion piece arguing it is time for Congress to reclaim its war-making powers by repealing the 2001 AUMF against Al-Qaeda, which begat the “Forever Wars.”

Now both groups are mobilizing their members to demand that lawmakers support the proposed amendment requiring Trump to get a new authorization for any military action against Iran, said Will Goodwin, director of government relations for VoteVets.

“If Congress believes that we should go to war with Iran then Congress had better have the courage to stand up here and demand a vote on whether or not to authorize it,” Goodwin said at Wednesday's news conference. “The idea that we would send young American men and women – who swore that oath to the Constitution – into a war that is itself unconstitutional is unacceptable.”

Moulton acknowledged that Congress had spent the past 18 years “neglecting its duty” to authorize wars, but a new generation of veterans now serving as lawmakers are trying to finally rein in the president's war-making powers.

“This amendment says that the president cannot unilaterally act on the bad advice of [National Security Advisor] John Bolton,” said Moulton, who is one of the 25 Democrats running for president.

“He can't lead us into a war with Iran that has no endgame or strategy without Congress' authorization. It says that the decision to go to war shall be decided by the body that is the closest representative of the American people.”

SEE ALSO: Pentagon: We won't reveal proof Iran is behind recent Middle East attacks, but have we ever been wrong before?