After 18 years of conflict, Congress needs to rein in the forever wars

Two opposing veterans groups are joining forces to urge Congress to reassert its role in authorizing the use of military force. 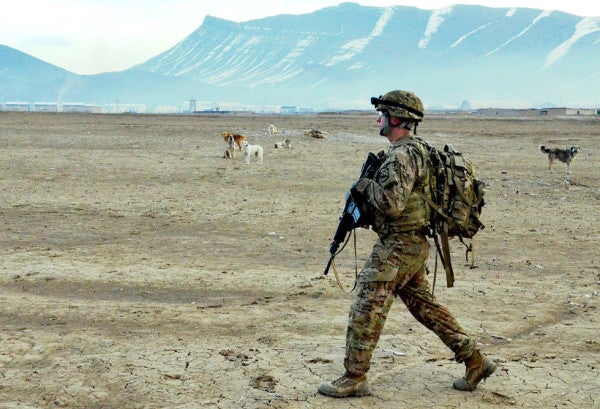 Over the past several years, the organizations we lead – Concerned Veterans for America and VoteVets – have vigorously disagreed on major public policy issues, including the future of the Department of Veterans Affairs (VA). We have also worked on the opposite side ofmany political fights across multiple election cycles.

But we both served our countries in uniform – including in Iraq – and we both believe that one important way to alleviate the strain at the VA is to pursue a more restrained foreign policy, which will create fewer injured veterans.

To achieve this vision, we are joining forces to urge Congress to reassert its role in authorizing the use of military force, ensuring our country fights only the wars that are necessary to keep us safe — and to stop giving the executive branch free rein to entangle America in new conflicts.

In the aftermath of the Sept. 11, 2001 attacks, Congress passed and President George W. Bush signed into law an Authorization for Use of Military Force (AUMF) to eliminate the threat posed by Al Qaeda and to punish the Taliban in Afghanistan – an action which was clearly justified at the time.

However, that law, barely more than a printed page long, has for nearly two decades been put to many uses for which it was never intended.

The result is a “war on terror” that has stretched far beyond Afghanistan. According to Brown University’s Costs of War Project, the United States has had combat troops on the ground in 14 countries in just the past two years. Some, like Syria, most people know about. Others, like the Central African Republic, have barely registered with the American public.

These conflicts are increasingly removed from immediate national security concerns. But they nevertheless impose serious costs in terms of American lives and treasure. Thousands of troops have died, trillions of dollars have been spent already, and the costs will continue to grow as we care for the veterans of these conflicts. Half of U.S. veterans of the Afghanistan and Iraq War have applied for long-term disability through the VA, which is likely to add hundreds of billions of dollars to the federal budget over the coming decades.

Since 2001, the Bush, Obama and Trump administrations have engaged the United States in a series of military missions without congressional approval and have used an overly broad interpretation of the 2001 AUMF to justify them. For example, both the Obama and Trump administrations have used the legislation to justify military action in Africa against groups that did not exist in 2001.

There can be no real expectation that any presidential administration will have the incentive to pause to reflect on the damage done to U.S. national security or our constitutional system by this kind of abuse.

The solution lies with Congress, which for too long has persisted in what author Stephen R. Weissman has called “a culture of deference” on foreign policy.

It is past time for Congress to end the deference.

The recent resolutions that passed Congress mandating an end to American military support for the war in Yemen offer a hopeful sign and a roadmap for how Congress can become more assertive in shaping American foreign policy.

Lawmakers should also repeal the outdated 2001 AUMF, which has allowed multiple presidents to operate under the assumption that Congress has ceded all war-making authority to them. Different bipartisan bills, like those recently introduced by Rep. Barbara Lee (D-Calif.) and Sen. Rand Paul (R-Ky.), offer potential vehicles for repealing the 2001 law.

More fundamentally, lawmakers need to reclaim the legislative branch’s power of the purse, its most effective tool – and one it has wielded effectively in the past to restrain military action.

Americans are tired of forever wars. While they’re divided on much, after 18 years they overwhelmingly support withdrawing U.S. troops from Afghanistan and other conflicts.

Like many Americans, we certainly expect to continue to butt heads on other issues. But we just as certainly expect to work together to achieve the common goal of persuading Congress to reassert its role as a co-equal branch of government when it comes to authorizing the use of military force.

Dan Caldwell is executive director of Concerned Veterans for America. Jon Soltz is the chairman of VoteVets.