12 Reasons Why Paratroopers Do It Better

Face it, there’s no way to enter the battlefield with more derring-do than as part of a mass-tactical parachute drop... 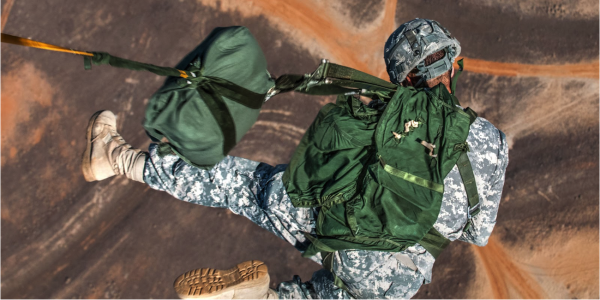 Face it, there’s no way to enter the battlefield with more derring-do than as part of a mass-tactical parachute drop on a moonless night, striking terror in the hearts of the enemy. As a German officer wrote in World War II, “American parachutists…devils in baggy pants…are less than a hundred meters from my outpost line. I can't sleep at night; they pop up from nowhere and we never know when or how they will strike next. Seems like the black-hearted devils are everywhere…”

Among the world’s armies, paratroopers are known for their violence of action, brash esprit de corps, and willingness to begin a fight surrounded by the enemy. Seventy-four years after the formation of the first American airborne unit, we’re still better than non-airborne personnel, or NAPs, as we call them. Here are 12 reasons why.

1. Everyone we share a foxhole with has a high degree of motivation.

Paratroopers volunteer three times: to serve in the Army, to attend jump school, and to go on jump status. Soldiers don’t just “end up” in the airborne. When we go to war, we go with the best.

2. Hollywood makes movies about us.

3. We have the most exotic duty stations.

Hawaii, Italy, Alaska, Korea, and of course, Mother Bragg in Fayetteville, North Carolina, home of the 82nd Airborne Division. The truth is, paratroopers spend the first half of their careers trying to leave Fort Bragg, and the second half trying to get back. At Bragg, privates still stand at parade rest for specialists.

Let’s stipulate up front that the Marines have the best dress uniforms, and getting out of a boat on a beach is probably harder than it looks. Marines and paratroopers come from a tradition of specialists: Marines seize beachheads, while paratroopers seize airfields and save beachheads from collapse (think Sicily, Anzio, and Normandy). In either case, Big Army finishes the job. Fact: regular soldiers conducted more amphibious landings in the Pacific Theater in World War II than Marines, while no regular soldiers made airborne assaults.

5. We get the most VA benefits.

Show me a retired paratrooper with perfectly working ankles, knees, and back, and I’ll show you a case of stolen valor. Paratroopers run, run, run with heavy packs, and they land like this: feet, ass, head. Though injury rates vary widely depending on the type jump — day or night, combat equipment or no-equipment, “Hollywood,” wind velocity, temperature and humidity, type of parachute and aircraft, quality of the landing zone, etc. — in general, the average for most armies since the late 1950s has been about 4%. While a 2011 study of 82nd Airborne paratroopers found an injury rate of just over 1%, at that time, the division was conducting fewer of the more dangerous nighttime combat-equipment jumps.

“We used to discuss it at brigade when I was scheduling jumps,” a retired airborne operations NCO recently told me. “Daytime Hollywood was the least injury prone, so we went for those. Didn't want to lose guys before deployments.”

Of course, the old timers go on about all of their jumps with 200-pound rucks in 20-knot winds and dragging wildebeests off the drop zone, but their jump logs give us real numbers. Between 1994 and 1998, retired operations Sgt. Maj. John Hawley logged 31 jumps in the 82nd, of which 22 were at night with combat equipment. Another retired sergeant major logged 43 of 57 between 1995 and 2001. That’s two out of every three jumps night/combat equipment, whereas in the 2011 study, two daylight Hollywood jumps were reported for each nighttime/combat equipment jump.

6. We don’t have to do extra PT to get high APFT scores.

Paratroopers are built like barnyard chickens. All the meat is in the upper body. The legs are skinny from all the running we do. That means we score high on push-ups, sit-ups, and the two-mile run.

In 2011, my new NCOIC was welcomed to the 82nd Airborne Division along with other division newcomers thusly: “There’s a lot of things you’re going to see here that are a little messed up or a little different. Don’t try to change it. We’re the 82nd Airborne and that’s the way we do it. We like it that way.”

That’s true in part because of the requirements associated with the 18-hour mobilization time maintained by the airborne, but also because of our heritage. Said 82nd 1st Sgt. Steven Noonan, “The airborne units have a very short history (World War II to the present), but our obsession with upholding the honor and reputation of the Regiment and always trying to add to its glory is unmatched anywhere else in the army. I was in the 505th [Parachute Infantry Regiment] for Desert Storm, and our obsession with General Gavin was almost cult-like back then. His leadership principles still set the standard, ‘A leader in this outfit is the first one out the door of the airplane and the last one in the chow line.’”

Airborne operations are dangerous business. When the Germans invaded Crete in 1941, German paratrooper losses were so heavy that Hitler forbade their use for the remainder of the war except in special operations. Had Allied forces known that, the eventual invasion of northern France might have happened without the 13,100 silks in skies above Normandy.

Ever heard of the Airborne Timeline? On jump days, we go to a place called Green Ramp, don parachutes, weapons cases, and rucksacks, and then sleep in our combat luggage for hours while we wait for the Air Force to get back from Chili’s. Truth is, every soldier in the Army knows how to wait for long periods, catnap at a moment’s notice, and endure long periods in awkward equipment. We just do it longer, strapped with more equipment.

In the hold of a C-130, there are only two types of people: jumper and jumpmaster. In the words of an airborne battalion commander, “When you are in line at manifest, no one cares what rank you are: You are a paratrooper. The jumpmaster in charge might be a sergeant, a major, or a colonel. It doesn’t matter. He’s a jumpmaster and that’s who you are listening to. You look to your right and left to see who the junior guy is, and that’s who you are going to take care of. To me, that’s beautiful.” It is.

10. We get great gear that we never get to use.

No snivel gear allowed. Paratroopers are issued, must deploy with, but are verboten to ever wear that warm “Michelin Man” winter parka and pants or even the green fleece. We can freeze our asses off like nobody’s business. Except chief warrant officers. They do whatever they want, even in the airborne community.

Tanks, Bradleys, Strykers, oh why? Not here. Armor officers who get transferred to the airborne often complain about our lack of long-term planning. We don’t have to plan for moving tons of heavy, unwieldy armor, so why plan at all? Our job is to be in the enemy’s backyard within 18 hours of notification, and all we need to bring is our weapons, ammunition, and lunch. Airborne brigades maintain a famously high and adaptive optempo. We’re all about the short term.

12. We have the best pejoratives.

There are no safe spaces or “stress cards” on Fort Bragg, and the only trigger warnings you’ll ever get come from the tower. We call things what they are. If your chute doesn’t open, you burn in. Push-ups are push-ups, not some resting, leaning, front thing. If you walk on Ardennes Street, you’re a dead man. If you don’t have wings, you’re a leg. A dirty, stinking, nasty leg.