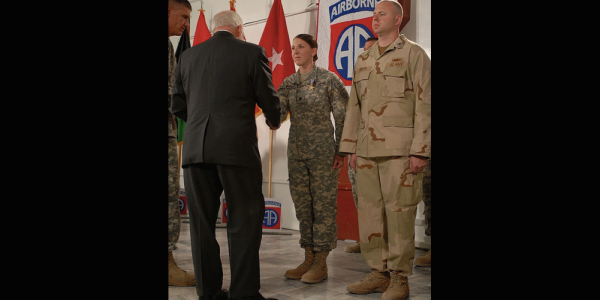 In the waning hours of Apr. 25, 2007, Army Pfc. Monica Lin Brown, 18, rushed out of her Humvee after a vehicle in her convoy was hit with an improvised explosive device. With small arms fire raining down, Brown bravely put herself in harm's way to save the lives of two critically injured fellow soldiers.

Spc. Monica Brown stands in the hallway of the Forward Operating Base Salerno's hospital in Afghanistan, Mar. 10, 2008.

In Afghanistan’s southeastern Paktika province, the 82nd Airborne Division’s 782nd Brigade Support Battalion, 4th Brigade Combat Team, was for a leader engagement with the village elders when the trail Humvee in the convoy hit a pressure-plate IED and then ambushed, according to Brown’s Silver Star citation.

Spring is known as the beginning of the fighting season when the Taliban re-enter Afghanistan through thawing mountain passes from their safe-havens in Pakistan, and when the fighting began to ramp up for that season, Brown, a medic, was assigned to Delta and Charlie units spending multiple days at a time on combat operations. Reflecting on her assignment at the time, Brown described it as “a constant mission.”

That day, they had just turned into a dry streambed when someone began yelling, indicating the vehicle had been destroyed, Brown said in an Department of Defense press release. As the soldiers saw the vehicle’s tires flying through the field adjacent to the convoy, they quickly realized it wasn’t an isolated accident.

“I only saw the smoke from the vehicle when suddenly we started taking small-arms fire from all around us,” she said. The combat team’s gunner began returning fire and their platoon sergeant, Staff Sgt. Jose Santos, yelled to Brown, “Doc! Let’s Go.”

“Everyone was already out of the burning vehicle,” remembered Brown. “But even before I got there, I could tell that two of them were injured very seriously.”

Arriving, she saw that all five of the soldiers from the Humvee were stumbling, burned and cut. Spc. Stanson Smith and Spc. Larry Spray, however, were critically injured. Spray was suffering from severe burns and Smith suffered a severe laceration on his forehead blinding him, according to a 2008 Washington Post report.

Two other soldiers from the vehicle assisted Brown in moving Smith and Spray away from the burning Humvee. They made it into a ditch right as the insurgents started to fire mortar rounds. Protecting the injured with her body, Brown counted more than a dozen mortar strikes. Just then, the ammunition from the downed Humvee began to self-detonate from the heat of the fire — 60mm mortar rounds, 40mm grenade rounds, and more.

“I was surprised I didn't get killed and she'd been over there for 10, 15 minutes longer,” Brown’s platoon leader, Martin Robbins, told the Washington Post. He had just moved his vehicle close to Brown and the injured. “There was small arms coming in from two different machine-gun positions, mortars falling … a burning Humvee with 16 mortar rounds in it, chunks of aluminum the size of softballs flying all around,” Robbins continued. “It was about as hairy as it gets.”

Santos retrieved the pickup truck and positioned it to load the two wounded men, while Brown kept telling Smith to keep Spray conscious. “Talk to him,” she instructed Spray, as she put her expertise as a medic to use readying both injured men for helicopter extraction that wouldn’t arrive for another 45 minutes.

Brown “never looked around or anything,” Robbins said of her calm demeanor in the heat of the action. “She was focused on the patients the whole time. She did her job perfectly.”

Monica Brown’s combat experience in 2007 is part of a larger dialogue on the place of women in combat roles. She was only in the field for two more days before being removed from her posting. “I got pulled,” she told the Washington Post, because her presence as “a female in a combat arms unit” had attracted attention. “I didn’t want to leave.”

Brown said she never expected to be in a situation like that and credits her training and instructors for her actions that day. “I realized that everything I had done during the attack was just rote memory,” Brown told the DoD press service.

“Kudos to my chain of command for that. I know the training, like I was given, any medic would have done the same in my position.”