Army May Unveil A New And Improved Lightweight .50-Cal By Summer

Like most of us, the U.S. Army is trying to shed weight before the summer hits, with plans to unveil... 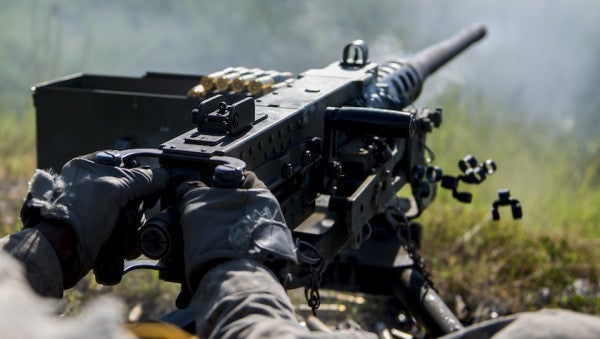 Like most of us, the U.S. Army is trying to shed weight before the summer hits, with plans to unveil a new lightweight .50-caliber machine gun within the next few months. Although it will likely take another year to move beyond the prototype stage and into production, the weapon’s engineers are already lauding its versatility and lean muscle.

These developments spell big changes for the M2 .50-cal model, which has thelongest active service record of any weapon in the U.S. Army arsenal. The M2 and its successor, the M2A1 — a more reliable and durable model than the original — have been used on American tanks, ships, helicopters, and Humvees since the .50-cal debuted in 1933. That’s 83 years, six wars, and a whole lot of lead put downrange.

But it’s time for a tune-up, and a pretty significant one at that. The new .50-cal will only weigh 60 pounds — 26 lighter than the current 86-pound models — but will pack the same punch. It’ll be far easier to handle and give gunners an unprecedented combination of strength, speed, and agility. It’s like upgrading from the family sedan to a Corvette, except this isn’t a car. It’s a death machine.

The key upgrade involves the gun’s body, which is made of significantly lighter titanium than current models. This new material will provide troops with the nimble power that is key when transporting, mounting, and firing weapons against enemy forces. Gunners on helicopters, Humvees, and tanks will especially benefit from this newfound agility since it will be far easier to shift fire from a moving vehicle.

There is, however, a catch. This lightweight .50-cal still needs to be built and thoroughly tested, leaving plenty of room for alteration and speculation. Despite the uncertainty, Army officials like Lt. Col. Paul Alessio, product manager for Crew Served Weapons, are confident this is the first of many major upgrades to come.

In an interview withScout Warrior, Alessio said the Army also has plans to develop advanced lightweight, caseless ammunition, a lighter barrel, new fire control technology, and new optics — including a laser rangefinder, which uses the speed of light to identify exact target distances — for the improved .50-cal. Alessio estimates these features will be battle-ready within the next 5-10 years.

Worth the wait? Absolutely.