The Navy is eyeing suppressors for its upgraded ‘Ma Deuce’ .50 cal machine guns 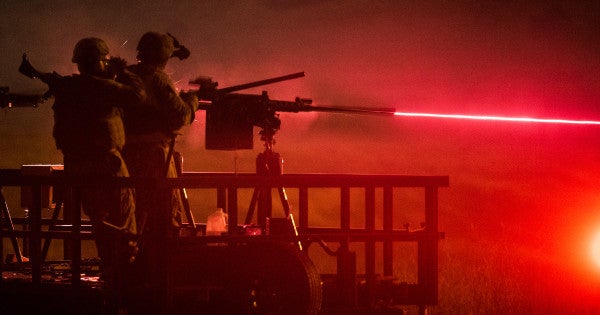 In a request for information (RFI) issued on Tuesday, Naval Supply Systems Command announced a search for defense industry sources equipped to manufacture suppressors for the M2A1 variant of the tried-and-true M2 .50 caliber machine guns.

According to the RFI, the ideal suppressor will reduce the 160-decibel roar of a .50 cal to somewhere below the Pentagon's 140-decibel standard for hearing damage.

In addition, the suppressor should reduce muzzle flash by up to 95% compared to a standard barrel — all without compromising the weapon's accuracy, reliability, and rate of fire.

The original M2 .50 caliber, developed by legendary American gunsmith John Browning and fielded to the U.S, armed forces in the 1930s, has long been a favorite among U.S. service members for its effectiveness and reliability.

The updated M2A1 variant includes “a quick-change barrel, fixed headspace and timing, and a flash hider that reduces the weapon's signature by 95 percent at night,” according to the Pentagon.

While the Army and Marine Corps have broadly adopted the M2A1 in the last several years, the Navy appears to have only fielded the system to small vessels assigned to its Coastal Riverine Squadrons so far.

The Navy isn't the first service to slap suppressors on Ma Deuce. In May 2017, the Marine Corps announced that infantry Marines with the Bravo Company, 1st Battalion, 2nd Marines, became the first to deploy with suppressors on every weapon, including their M2 .50 cals.

So what does that a suppressed Ma Deuce sound like? Like a lethal whisper on the wind: