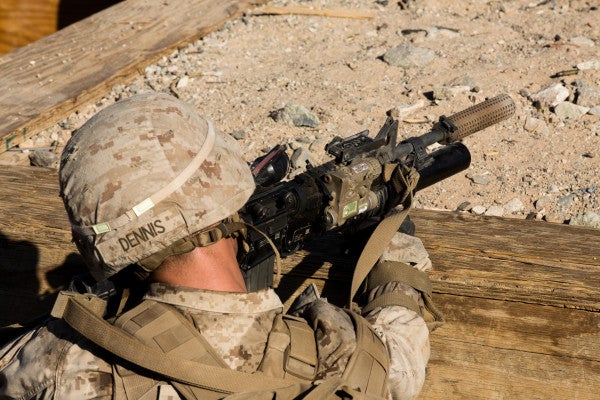 Marine grunts in close combat formations will start receiving suppressors for their small arms at the end of this year, Task & Purpose has learned.

In an email to Task & Purpose, MARCORSYSCOM confirmed that the Corps plans on fielding those suppressors to close combat units starting in the first quarter of fiscal year 2021.

“Our intent is to posture our Marines with capability now in order to improve the lethality of our Marine Corps Close Combat Forces,” MARCORSYSCOM spokesman Many Pacheco said.

While the Corps has fielded suppressors to reconnaissance units and employed them on the M27-based M38 Squad Designated Marksmanship Rifle in the past, the proliferation of suppressors among close combat units has been years in the making.

Starting in 2016, the Corps initiated a series of experiments that saw several units from the 2nd Marine Division apply suppressors to every element of an infantry battalion from the M4 to the M2 .50 caliber machine gun.

By mid-2017, the 2nd MarDiv's Bravo Company, 1st Battalion became the first unit to deploy with suppressors on every individual service weapon during a rotational deployment to Norway.

Months later, MARCORSYSCOM issued a sources sought notice to the defense industry for between 18,000 and 194,000 commercially-available suppressors for the M27, M4, and M4A1.

MARCORSYSCOM did not specify exactly how many suppressors the Corps plans on acquiring as part of its latest sole-source contract, but officials have said in the past that fielding will eventually reach every corner of the infantry community.

“The intent is to suppress every M4, M4A1 and M27 in the infantry community,” MARCORSYSCOM program manager for infantry weapons Lt. Col. Tim Hough said in 2019. “Our intent there is to move quickly and find the best possible suppressor we can that is good enough in order to move out in a quick enough fashion.”

Related: No, the Marine Corps is not replacing the M27 with the Army’s next-generation squad weapon after all