The Marine Corps’s ATV is getting some racing-inspired upgrades

After two years of getting knocked around by grunts in the field, the Marine Corps is applying a raft of upgrades to its lightweight all-terrain vehicles to improve safety and performance, including reinforced floorboards and run-flat tires 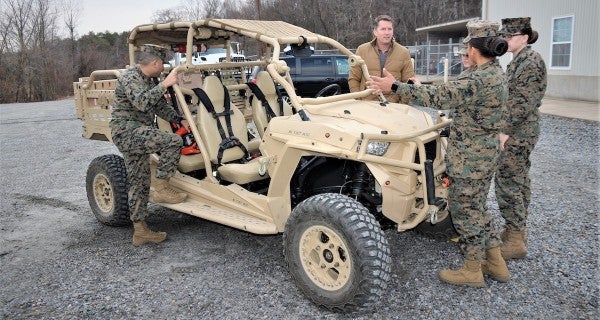 After two years of getting knocked around by grunts in the field, the Marine Corps is applying a raft of upgrades to its lightweight all-terrain vehicles to improve safety and performance, including reinforced floorboards and run-flat tires.

“Even though we're in the operations, maintenance and sustainment phases with the vehicle, it's such a new vehicle and we're seeing Marines constantly push the limits of the truck,” Jason Engstrom, lead systems engineer for the UTV at PEO Land Systems, said a MARCORSYSCOM release. “Every day we're seeing Marines come up with new ideas on how to use the truck.”

Translation: Marines are beating the shit out of the UTV.

Indeed, the upgrades — which include high clearance control arms, a road march kit, a clutch improvement kit, and an environmental protection cover — are mostly designed to help protect Marines as they put the vehicle through its paces. Indeed, the vehicles' new floorboard protection was explicitly designed to deal with rough rides over inhospitable terrain.

“When Marines deployed the vehicles to Australia, they found that high-density sticks and branches on the ground have the potential to pop up and puncture the plastic floorboard, which is a safety hazard,” Engstrom said in the release.

While most of the changes came from “critical feedback” from infantry Marines, one upgrade came from an unlikely source, according to Engstrom: the Baja off-road racing industry that spans hundreds of miles of desert in Mexico.

Engstrom said the Baja racing scene inspired the incorporation of TireBalls, a run-flat technology that allows for uninterrupted movement even in the event of a major tired puncture.

“Inside each tire are 16 inflatable cells, so if any one cell pops from running over a spike or nail, you'd still have 15 other cells full of air to continue driving on,” according to Engstrom.

There's no word yet if any of these safety upgrades will help should the vehicle burst into flames.