13 Years Later, A Marine’s Silver Star Is Getting Upgraded To A Navy Cross. Here’s Why

An infantry Marine’s combat heroism in Iraq is getting an upgrade this afternoon. Former Staff Sgt. Eric Smith is set... 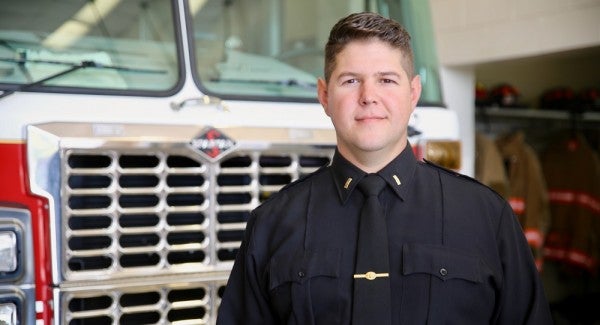 An infantry Marine’s combat heroism in Iraq is getting an upgrade this afternoon.

Former Staff Sgt. Eric Smith is set to receive the Navy Cross during a ceremony Sept. 14 at 2 p.m. CDT at the Veterans Memorial Park in Irving, Texas, the Marine Corps announced.

Smith’s decoration represents an upgrade from his Silver Star, which he previously received for courage under fire while deployed to Ramadi, Iraq, as a squad leader with the 2nd Battalion, 4th Marines in 2004. Smith will become the 40th Marine to receive the Navy Cross — the military’s second highest commendation for valor, surpassed only by the Medal of Honor — since the wars in Iraq and Afghanistan began.

Smith, who will attend the ceremony along with wife, 11-year-old son and family, serves as a lieutenant and paramedic with the Irving Fire Department in Texas. But he was humbled by the honor. “I firmly believe that I was an ordinary Marine placed in an extraordinary situation,” he said in a Marine Corps statement prior to the ceremony.

Related: ‘They Called Me Doc’: The Newest Medal Of Honor Recipient Tells His Story Of Heroism In Vietnam »

On April 6, 2004, Smith and his platoon were sent to reinforce a group of Marines who were under attack from insurgents in Ramadi. Smith’s platoon was also ambushed, leaving their commander critically wounded.

According to his Silver Star award citation, Smith took command of the platoon and led its members 50 meters across open ground to cover as machine-gun fire and rocket-propelled grenades rained down. Then he turned around and sprinted back the way he came — across open-ground, with no cover in sight — to get his platoon commander to cover and call for a casevac.

The wounded Marine evacuated, Smith turned to the mission at hand — getting to the ambushed squad. Coordinating machine-gun fire from a 7-ton troop transport truck, Smith rallied his Marines and led them in a counterattack against their ambushers. As the Marines fought to break the attack, Smith coordinated fire support from newly arrived Army Bradley Fighting Vehicles before planning a withdrawal back to the unit’s command post.

Smith enlisted in the Marines in May 2001 out of his hometown of Waxahachie, Texas, and now, 13 years after that battle, he attests that his actions weren’t extraordinary — for a Marine.

“I am honored and humbled to receive the upgraded award of the Navy Cross,” Smith said. “I understand that this places me in a category of Marines that I would have never imagined to be a part of.