UNSUNG HEROES: The Marine Who Lost A Leg In Iraq And Became A Georgia State Trooper

Stephen M. Smith’s application to the Georgia State Patrol last year came with the stipulation that no one would go... 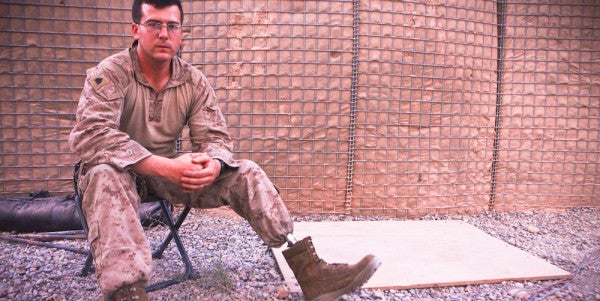 Stephen M. Smith’s application to the Georgia State Patrol last year came with the stipulation that no one would go easy on him because he was an amputee. “They said, ‘That’s awesome that you are trying out, but don’t expect any special treatment,’’’ Smith told the Telegraph, a local Georgia newspaper, in January. “I said, ‘I absolutely don’t expect that. In fact, I would be offended if I did receive special treatment.’ I had to do everything just like everybody else.”

After passing every physical agility test required of state troopers, Smith reported for duty to the Georgia State Troopers Perry Post on Sept. 1, 2014, eight years after he lost a leg in Iraq, according to WMAZ TV-13.

During a patrol near Ramadi in October 2006, Smith, then a sergeant, stepped on an improvised explosive device while on a mission to destroy a sniper hideout. The blast severed his left Achilles tendon, nearly severed his vital femoral artery, broke his femur, and shattered bones throughout his lower leg, according to a II Marine Expeditionary Force press release.

Smith begins to walk with his new prosthetic.

One of his last memories before losing consciousness at the battalion aid station was the moment he received a visit from his brother Clayton, who had recently transferred into the same battalion of the 6th Marine Regiment so the Macon, Georgia, natives could deploy together. “I remember feeling a touch on my shoulder,” Smith told WMAZ TV-13. “Then, my brother's voice. He said, you hang in there, you stubborn SOB.”

When doctors began fixing his severely mangled leg at Landstuhl Medical Center in Germany, Smith was stuck in a horrific middle state of consciousness. “I was unconscious, but I could feel and hear everything around me,” Smith told the II Marine Expeditionary Force. “They were resetting my bone, which stuck out of my leg, and I remember feeling all that pain, but I was like a vegetable — I couldn’t scream, I couldn’t move, I couldn’t do anything.”

At National Naval Medical Center in Bethesda, Maryland, Smith could just barely feel his foot when a doctor touched it with an inquisitive hand. But Smith opted for amputation after doctors told him there was little chance of saving his limb.

After the surgery, Smith was plagued by a succession of high fevers, and the sutures on his leg refused to heal. His doctors were puzzled, until Smith told them about the sewage water he came into contact with on the day of his injury. When Smith hit the ground immediately after the IED explosion, he accidentally swallowed a mouthful of it.

The insurgent IED had already forced doctors to amputate Smith’s leg up to the top of his boot, but an E. coli infection from the sewage water forced them to amputate another three inches.

He arrived at Walter Reed Medical Center in November 2006. Smith waited for the largest bone in his body, his femur, to heal before he could receive his prosthetic limb. He watched frustratedly while other injured veterans received their prosthetics more quickly.

Meanwhile, it seemed like he was haunted by the ghost of his own foot. In the space where it used to be, Smith occasionally felt an irritating itch, or the shooting pain of just having stepped on a nail.

“I was in a wheelchair for two and a half months,” Smith said. “Going to places that were crowded was difficult. Fighting infections, not getting my prosthetic as soon as I wanted to, and then there was the phantom pain.”

Smith’s injury precluded him from returning to the infantry, but he chose to stay in the Marines and received orders to serve as an armorer at School of Infantry East in North Carolina, responsible for repairing and maintaining weapons. Longing to leave his stateside desk job, the Marines granted Smith’s wish to deploy to Afghanistan in 2011 as armory maintenance chief with the 8th Marine Regiment.

“Once I decided to stay in, I just wanted to do my job,” Smith told II Marine Expeditionary Force that year. “It’s all about what you make out of it. Some people accept the fact they are crippled for life, but I’m back in a combat zone.”

Although Smith did not serve in an infantry role during his deployment, the nature of a war with no clear frontline meant he wasn’t out of harm’s way. His vehicle drove over an IED, but that time, Smith walked away from the explosion uninjured, reported WMAZ TV-13.

Smith’s biggest milestone since his injury has come after his service with the Marines, when he was one of 46 cadets to complete 31 weeks of training with the Georgia State Patrol last year. During his August 15 graduation ceremony, Georgia Governor Nathan Deal announced Smith as the first amputee to ever graduate from the Georgia’s school for state troopers, reported The Telegraph.

Thanks to his background with the Marines, Smith was recognized upon graduation with the honor of highest firearm proficiency. He now hits the road in his patrol car within the four-county area covered by his post.

“When the doctors told me I had to make the decision to amputate my leg, I envisioned myself scooting around on my butt for the rest of my life,” Smith told the Telegraph. “I was crushed.”

Thanks to his prosthetic leg, modified to hold his backup firearm, Smith found the determination to stay in shape and excel as a trooper. He proved himself during field training — riding with an experienced trooper to learn firsthand — when a suspect ran from him. Smith and his fellow trooper ran after the suspect, caught up with him, and tackled him together.

Smith recalled what one trooper later told the suspect in custody: “Do you realize you just got outrun by a man with one leg?”

His supervisor, State Patrol Sgt. Craig Smith (no relation), told the Telegraph the rookie never let himself be held back by his prosthetic leg since the moment he applied. “Bottom line is that he has good moral character,” Smith said. “He has proven himself above and beyond since day one.”