What Republicans And Their Army Fought For 150 Years Ago

The Civil War left the nation in shambles, but its soldiers, along with Lincoln’s new Republican Party sought a path... 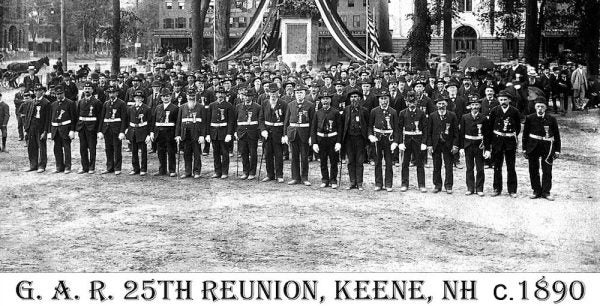 The Civil War left the nation in shambles, but its soldiers, along with Lincoln’s new Republican Party sought a path to recovery. Their response was the creation of the Grand Army of the Republic.

America — though no longer divided into the Union and the Confederacy — faced different kinds of societal fractures. In former wars, families and neighbors banded together to rebuild towns, care for soldiers, and house widows and orphans.

However, the destruction of the Civil War was so widespread that it left the nation in a state of disconnect, according to the Sons of Union Veterans of the Civil War. By the end of the war, military units were less homogenous, and soldiers certainly weren’t friends or neighbors.

Related: The battle hymn that united the North during the Civil War.

On April 6, 1866, Dr. Benjamin F. Stevenson founded the Grand Army of the Republic in Decatur, Illinois. A battlefield surgeon with the 14th Illinois Infantry Regiment, he originally established the organized as a national association to assist disabled Union veterans and the widows of Union soldiers, according to the Smithsonian. Its founding tenets are “Fraternity, Charity and Loyalty.”

Membership was granted to honorably discharged veterans of the Union Army, Navy, Marine Corps, or the Revenue Cutter Service who had served between April 12, 1861, and April 9, 1865.

During the Reconstruction Era, the Grand Army of the Republic helped to rebuild communities, establish soldiers homes and a pension system, and even elect five U.S. presidents.

The Grand Army of the Republic was organized by community “posts,” which had specific rules and were named for fallen comrades. Encompassing those were the departments, which consisted of all the posts in a state. Each one had an elected commander to oversee activity. The members also adopted Masonic rituals of inter-group governance.

Parade of the Grand Army of the Republic during the 1914 meeting in Detroit, MichiganPhoto courtesy of Detroit Publishing Company

The group, which became a powerful extension of the Republican Party, was intertwined in heated political races and disputes, and lobbied for the black vote. The soldiers involved recognized African Americans as brothers in arms, who fought valiantly beside them and felt they, as patriots, deserved the right to participate in elections.

It would also grow to be one of the first racially integrated fraternal organizations in the United States, and any Republican seeking office could not be elected without the endorsement of the Grand Army of the Republic.

In 1868, Commander-in-Chief John A. Logan issued an order to set aside May 30 as a day for remembering the sacrifices of fallen comrades, which provided the basis for our modern-day version Memorial Day.

Due to its strict Civil War veteran membership rules, however, the Grand Republican Army was forced to name an heir organization to carry on its legacy. It chose the Sons of Union Veterans of the Civil War.

The organization closed when Albert Woolson, the last Union soldier, died in 1959.