On Feb. 28, 1967, while on patrol outside of a village in Quang Tri Province, Vietnam, Marine Pfc. James Anderson’s... 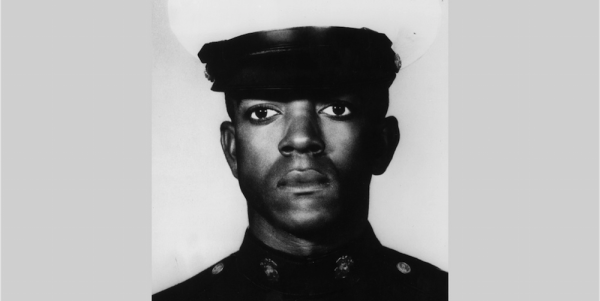 On Feb. 28, 1967, while on patrol outside of a village in Quang Tri Province, Vietnam, Marine Pfc. James Anderson’s platoon was ambushed and came under heavy enemy fire. In the ensuing battle, an enemy grenade landed near Anderson and his fellow Marines. Without hesitation, Anderson pulled the grenade to his chest, curled his body around it, and absorbed the majority of the blast, giving his life to save his brothers-in-arms.

He turned 20 years old one month before he died.

For his heroism and selfless sacrifice, Anderson was posthumously awarded the Medal of Honor on Aug. 21, 1968, making him the first African-American Marine to receive the nation’s highest honor. The fact that Anderson was the first black Marine to receive the award, though certainly not the first to show bravery or heroism in combat, may have been due to the military’s history of racial segregation, which officially ended when all of the armed services were forced to desegregate in 1948. However, full integration and racial equality within the ranks would take much longer. Racial tensions within the military would remain high for years to come, especially during the Vietnam War, which coincided with the Civil Rights Movement of the 1960s.

At a time when race is once again at the center of national debate and controversy, it’s important to remember men like James Anderson, whose actions show that courage and sacrifice are not a matter of race, but are in fact black and white.

Anderson’s parents were presented the award by then-Secretary of the Navy Paul R. Ignatius, who was acting on behalf of President Lyndon B. Johnson, and the citation was read by the then-commandant of the Marine Corps Gen. Leonard F. Chapman.

Born Jan. 22, 1947, in Los Angeles, California, Anderson attended junior college briefly before enlisting in the Marines in 1966. According to a profile of Anderson on MarineParents.com, after completing recruit training at Marine Corps Recruit Depot San Diego, and follow-on training as a Marine rifleman at Camp Pendleton, San Diego, Anderson was attached to 2nd Platoon, Company F, 2nd Battalion, 3rd Marines.

He arrived in Vietnam December 1966, and was killed in action just two months later.

In 1983, the U.S. Navy renamed an acquired Danish merchant ship, the Emma Maersk, in honor of Anderson, which carried equipment in support of Marine Corps operations until 2009, when it was sold for scrapping. The James Anderson Jr. memorial park in Carson, California, was also named in his honor.

It seems an ill-fitting way to treat the memory of a Marine who kept with the highest traditions of his service: placing the safety of his brothers above his own survival. However, his selfless example lives on to this day.

In total, 89 African-American service members have been awarded the Medal of Honor, with the most recentbeing Henry Johnson, who posthumously received the award on June 2, for his bravery in close-quarters battle against German soldiers during World War I. According to the Congressional Medal of Honor Society, four other black Marines received the award during the Vietnam War: Pfc. Oscar Austin, Sgt. Rodney Davis, Pfc. Robert Jenkins, and Pfc. Ralph Johnson.

CORRECTION: This article incorrectly listed Henry Lincoln Anderson as the most recent African-American to be awarded the Medal of Honor, it was Henry Johnson. (8/21/2015; 7:48 am)