After more than four decades, two acts of bravery by U.S. Army soldiers in Vietnam were recognized by President Barack... 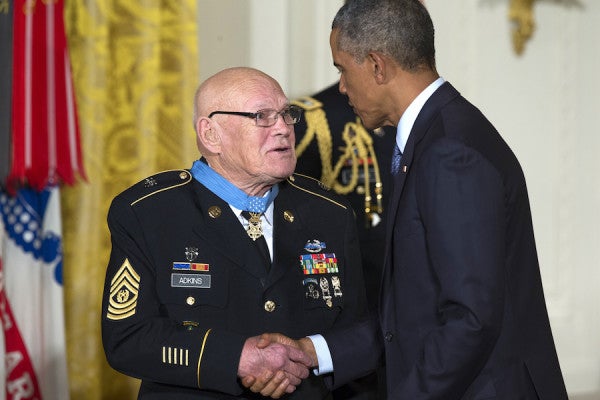 After more than four decades, two acts of bravery by U.S. Army soldiers in Vietnam were recognized by President Barack Obama with the awarding of the Medal of Honor on Monday at the White House.

“Sometimes even the most extraordinary stories can get lost in the fog of war or the passage of time,” Obama said. “When new evidence comes to light, certain actions can be reconsidered for this honor, and it is entirely right and proper that we have done so.”

Retired Command Sgt. Maj. Bennie G. Adkins survived the war despite three tours of duty with Special Forces and numerous wounds, while Spc. Donald P. Sloat was killed a few months into his first tour. Both gave their all to their military comrades.

Adkins was drafted from Waurika, Oklahoma, in 1956 as an administrative clerk-typist, but apparently the Army suited him better. He went on to join Special Forces in 1961, deploying to Vietnam early in the war in 1963.

It was during his second tour on Mar. 9, 1966, with the 5th Special Forces Group that he was involved in fierce fighting as several thousand North Vietnamese and Viet Cong forces attempting to overrun his camp in the notorious A Shau Valley.

For the next 38 hours, Adkins and his comrades desperately defended the camp mortar pit, with Adkins exposing himself to intense enemy fire as he helped evacuate wounded to waiting choppers and retrieve air-dropped supplies. While fighting off wave after wave of enemy fire, he was also pounded by mortars.

“Three times, explosions blasted him out of that mortar pit, and three times, he returned,” Obama said.

By the next day, Adkins was the only man left able to fire the mortar. After the ammunition ran out, he dug a hole out the back of the pit and led the small group of survivors and wounded as they fought their way out of the camp, but missed the last evacuation chopper. For 48 hours, the group evaded the enemy in the jungle until a rescue chopper could reach them. Adkins was wounded 18 times, and killed as many as 175 of the enemy.

Spc. Sloat joined the Army in 1969 out of Coweta, Oklahoma, after failing his physical multiple times, but kept trying until he finally passed. He was assigned as a machine gunner with the 2nd Battalion, 1st Infantry Regiment and deployed to Vietnam that same year.

After only a few months in country, Sloat’s squad was patrolling in the Que Son Valley as a blocking force when they came under fire. As the squad moved forward, the point man tripped a wire and a hand grenade rolled down the hill toward the squad.

Sloat managed to grab the grenade, but surrounded by soldiers, he had no place or time to toss it. He held it close to his body and fell on it, shielding his nearby comrades from the explosion. “I was only 5 to 8 feet behind Don, when the grenade went off. His act saved my life,” former Pfc. DeWayne C. Lewis said of the event.

“Specialist Four Sloat’s actions define the ultimate sacrifice of laying down his own life in order to save the lives of his comrades,” the president said.

Normally a recommendation for the Medal of Honor needs to be made within two years of the event, and the medal presented inside of three. But Congress has been known to make special exemptions for old cases.

An 80-year-old Adkins was present at the event with his family, along with the family of Sloat. “What I attribute this to is not my actions, but the actions of the other 16 Americans who were with us,” Adkins said in an Army interview last week “It is not a faint memory. I can tell you every man who was there and the five who lost their lives. I can tell you how it happened. It diminishes, but it does not go away.”