UNSUNG HEROES: The Staff Sergeant Who Prevented The Taliban From Overrunning His Outpost

On Aug. 22, 2007, Staff Sgt. Erich R. Phillips was asleep in a remote outpost in the mountains of Afghanistan... 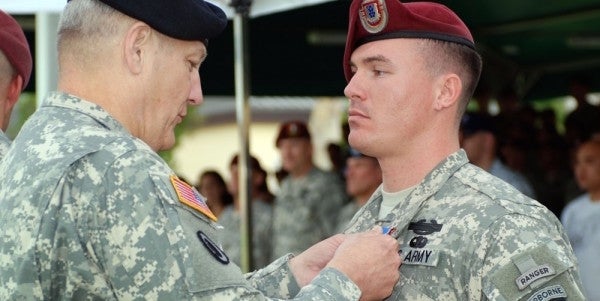 On Aug. 22, 2007, Staff Sgt. Erich R. Phillips was asleep in a remote outpost in the mountains of Afghanistan when the Taliban launched an assault on his compound. Phillips quickly organized his men to repel the attackers, and protected his outpost from the attacking force much larger and better equipped than his own.

Around 5 a.m., two soldiers ran into Phillips’ room to alert him to the attack, but he was already on the move. “I was asleep in my bunk,” Phillips told Stars and Stripes. “I woke up to slamming into the side of my building.”

Between 60–80 Taliban fighters had drafted a well-prepared, three-pronged attack using detailed mapping of the compound, the Army later found. A video was posted online of the fighters preparing for the assault on a website belonging to Taliban extremists. “Their plan was to overrun our forward operation base,” said Phillips. Only 22 American soldiers were there at the time, working alongside Afghan National Army soldiers. Small-arms fire and rocket-propelled grenades were flying at every defended position. They were outnumbered and outgunned.

Taliban fighters quickly breached the perimeter and overtook a weapons and ammo cache belonging to the Afghan National Army and an Afghan private security firm. They quickly used those weapons to augment their attack.

Phillips organized the men around the outpost’s tactical operations center, even though it was clear the soldiers were outnumbered. Machine gun, small-arms, and rocket-propelled grenade fire continued to hit outpost.

He began to relay information to 1st Lt. Matthew Ferrara, the platoon leader, who was on the radio calling in artillery and close-air support, but the Taliban quickly destroyed the radio antenna. According to his citation, Phillips employed the 60-mm mortars in response to Taliban fire. Ferrara moved the operations center outside and got communications back using a dismounted radio.

Hearing of casualties, Phillips took the platoon medic, Sgt. Kyle Dirkintis, and began to run toward Post 2. The other soldiers used hand grenades and small-arms fire to cover their movement, but they were pinned down next to the living quarters near the destination.

“At this point, Soldiers at Post 2 yelled down to me that two enemy fighters were on the other end of the building I was taking cover on,” said Phillips.

From only three meters away, Phillips rolled two hand grenades over the roof.

“Once the explosion went off doc (Dirkintis) realized how bad we were taking fire and he came from behind cover to fire and was shot in the chest,” Phillips told the Army. Post 2 provided covering fire as Phillips dragged Dirkintis down a hill. Reaching a mortar pit, he began to perform first aid. Dirkintis was coughing up blood from a collapsed lung.

Directing another soldier to treat the wounded medic, Phillips began firing and directing his platoon’s grenades toward the Taliban. An A-10 Warthog arrived and began to strafe the base.

The Air Force attack plane was crucial in repelling the Taliban that until this point was actively advancing. Phillips was able to lead a team to recover the injured Deloria, who had been trapped under Post 3 for over two hours.

“Once I climbed the ladder to Post 3 I could see the post had taken severe damage and had fallen on top of Deloria,” recounted Phillips. “Deloria had attempted to blow all four claymore mines. He even applied first aid to himself and was holding his weapon when I found him.”

Phillips tried to carry Deloria back down to the casualty collection point, but Deloria stopped him.

“I want to walk sergeant,” the injured soldier said.

Phillips prepped the wounded for evacuation and personally assured their departure until the quick reaction force arrived. Phillips immediately led the group to retake the lost sections of the base.

When the battle was over, two Afghan soldiers were killed — one contractor and one soldier — and half the American soldiers were wounded, but all survived. The base was not overrun. “We didn’t allow them,” Phillips told Stars and Stripes. “We fought hard.”

“I just tried to maintain the front line,” Phillips told the Army. “The other Soldiers deserve just as much recognition as me.”