Afghan Food Was One Great Thing About Deployment

One thing about Afghanistan that I miss is the food. Not the chow hall food. I don't miss it. Not... 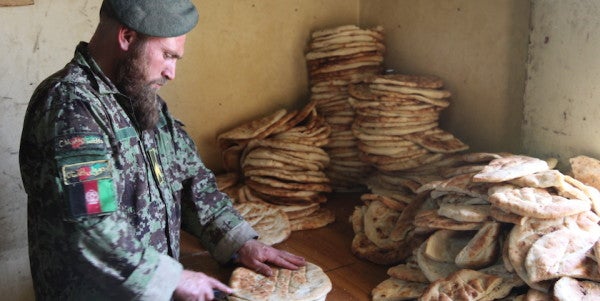 One thing about Afghanistan that I miss is the food. Not the chow hall food. I don't miss it. Not by a long shot. Your average Nigerian or Albanian KBR worker doesn't quite understand American food enough to take it beyond adequate. I'm talking the Afghan food. It was tremendous.

The naan was great, phenomenal when it was still warm. Every Afghan National Army unit had its own tandoor it baked naan in. The Afghans hold naan sacred. As well they should. Its very creation is an act of reverence for the ingredients. I remember one of our terps scrambling to pick up scraps of naan that had blown off the hood of our Humvee in a gust of wind.

One of the benefits of being assigned to an embedded training team was eating in their officers’ mess when we went to their camp. I recall a dish of stewed tomatoes and okra that was simply out of sight. Served room temperature, the red and green contrasted sharply. These were not mass-produced tomatoes like you find at an American supermarket. These were the real deal. As a junkie for home-grown tomatoes, I loved it. I'm nuts over okra, too. So it was a win-win.

The meat stew they served pretty much for every meal we called “goat knuckle soup.” Sometimes there were small bones in the meat, way too small to be beef or anything else with hooves. We didn't mind. It was a delicious mystery.

The sandwiches our interpreters would get in town and bring back to eat with us at the FOB were good, too. They were usually chicken or lamb, wrapped in naan or something more like a pita. Fresh cucumber and other vegetables, and a spicy sauce rounded them out. They were a nice change from everything fried in our chow hall.

Only rarely did I get any local sweets. They were almost all pistachio-studded, and honey-laced. I'm pretty sure the commercially packaged stuff was made in Iran. Being in the west of the country, this seemed likely. My favorite was almost like peanut brittle but with pistachios. Plus, I think it had a dusting of cardamom and other spices.

I'd be remiss if I didn't mention the other food I experienced over there. I gained an appreciation for authentic Italian food at their chow hall at the Herat airfield. I'll never forget the jamón ibéricothe Spanish kept in their airfield ops office. They made sandwiches with crusty bread, tomato and a thin smear of mayo. They made paella in a huge, rough-hewn pan they must have brought with them. It was right out back of their office, over a propane burner. Churro and chocolate caliente made over a hot plate. But those are memories for another time. I can probably go to St. Louis and experience all of that.

I will never experience Afghan food in that way again. There are too many variables to replicate the experience. The places. The people. Me. We've all changed. That's just how it is. I doubt I'll come across an Afghan restaurant any time soon, anyway. I miss it all.