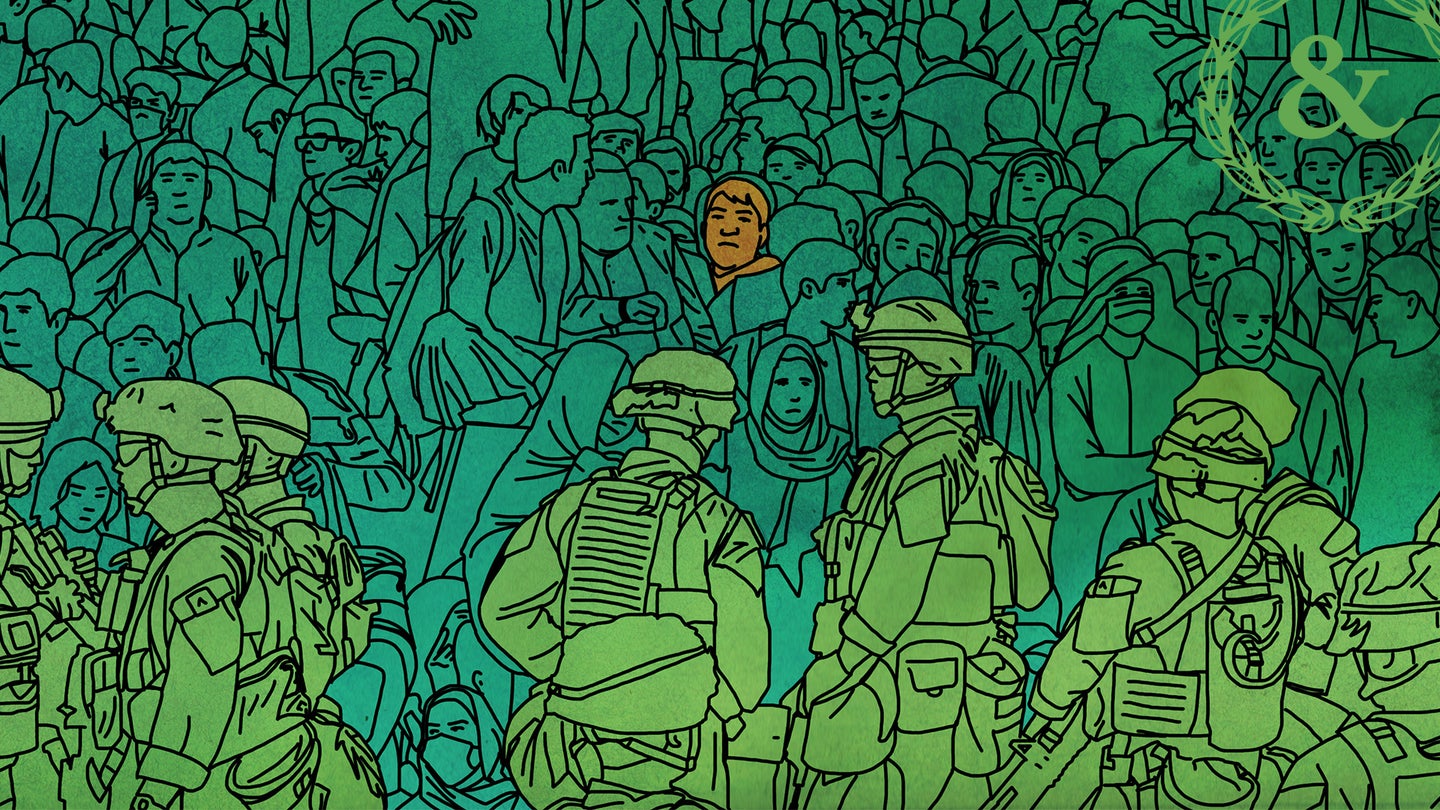 Marines guarding the gate at Hamid Karzai International Airport search for an Afghan interpreter in the crowd. (Task and Purpose Illustration by Aaron Provost).
SHARE

Stories matter. For good or ill, we construct our lives from the collective stories of our society, both personal and communal. A sense of shame and sorrow pervades the story of America’s withdrawal from Afghanistan. It is a story of failure, broken promises, and ineptitude. But that’s not the whole story.

Interwoven among our glaring failures are stories of triumph and steadfastness. When our leadership decided it was time to renege on our commitment to our allies in Afghanistan, there were those among the American ranks who refused to forget our promises. With the literary assistance of Russell Worth Parker, Thomas Schueman and Zainullah “Zak” Zaki tell a story of those who refuse to forget, and, as the title clearly states, remain Always Faithful.

The book tells the story of Schueman, a Marine major, and his frantic attempts to get Zak, his former interpreter, out of Afghanistan along with Zak’s family as the Taliban took over the country last August. But it’s more than just the story of a daring rescue; it’s the story of two men who forged a years-long friendship that helped them both defy fate.

Tom, Zak, and Worth had a hell of a story to tell in Always Faithful, and to be honest, it is so damned compelling as a straight-ahead account of a Marine infantry officer and his Afghan interpreter who forge a brotherhood in the crucible of combat, that they could have just written it as such. But that’s not what they did. Instead, what they’ve gifted the post-9/11 literary canon is a moving narrative about the power of belief and what it truly means to adhere to a principle.

With a title like Always Faithful, I initially raised a skeptical eyebrow, thinking that the book would be a bombardment of thinly veiled propaganda and hollow recruitment slogans. And again, they could have written that book. But it would have been bullshit. And bullshit gets forgotten within a few news cycles. Always Faithful is not bullshit. Any rah-rah Marine Corps jargon is treated with honesty and self-awareness, as the men who speak it are true believers. Tom and Zak show in their work that the impossible is, in fact, achievable, so long as one always remains faithful to the ideal.

Always Faithful is a braided memoir of two lives that intersect at pivotal moments. Tom and Zak write of the chaos of their younger lives and the subsequent beauty that arose from the carnage. Tom’s prose is both direct and profound as he grapples with what it means to be a man and Marine in modern society. At the same time, Worth transcribes Zak’s life onto the page with a literary deftness that allows the reader to create an empathetic connection with Zak and his family. The book begins with a warrior’s dream that lives inside the collective memory of GWOT-era warfighters:

I still dreamt of Sangin in those days. I’d see bullets dancing across the surface of an irrigation canal as Marines hugged the side to escape them. I’d smell ammonia and smoke and hear the screams of a wounded man. And then, I’d wake suddenly to find my wife in bed next to me and our children asleep in our home.

It is a dream that opens a book that is, in large part, a story of two idealists who dreamt of what the world could be. For Schueman, it was the dream of the warrior’s life and his idea of what America is and should be. For Zak, it was the dream of freedom and a world where his family would have the simple, but elemental liberty to choose how they lived. Such dreams would set these two men on separate paths that collided in a land of complex ambushes and IEDs, a place filled with hate and love, an area that had been swallowing empires for millennia.

Before the reader is introduced to the realities of ground combat in Afghanistan, the book reveals the origins of the two men that carry this story. It is here that an underlying truth about parents and children is revealed: parents give their children the psychic armor that they will wear into life’s combat. For Schueman, it was a hard-nosed mother who didn’t take any of his shit, but instead offered him this plate armor to carry forward into life: “Thomas, never forget that you’re a beautiful boy who can do anything.” And that’s what we see from the book: A man who moves mountains because he thinks he can, all the while ignoring the harsh reality that is forced upon him. For Zak, we see that he is from a family of faith and hard work, a family of people who believe in a better world. Zak carries these beliefs with him as a shield against the world’s many cruelties.

The part of the book which takes place during the childhoods of both men is essential. For by the time the book arrives in the combat of Sangin, the reader is left with the anticipation and anxiety of seeing if the armor will withstand the fire. The 3rd Battalion, 5th Marines deployment to Afghanistan in 2010 was a horrorshow where the ground itself would open its earthen maw to swallow men and psyches whole. It was a theater where an IED was rarely just an IED, but the first death blossom of a complex ambush executed by hard mountain men who have only ever known war. As an aging grunt from the Iraq War, I found a transcendent truth in the pages as I read of the Dark Horse charging into the valley. Schueman reveals the hidden cry of the infantryman in the land of IEDs: “Is my dick still there?” This truth is a terrible echo that reverberates through the Global War on Terror era.

Though the combat is both thrilling and tragic, it all leads to the crescendo of Zak and his family escaping from Afghanistan. The book builds at a methodical pace and sprints to the finish line as the Taliban begins to take province after province. The book also gives us a glimpse at the heroes on the wall who stood watch until the bitter end, risking their lives and bodies to save just one more.

I don’t think I have ever been more proud of being a Marine as I was when I watched those young Marines risking everything to save babies. Critics can write volumes about the erosion of the American Ideal, but those young Marines demonstrated that it’s as alive as it has ever been. So too do Tom and Zak show us that even if the United States government isn’t willing to uphold the standard, we can keep the ideal alive with our actions. This book is an opportunity to reflect on the type of person that joins the Marine Corps and volunteers to stand between us and the all-consuming chaos of war.

I never set foot in Afghanistan. It’s a fact of my life that will haunt me for the rest of my days. After two combat deployments to Iraq, I let my Marines go to war without me as I started a family. While Afghanistan devoured itself during the withdrawal under the incompetent supervision of America, I watched my Marines, who’d become Afghanistan vets, suffer. Again, I didn’t do much. All I did was say that I was here and always would be. I watched them reliving nightmares and feeling the existential weight of watching their sacrifices abandoned by the country they swore to serve. This was my small connection to the war, and as any good story will do, Always Faithful made me think of my own story. But not just that, it made me think of my agency in my story, and the mountains that we can move if we hold the line and remain Always Faithful, both as individuals and as a nation. Always Faithful is the story America desperately needs right now. It’s a story that we can use to remember the brave Americans who held the line and didn’t forget about our allies who stood shoulder to shoulder with us in the fray.

I’ve never said anything better than Karl Marlantes, former Marine platoon leader and author of the Vietnam War novel Matterhorn, so I will leave it to him if you need another reason to pick up a copy of this book. He said that Always Faithful “is just plain old good writing.” I’m not sure higher praise is possible.

Kacy Tellessen served as a machine-gunner with Second Battalion, Third Marines from 2005 to 2009. He is the author of Freaks of a Feather: a Marine Grunt’s Memoir. He lives in Spangle, Wash., with his wife and two children.