UNSUNG HEROES: The Marine Who Took A Round To The Head Saving His Men In Ramadi

25-year-old Marine 1st Lt. David Russell wasn’t expecting a fight in the moments before the battle that’d ultimately earn him... 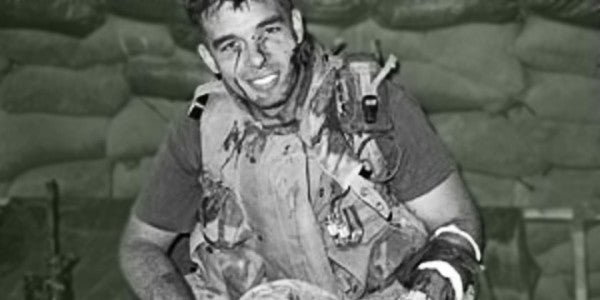 25-year-old Marine 1st Lt. David Russell wasn’t expecting a fight in the moments before the battle that’d ultimately earn him the military’s third-highest award for valor. In fact, he was shaving his face when the first grenade exploded just beyond the wall of sandbags that stood between his platoon’s command-and-control building and the embattled streets of Ramadi, where hit-and-run attacks on American troops frequently occurred. But the sound of heavy-machine gunfire told Russell this attack was of a different nature. The enemy was determined, and close.

Ramadi in 2005 was one of the most dangerous places on Earth. Following the Second Battle of Fallujah, the capital city of Iraq’s Anbar province had swelled with insurgents loyal to Abu Musab al Zarqawi, who served as the commander of Al Qaeda in Iraq until his death in 2006. But before he was killed by a pair of laser-guided American bombs, Zarqawi transformed Ramadi into an apocalyptic battleground where U.S. soldiers and Marines fought around the clock. But nothing could’ve prepared Russell for the events of May 3, 2005. So he improvised.

Outside the command-and-control building, there was a traffic-control point manned by Russell’s Marines, and, as he soon discovered, it was there that the enemy attack was focused. It wasn’t clear how many insurgents there were, but when the lone Marine manning the bunker at the entrance of the traffic-control point radioed in to say that he was running out of ammo, Russell realized the gravity of the situation. Russell and another Marine, Sgt. Timothy Cyparski, decided to run ammo out to the bunker. This would give them an opportunity to find out how many insurgents they were up against.

Between the command building and the bunker was 75 meters of wide open ground, across which Russell and Cyparksi would have to sprint to resupply the lone Marine. Later, in an interview with GQ, Russell explained that his goal was to draw fire to expose the insurgents’ positions. It worked. As the duo hustled across the open ground, an insurgent popped up, his AK-47 aimed at Russell. Fortunately, it jammed, and the Marines made it to the bunker, spotting a few more insurgents along the way.

The fire directed at the bunker was so overwhelming that Russell suffered shrapnel wounds to the arms and face. But he decided to engage the enemy with his rifle anyway. He popped up and a 7.62 round struck his helmet, knocking him to the ground with a concussion and a bloody face. The bullet had penetrated the kevlar but not his skull. It took Russell a few moments to realize that he wasn’t dead. Then he jumped back into action. But by that point the damage was done — not to the Marines, but to the enemy. In their attempt to kill Russell, the insurgents had exposed themselves to the Americans on the second floor of the command building who then turned the vehicle-search area into a mass grave.

Thirteen insurgents were killed in the battle and not a single Marine. For his actions that day, Russell was awarded the Silver Star, which is a grade higher than the Bronze Star he had earned for heroism in Fallujah just six months before. “When someone wins a medal, it’s because something went terribly wrong,” he told GQ. “Medals are a hundred percent about being in the wrong place the wrong time with the right people.”