UNSUNG HEROES: The Soldier Who Took A Bullet To The Head And Kept Fighting

On March 2, 2005, Master Sgt. Sarun Sar’s Black Hawk was sent to the Paktika province along the Pakistan-Afghanistan border.... 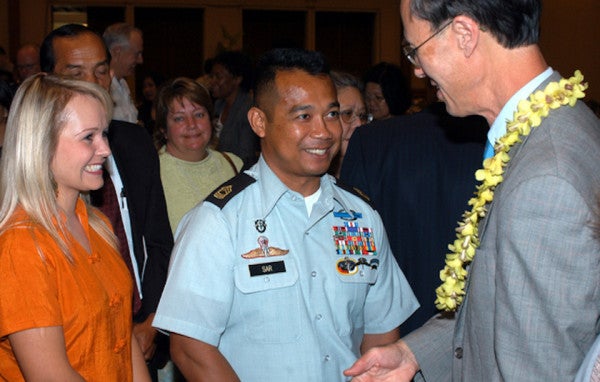 On March 2, 2005, Master Sgt. Sarun Sar’s Black Hawk was sent to the Paktika province along the Pakistan-Afghanistan border. His unit, Special Forces Operational Detachment Alpha 732, 7th Special Forces Group Airborne, was on a reconnaissance mission to examine a suspicious group of buildings with two choppers.

According to Sar, “When the first bird landed on the north side of the ridge, it received fire. I saw the whole thing because we were a few seconds behind them. We landed and leapt out of the helicopter, and I told my guys to follow me and started running toward the enemy.”

Separated from the rest of their teammates, Sar and his medic went after insurgents who ran toward the village. They decided they had to act quickly to protect civilians in the village and members of the unit.

On the other side of the ridge, they were trapped near one of the village houses with one of the enemy fighters inside, while the rest of the team was attacked by enemy fire at the bottom of the snowy hill.

Loading his M4, Sar entered the house, where he was greeted by two shots. They narrowly missed him. But third hit him square in the forehead.

He blacked out immediately.

“I will never forget that little flash I saw,” Sar said. “He was waiting. It felt like I was hit in the head with a hammer.”

But the medic found no entry point, no bullet. Miraculously, it struck the lower edge of Sar’s Kevlar helmet, sparing him. Recovering quickly after realizing he was not injured, Sar shot and killed the man who fired on him first.

Sar and the medic then resumed their charge up the mountain, stopping the Taliban ambush.

In an interview with Voice of America, Sar said, “Of course I was scared, but I am their leader and as their leader I have to protect my soldiers. I must lead the group —this is the rule. I love the soldiers even more than my own family — because we depend on each other for our lives when we are at war.”

Having overcome the intense attack, the team was then able to clear the village. There, they found a stockpile of weapons, including rocket-propelled grenades, bomb-making materials, and other explosives.

For his efforts that day, Sar was awarded the Silver Star.

Combat, however, was a lifelong experience for Sar. Born in Cambodia in 1966 during the Khmer Rouge era, he joined the anti-Vietnamese guerillas when he was very young.

According to his citation, Sar was wounded in action several times in Cambodia, and then sent to a refugee camp in Thailand to recover. There he was reunited with his older sister and her two children. After the war, they moved to the United States.

He joined the U.S. Army, became a citizen, and was later selected to join the Special Forces.

During his 20-year military career, Sar served in the first Gulf War, and has deployed to Thailand, Cambodia, Bosnia, Kosovo, Africa, Colombia, and Afghanistan during his various assignments.

Since 2005, he has been very outspoken in interviews about loyalty to country, respect for fellow service members, and willingness to sacrifice his life for his brothers in arms.