UNSUNG HEROES: This Soldier Killed 11 Insurgents While Bleeding From A Severed Artery

On Aug. 8, 2007, then-Spc. Jeremiah Church was assigned as a reconnaissance platoon machine gunner with the 82d Airborne Division.... 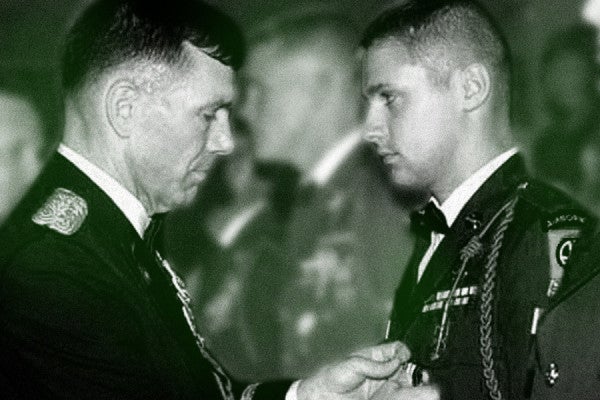 On Aug. 8, 2007, then-Spc. Jeremiah Church was assigned as a reconnaissance platoon machine gunner with the 82d Airborne Division.

The group’s mission was to restore the flow of water to a village near Baqubah, Iraq; however, they were met by an insurgent ambush.

Church told journalist Tim Holbert, “It might sound a little crazy, but the hair on the back of my neck was standing up, and something didn’t feel right in my stomach.”

As his 11-truck convoy moved out, Church was manning the .50-caliber machine gun on the second truck, following an Iraqi police pick-up truck.

The vehicle was carrying the local village mayor and his armed escort.

As they drove down a small canal road, Church spotted a machine gun nest between two buildings. The convoy was then attacked by heavy fire from a Soviet-era Russian machine gun mounted in a technical vehicle 200 meters away.

Rounds impacted on and around his vehicle, destroyed the pick-up truck and killed one of the Iraqi police instantly. Because of the terrain, Church was the only gunner in position to accurately fire at the insurgent forces. But soon after, a barrage of fire came from the trenches surrounding the convoy.

More than 30 insurgents were firing around the platoon.

As bullets flew in all directions, one went right through Church’s wrist and severed his artery.

“I had never been shot before,” Church added. “When I got shot I looked at my arm, and some pretty colorful language came out of my mouth. I guess the thought I had going through my head was, ‘You ! I shoot you, you don’t shoot me!’”

He quickly tourniqueted the wound and fired an entire magazine at insurgents holding positions around the convey’s escape route.

Church continued to shoot, even leaving the Humvee to gather more ammunition. He put his hand inside the turret so the forward observer could apply pressure to his to the hole in his wrist, according to his citation.

He began firing at the mounted machine gun, which allowed the convoy to turn around on the canal road.

The citation reads, “Now reloaded, with rounds bouncing inside of his turret, Specialist Church began again engaging the that now had his platoon pinned down.”

What he didn’t realize, however, was that while the tourniquet and pressure helped with his wrist, it didn’t take care of the artery that had now severed up to his elbow.

Eventually, Church hemorrhaged and passed out, but not before he took out 11 enemy fighters.

When he came to, he immediately began handing the new gunner ammunition.

Church's efforts were directly responsible for destroying an enemy machine gun, in addition to killing 11 insurgents and helping to free up an escape route for his unit.

For his efforts, he was awarded the Silver Star in December 2007.

Church told Holbert that he was surprised to receive the award for his actions that day, “until I realized just how much it actually meant to the people around me.“