When Staff Sgt. Jeffery Dawson joined an assault force to kill or capture a high-value Taliban leader in Kandahar, Afghanistan,... 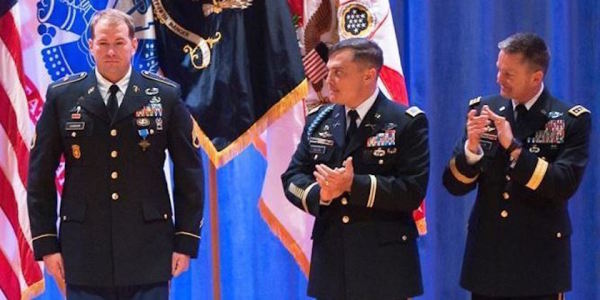 When Staff Sgt. Jeffery Dawson joined an assault force to kill or capture a high-value Taliban leader in Kandahar, Afghanistan, he thought the mission would be quick and easy.

“Upon infiltration everything changed in minutes,” Dawson, of the Army’s 28th Ordnance Company, recalled in an Army news release.

On the night of Oct. 5, 2013, three explosions rocked the gate of the enemy compound nearly simultaneously, including the detonation of two pressure plate-initiated improvised explosive devices and a suicide vest worn by a female inhabitant. Eight soldiers with the assault force were wounded in the blasts, but Dawson wasn’t anywhere near them; he was chasing an insurgent who fled the compound.

As Dawson and other soldiers closed in, the insurgent detonated another suicide vest, killing himself and a military working dog named Jani. Fragmentation from the explosion significantly wounded Dawson’s legs, but as the only EOD technician present, he knew he still had a job to do.

Checking for more IEDs, he cleared a route back to the compound. There, in the process of treating the wounded from the first three blasts, soldiers triggered another string of pressure-plate IEDs. A combat nurse assigned to a special operations cultural support team was killed instantly as she moved to provide aid to a wounded teammate. Moments later, two more soldiers were fatally wounded by IEDs on their way to treat another wounded comrade. Elsewhere, another soldier assisting with the evacuation of casualties to a helicopter was critically wounded by blasts.

That made seven IED and two suicide detonations, and there seemed to be no end in sight. The strike force realized it was in the middle of a complex defensive pressure plate-initiated IED belt, according to Dawson’s Distinguished Service Cross citation.

Forgetting his wounds, Dawson focused on finding a way to retrieve and provide aid to the many wounded and dead soldiers literally surrounded by IEDs. The EOD technician’s exhaustive citation reads like a laundry list of methodical advances, foot after foot.

First, he cleared a 30-foot path to Sgt. Joseph Peters, whose legs had been torn off in a blast; then a 10-foot path to Pfc. Benjamin Pinnick, who had fallen “directly in the center of the entire IED belt,” Dawson told Army Times; and an additional 20 feet to the body of Spc. Cody Patterson, who he personally carried to the casualty collection point; finally a 25-foot path toward the body of 1st Lt. Jennifer Moreno.

While on his way to Moreno, Dawson discovered three pressure-plate IEDs while continuously adjusting his clearance route.

“The IEDs were identified by wires he uncovered with a barely visible trail to a patch of disturbed earth, assessed to be a main charge with a low metallic content pressure plate on top of it,” reads the award citation. “This scenario, one of the most complex in explosive detection, required Sergeant Dawson to repeatedly expose himself to active PPIEDs under limited visibility conditions.”

Dawson recommended a halt to movement as he alone set out to clear a path to the helicopter landing zone, using his metal detector and chemical lights, since so much of the team’s night vision equipment had been damaged in the explosions.

“His markings of safe paths ensured efficient movement across the objective and limited additional casualties, as members of the assault force continued to maneuver in an effort to render aid,” the award citation reads.

While returning to the casualty collection point, a fellow team member triggered yet another IED, losing both legs to the blast. Only five feet from the detonation, Dawson again suffered significant shrapnel wounds along with a ruptured eardrum.

Although wounded by two detonations, Dawson immediately began providing aid to his comrade who had triggered the tenth detonation of the mission. First he tried to apply a tourniquet, but when that broke, he placed lifesaving pressure to the femoral arteries while a medic applied a second tourniquet.

Dawson then called for another strict halt to movement across the entire strike force and transferred information and control to newly arrived EOD technicians. As Dawson worked with them to develop a plan to safely extract the assault force, the senior EOD technician realized the extent of Dawson’s injuries and ordered him to leave with the next helicopter. Dawson complied and moved to the helicopter without assistance.

“Sergeant Dawson remained on the objective for over two hours traversing an ambiguous and chaotic objective where he located three confirmed PPIEDs and an additional six suspected devices,” states his citation.

In all, four soldiers were killed and 40 wounded, but the toll would have been far worse if Dawson hadn’t cleared several paths for medics and reinforcements.

Despite literally being surrounded by IEDs and wounded soldiers for two hours in the dark, Dawson recalled a momentary scene of beauty that inspired him to keep going.

Dawson told the Army, “I remember looking around at all the devastation and seeing American flags draped over casualties in an effort to help keep them warm.”