Army wife and fitness enthusiast Naomi Jael Covert attended a wedding and posted a breastfeeding photo to her Instagram. The... 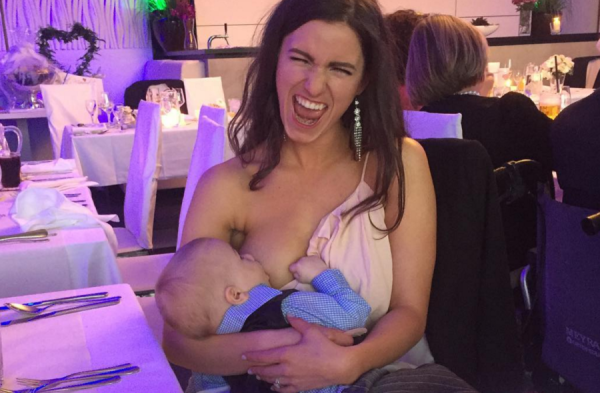 Army wife and fitness enthusiast Naomi Jael Covert attended a wedding and posted a breastfeeding photo to her Instagram.

The photo was reposted on empoweredbirthproject’s Instagram account, which has over 170,000 followers, and the photo has since garnered more than 12,000 likes.

The 21-year-old from Vilseck, Germany is a U.S. Army wife. Her husband is reportedly currently deployed for 9 months, and the two have a 10-month-old son, TJ, who is featured in the photo.

She told Buzzfeed, “I wanted to show that it’s literally no big deal to breastfeed, no matter the circumstances.”

The caption on empoweredbirthproject’s post reads in part: “That's right mama, you feed that baby wherever and whenever he needs to eat. Show 'em how it's done … When you are at a wedding, wear fancy dresses and high heels … and your baby gets hungry, well… You give no shits and feed the kid.”

The military is notorious for its taboo approach to service members breastfeeding. Moreover, the topic of women breastfeeding in public has been the cause of broader cultural controversy in the civilian world.

And while Covert received many positive comments on the photo, others felt she should cover up or pump and bring a bottle instead.

However, as Covert told Buzzfeed, “It’s just normal – you have conversations with people while feeding the child.”

She added, “It is nothing sexual. It’s just another person eating.”