The A-10 Warthog Just Got A Little More Badass

Since the A-10 Warthog, recently seemingly destined for the scrap yard, is now engaging enemy Islamic State fighters in Iraq... 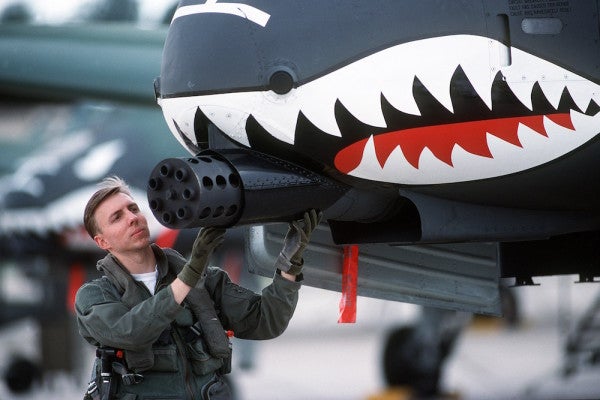 Since the A-10 Warthog, recently seemingly destined for the scrap yard, is now engaging enemy Islamic State fighters in Iraq and Taliban forces in Afghanistan in the form of a new weapon with a badass name — the Advanced Precision Kill Weapon System.

Manufactured by BAE Systems, the APKWS is equipped with laser-guided rockets, giving A-10 aircraft in Afghanistan a “deep magazine of high-precision weapons,” according to Popular Mechanics.

One of the biggest advantages to using this system is the minimal collateral damage left when fired, which is a result of its tiny warhead.

In addition, it’s lighter — which means that the A-10 can carry 38 of these, instead of the two 500-pound bombs it carried before.

According to a statement from BAE, the new kit transforms a standard unguided munition into a precision laser-guided rocket.

Though this is the first time the system has been employed on one of the Air Force’s fixed-wing craft, “it has proven highly successful for the Navy and Marine Corps since 2012, and has also been used by U.S. Army Apache helicopters in combat.”

The Marine Corps started fielding the APKWS on AV-8B Harriers while the Army outfitted the AH-64 Apaches with it.

The upgrade also fits the Pentagon’s desire for more plug-and-play systems, which can be retrofitted to already-existing craft and technology. In order to install the APKWS on a Warthog, all you have to do is remove the rocket's nose cone, attach the new guidance section, and screw the nose cone back on.