The Air Force Should Divest the A-10 Jet Aircraft, But Not For The Reasons It’s Proposing

Editor’s Note: This article originally appeared on the Council on Foreign Relations’ Defense in Depth blog on May 20. One... 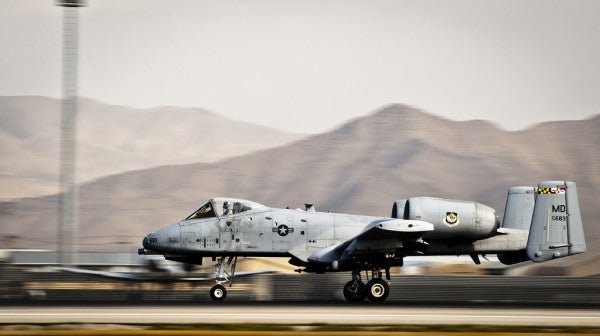 Editor’s Note: This article originally appeared on the Council on Foreign Relations’ Defense in Depth blog on May 20.

One of the most controversial proposals by the Air Force this year is its plan to divest the A-10 jet aircraft. The “Warthog,” as it is known, is a slow-moving, low-flying, ear-piercingly loud jet airplane built around a giant “Avenger” Gatling gun, which has provided intimidating firepower for troops in contact on the ground for nearly 40 years. By divesting an entire fleet, instead of just a few airplanes, the Air Force saves “billions, not millions” across the board in production and maintenance.

That $3.5 billion can then be invested in “multi-mission” aircraft, like the F-35, which like the F-16, F-15, B-1, and other platforms, can conduct close air support, in addition to their other missions. From an enterprise management perspective, they argue, it is just inefficient to maintain a “niche” airplane like the A-10, when so many other more survivable platforms can also do CAS, in addition to interdiction, air-to-air, and penetrating strike.

As a taxpayer, I get the Air Force’s budget argument, but as the wife of a former infantry officer who claims the A-10 has saved real lives in combat, my belief that the A-10 can probably be retired is not really about the money. It’s about my assessment that the Air Force can adequately perform the CAS mission without the A-10. The lingering question is, will it?

Soldiers in combat could not care less about the Air Force’s “enterprise-wide” analysis and the “efficiencies” gained by utilizing operationally oriented “multi-mission platforms.” Blah, blah, blah. What soldiers (and parents, spouses, and senators) want to know is that the firepower will be there when needed. Period. And here, the Air Force is just not getting that message across.

Truth is, the debate is not really about the A-10 — it is about the Air Force’s reputation and its perceived lack of dedication to the CAS mission. Divesting the one plane most visible to ground troops and perceived as the most optimized for CAS simply fuels the suspicion that the Air Force’s last priority is supporting the troops on the ground.

The Air Force’s own rhetoric about the need to “take risk” across the inventory, and the value of “multi-mission” aircraft, focuses on business, not war, and drowns out the solid facts about how CAS has been and will be conducted in the future. And it only adds fuel to the fire when the Air Force chief of staff, Gen. Mark A. Welsh III, says that various multi-mission platforms can do the mission “…maybe not as well, but reasonably well.” What, exactly, is “reasonably well?”

Consider a recent heated exchange between Sen. John McCain during testimony by the Welsh and the secretary of the Air Force. McCain was incredulous when told by Secretary Deborah James and Welsh that a variety of aircraft, including the high-altitude B-1 bomber, would be able to fill the gap in the CAS mission:

That’s a remarkable statement. That doesn’t comport with any experience I’ve ever had, nor anyone I know has ever had … You’re throwing in the B-1 bomber as a close air support weapon to replace the A-10. This is the reason why there is … such incredible skepticism here in the Congress.

When General Welsh broke in to provide some data, McCain cut him off saying, “General, please don’t insult my intelligence.”

Had the chief been allowed to elaborate, he might have focused, not on the business case, but on the following facts:

CAS is a mission, not an airplane. CAS really is a mission, not a particular airplane. It is not being replaced by the F-35 alone, its holistic mission is being carried out by all sorts of other planes, manned and unmanned. Changes in tactics, techniques and procedures, along with technological advances, have enabled an array of other platforms to conduct the vast majority of CAS over the last decade, and to do so with precision not available when the A-10 was designed in the early 1970s.

Eighty percent of CAS missions in Iraq and Afghanistan have been conducted not by the A-10, but by an array of other aircraft, including AC-130s, F-15Es, F-16s, MQ-1s, B-52s, and yes, the B-1. As for the B-1, it is not an insult to anyone’s intelligence to point out that 40% of the weapons tonnage dropped in Afghanistan came from the B-1, in over 10,000 CAS-oriented sorties — there is just no way the A-10 could have done this.

CAS looks different from the air. For troops on the ground, the thundering sound of an incoming jet means one of two things: relief or annihilation. Thanks to the fact that the Air Force maintains “air superiority” across the entire theater of battle, not just one company’s patch, U.S. and allied infantry welcome that otherwise terrifying noise. From the air, however, getting that firepower on target, and maintaining control of the skies, requires maintaining a technological edge over an increasingly sophisticated enemy.

The Air Force argues that the best way to protect troops on the ground is to take out the enemy before it even gets in contact with our forces. This means maintaining theater-wide air dominance with an array of platforms airborne across the battle space, and being able to swing within minutes from point to point. In this environment, the A-10 does not keep up. As one Air Force strategist explained, relying on only A-10 instead of these multi-mission platforms,

… actually increases risk to our soldiers by reducing the ability to kill the enemy before the Army closes with to destroy the enemy … the less enemy soldiers can actually look our American ground forces in the eye, the better we’ve done our job.

That said, the A-10 is most valued when the enemy does get through and airpower is needed in shorter range. But this reliance on the A-10 may be misplaced, as the Air Force claims that the Warthog has increasingly demonstrated limited capabilities compared to other platforms. Take, for instance, the case of the 2011 Mackay Trophy winners — Don Cornwell, Dylan Wells, Leigh Larkin, and Nicholas Tsougas, a flight of two F-15Es, call sign “Dude flight” — who responded in conditions unreachable by the A-10:

This aircrew represents a generation of pilots of various aircraft, besides the A-10, who have added CAS to their skill sets in the last decade. For the Air Force to convince skeptics that CAS is a priority as the A-10 comes out of the inventory, the mission will need to remain high on the list of required skill sets for which pilots are trained and that they practice regularly.

The A-10 is old. The A-10 was designed in a very different era, when as one Air Force pilot explained, “the only way to deliver precise fires and effects was strafing with a gun.” Indeed, the A-10 is often thought of as a flying Gatling gun. Today’s precision-guided systems allow F-15Es or B-1s to deliver an array of munitions in greater numbers and with accuracy “unimaginable” when the A-10 was designed. Finally, the Air Force argues that future ground fights will see increasingly sophisticated anti-aircraft surface-to-air threats, making the A-10 more vulnerable. Relying on this outdated jet in future fights places airmen and soldiers at greater risk.

These facts mean that even without the budget crunch, this old jet would be due for an upgrade. Even the most skeptical group of senators conceded in their recent letter of protest, “We do not believe the A-10 can serve in the inventory forever—it will eventually be replaced.”

The need for a joint CAS picture. Curiously, the Army has not formally objected to the Air Force’s divestment plan, nor has it asked Congress for funding to take over the A-10 system. Might this reflect an acknowledgment that, as the Air Force claims, the firepower has in fact been there when it was needed in Afghanistan and Iraq — either from an A-10 or from something else they perhaps did not even see?

As the primary “customer” of this Air Force mission, the Army’s voice is needed in the CAS debate. The Pentagon should conduct a joint Army-Air Force study of CAS, looking forward and back. They should look at the last ten years and get the facts of how well the air power has been delivered, from the air and the ground perspectives. They should also examine future CAS-oriented scenarios, from a joint perspective, to determine if losing the A-10 will create any “niche” gaps that cannot be covered by the rest of the inventory with existing or adapted TTPs. This holistic air-ground perspective will illuminate the nature of the risk, if any, being taken in divesting the A-10. It will also get Congress focused on the mission, not the plane.

Recent calls from Congress to delay A-10 divestment until a “capable replacement reaches full operational capability” miss the point of how this mission and the threat have changed and how technology has adapted. What Congress should be asking, in order to ease everyone’s minds, is how the Air Force intends to conduct the mission to the satisfaction of the Army with an array of 21st century platforms; not how it will replace, on a one-for-one basis, a plane originally intended to repel Soviet tank columns in the early 1970s.