UNSUNG HEROES: A Heartfelt Tribute To A Friend Killed 8 Years Ago In Iraq

What follows is a heartfelt letter to a fallen Marine, Lance Cpl. Randy L. Newman, originally written on the 8th... 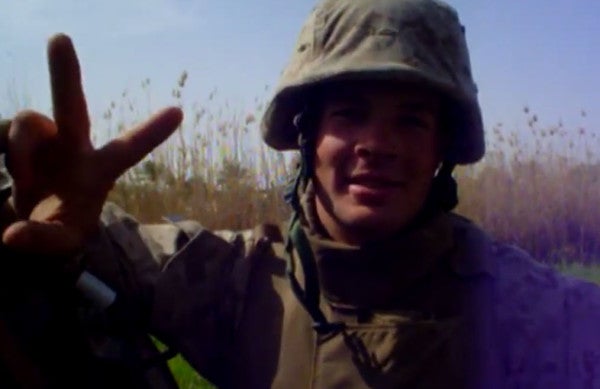 What follows is a heartfelt letter to a fallen Marine, Lance Cpl. Randy L. Newman, originally written on the 8th anniversary of his death, Aug. 20, 2014. Randy was killed Aug. 20, 2006, while conducting combat operations in Anbar province, Iraq. He was assigned to 3rd Light Armored Reconnaissance Battalion, 1st Marine Division out of Twentynine Palms, California. He was 21 years old.

The following thoughts are from Chad Russell, his friend and fellow Marine, who originally wrote them on Facebook. We are republishing them here with his permission.

It has been eight years, brother, since you went to be home with the Lord. Crazy how time flies by, my friend. When I got out and came home, I didn't have the smoothest reintegration process. Lot's of drinking and fighting and things like that. Just wasn't sure what do with my energy and time. I started going to school and I could barely stand it, so I jumped back out in the workforce and grinded it out working shift jobs until I ended up where I currently am.

Just celebrated my three-year wedding anniversary with my wife Taneal, which is wild. She is amazing, dude, you would love her — she has your sense of humor. No kids yet, but we're working on it Turned 30 this year, noticed gray in my hair and my beard. Man. I feel old.

Being a civilian makes you soft around the midsection a bit, as well. All these damn breweries in Bend, you wouldn't even recognize it. That and no one likes to get up early and do ruck runs up hills at 0600 after a night out drinking like we did weekly in the Marines. I know I need to punish my body a little more than I currently do, so I will continue to work on that because I know what kind of a physical fitness guru you were. Always you and Cody Larwin, man, just buffer than crap, made the rest of us look puny. I think it's a wrestling thing.

I work in Portland now, been with the same company almost three years, which is crazy, but it's been good. Pays the bills. I really want to do something with veterans, but I am not sure what that exactly looks like yet. It’s a work in progress, buddy. I will let you know when I get things nailed down. I sure do miss you, man.

It seems like yesterday I got the call from Kelly Rompel about what had happened to you. We just had got back from our deployment. My command let me go home to be with you and your family during that time, which I am grateful for. I remember our talk we had when I helped to guard your casket one of the evenings after I relieved the Marine on post that was at the funeral home. I still feel the same way about you, my friend. What I didn't realize coming out of the entire experience of your passing was that I never really grieved for my other friends. I lost to the war and didn't realize it would come down on me shortly after like a ton of bricks.

After I went through that process and spent time with your incredible family and friends who were grieving, I realized it the was the first time I had ever been to a Marine’s home and watched the family and friends grieve over a Marine fallen from the war. The family coming and going; the community coming and going; the Marine Corps coming and going; even Tommy Tucker's folks came by to offer their support. Then the thoughts of all of my buddies going through that with friends and their own families across the country hit me hard as anything I have ever been hit with in my life.

The realization that this kind of gathering was happening to my friends and families all across our great country was difficult to bear. It is hard to see outside of your own bubble, brother, when you are caught up in the one you are currently engrossed in. Your death helped me to start understanding what grief looked like and made me realize it was okay for me to start grieving over the other brothers we lost in the war.

You know how it was over there, Randy, I know you lost friends shortly before you were killed. You have little time to process the loss — do a little ceremony at the combat outpost, then your back on patrols that night. It doesn't leave much time to really go through any grieving process. It just is what it is and there's no getting around it. Those kinds of experiences made my heart very callused and bitter, buddy. It's taken me years to unwind some of that tension and every now and again I still feel it rising to the surface. As I am sure you can relate too.

The bottom line is that the turning point for me was when I stopped internalizing the pain and started the healing process with your friends and family by my side. You have a stellar group of friends and family, by the way, brother, which I know you already knew this, but I am telling you, man, some of the best people I have ever met were there during that time. I just want you to know that I am grateful for your sacrifice and your family’s love and compassion, brother.

I want you to know that I wear a bracelet with your name, date of birth, and the date you were killed in action on it most every day to remind myself that this world we briefly occupy is not about me, or I, or mine — it's about us. It's about us in our communities, being there for one another and protecting the values that you died for. It's about grace, mercy, and forgiveness, man, because as you know the world is a wicked and evil place. You wouldn't even believe me if I told you the evil going on overseas right now, buddy. Worse than anything I even saw in my time in the war. There has to be hope for a savior, otherwise, what the hell are we to put our faith in? Sure as hell not the government, or some worldly thing.

The only thing believe is big enough to deal with all of this shit is God/Jesus. It's about Jesus in the end man, I know you know that's because of how strong your faith in God was at the time of your passing. When I run into your family buddy they are doing so well, because they like you have some of the strongest faith in Jesus than any other Christians I have ever met in my life. They have more peace in their tone of voice than many people I have talked too that have never been through what they have been through with your passing. Only thing big enough to do that is God. Because I was bitter about your death for years after I started my own grieving process. The Lord helped through it.

I'm plugged into some counseling, and at first, I had the worst attitude about it, but it changed into a different and more open outlook. That was over four years ago and I am still going every other week or so. I get my ass out of bed and drive across Portland and sit and talk with a phenomenal guy whose dad was a Navy SEAL commander on Coronado. He doesn't judge me, he listens and offers suggestions and helps me think a little different about maybe how I am interpreting the world around me, offering me an objective view of situational awareness (Marine term there for you).

My honest-to-God opinion now, Randy, is that everyone needs counseling because we are all a little crazy, my friend, and it is nice to confirm you are not crazy when you go talk to someone else who offers you that objective opinion. Unfortunately, I see a lot of good men and women pass up on counseling because they are too focused on how others will judge. Our culture has it wrong on this. We need each other, just like Marines need their brothers. I am all for it, man.

I just think our brothers need to understand that when they come home, they need to be told by the Corps and by society that their skills and leadership experiences equip them to be successful in life, probably even more successful than those who never served.

Just some things that were on my mind I wanted to share with you.

I just want you to know that I am making a promise to you that I will never give up on the things that matter to the both of us most. Which is Jesus, our wives, our families, and our values / constitutional principles of our country, and our friends.

Even when it gets hard, if I get knocked down, I will pick my ass back up, return fire, and get in the fight. Man, you and I grew up in good old Bend, Oregon, in the 1990s and experienced a special time in history. Now we have to deal with what the future has for us here. I might never reach the expectations that I set for myself, but I am going to keep moving forward and keep improving — that is my pledge to you. And I will always make myself available to your family if they need my help.

Thanks for your ear, brother, I know you don't really have a choice in it, but I do appreciate you.

Love you man. Sure do miss you.