Editor’s Note: Excerpts of this article originally appeared at David Smith’s personal blog post, “Staring Down the Barrel of a... 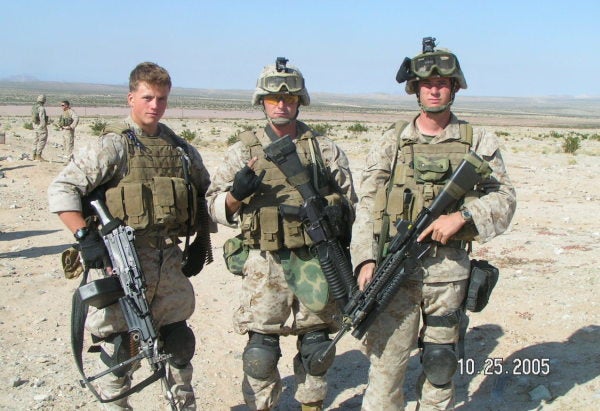 Editor’s Note: Excerpts of this article originally appeared at David Smith’s personal blog post, “Staring Down the Barrel of a Shotgun.”

I never thought I would be writing a blog about suicide prevention. To be quite honest, I was hesitant to write this because I don't want one specific dark spot of my life to define me. I am not depressed or angry like I used to be and I don't struggle with severe anxiety issues or post-traumatic stress much anymore. I am probably the happiest and most outgoing person you could ever meet. That, in fact, is actually the reason I agreed to write this. I hope it brings understanding and clarity to a very serious issue.

While I did struggle with some severe issues after returning home from combat, they were all exacerbated by alcohol and my lack of will to committedly seek the support, mental health care, and spiritual direction that I really needed in my life. I wish that I had noticed the dangerous road that I was headed down much earlier and I am convinced that if I had, my brush with suicide would have been completely avoidable.

Two years ago, I was drunk, standing in the living room of my college apartment, staring down the barrel of a shotgun. I just did not care anymore about anything. I felt detached, numb, and disassociated. I was completely emotionally shut down and beyond the point of caring enough to try and fix it. For a long time, I had fought against ideations of suicide, most often fueled by binge drinking and reckless behavior. I had gone to the Department of Veterans Affairs; I had talked to counselors; I had gone to therapy groups. These things helped, but it was like putting a bandaid on a gushing artery.

My drinking habit hit dangerous levels. I would do things like drink and then mountain bike as hard and as fast as I could down the roughest trails I could find, or drink a case of beer and then go surfing at night. I was intentionally trying to wreck myself and I had been doing it for a very long time. I was filled with guilt and anger for things that had happened in Iraq and afterwards. On top of that, I had developed a terrible view of women, society, and life in general. I knew what I was doing was wrong, but I still didn't stop or admit it. It was a vicious cycle and in order to protect myself from having to deal with the fact that I was being a shitty person, I decided to completely stop caring instead. There was a battle going on between the person I had become and the person I knew I was meant to be — it was tearing my life apart.

After a long weekend of camping and mountain biking fueled with thoughts of suicide, I drained every bottle of alcohol in the apartment before going into my room and opening up the shotgun case. I stared down the barrel and asked myself if I had the balls, and if I really cared enough to stop myself.

Before pulling the trigger, I thought about my best friend Clay, who had taken his own life almost exactly a year earlier. Clay had been a Scout sniper and we had chatted often about our experiences. My brain seemed to skip through all of the memories that we had shared together all at once and then I remembered how I felt when I learned that Clay had shot himself. I remembered crying for two or three days straight and I remembered the first time I met his family for the funeral in Texas. I remember the sadness, pain, and grief on the faces of his family members as we talked about Clay. I threw the gun down on the bed and yelled. Then I grabbed all the guns, threw them into my roommate's room, locked his door from the inside, and left the house.

I woke up the next morning to a phone full of texts and voicemails. My first reaction was to laugh as I listened to people so concerned for me. However, after about eight voice mails, the message started to sink in. I couldn't keep doing this. I realized that these people who I had tried to push away for the last few months were really concerned for me. Within the next week, I received five Bibles in the mail from friends and random strangers, and I took it as a hint from God that it was time to get my life back on track.

I finally started working to turn things around instead of making excuses. I stopped drinking. I started going to VA appointments and seeing veterans' counselors regularly and refused to miss appointments. I agreed to take prescription medications for anxiety, severe depression, concentration, and nightmares. My heart hurt every single day like it was literally going to explode out of my chest. The “I don't care about anything” attitude started to disappear and with it came a whole truckload of emotional hurt.

The upside was that I knew it was time to get back on my feet and face a challenge. I had the chance to kill myself and I didn't do it. That meant that I was at the bottom of my own hole, looking up, and I had finally thrown down the shovel.

That emotional pain lasted for months, but I started challenging myself in new ways and pushing myself more than ever before. I pulled straight A's at UC Berkeley my last three semesters. I spoke openly about my struggles with suicide and appeared on national news and media to talk about the stigmas surrounding post-traumatic stress. I lobbied Congress on mental health issues and was invited to a private meeting in the White House to talk about veteran suicide. I mountain biked for a weekend with former President George W. Bush and told him about my story. I deployed to the Philippines for typhoon relief efforts with Team Rubicon. Presently, I am on an 11-month Christian mission trip that is teaching me about opening up my heart, showing God's love, and serving others.

The bottom line is that if I had pulled that trigger two years ago, I never would have found out that my life had so much more to offer.