‘Let The Damn Army Clean Up The Mess’: An (Almost) Story Of Suicide

I don’t even know why I took the gun with me out to the garage. Since I had been home... 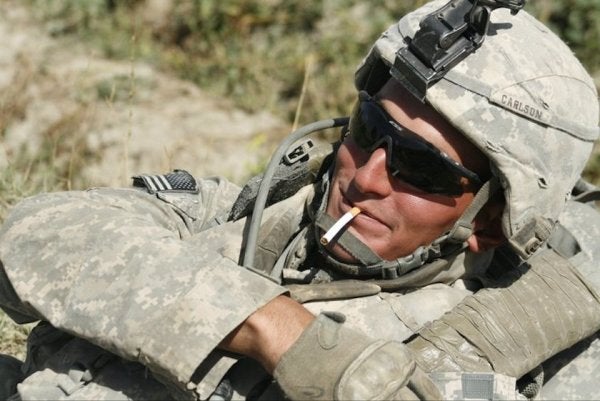 I don’t even know why I took the gun with me out to the garage. Since I had been home on leave, I carried the damn thing with me everywhere. For two weeks, it was never farther away than across the room or in my car, and even though I recognized how stupid and unnecessary it was, it made me feel better.

For at least an hour I paced in circles, slugging bourbon straight from the bottle and furiously chain smoking. I kept finding myself on the verge of tears, and I wasn’t even sure what I was crying about. In retrospect, that was perhaps the strangest part.

For all the darkness and misery I was feeling, it couldn’t be traced to any one event or series of events. My company had suffered badly during my second tour, and I mourned the loss of my friends as bitterly as anyone else. But unlike some of my compatriots, I was pretty philosophical about it. They were soldiers, and soldiers die. It was part of the job.

Related: The truth about 22 veteran suicides a day »

But a suffocating feeling of damnation, of utter hopelessness, kept creeping over me that I couldn’t shake off, and I couldn’t figure out why. Maybe it was a weight I didn’t even know I was carrying. The bender I had been on ever since I arrived home was doing nothing to help. A few nights before, I had gotten so drunk at a friend’s house I passed out face first on his back porch and cut my head.

After killing most of the bourbon, I sat down at a table in the garage and stuck the .45 in my mouth. I remember how the Rem-Oil tasted, and thinking about how quick it would be. The hollow-point bullet in the chamber would explosively blow out my brain stem and that would be that.

A lifelong agnostic, I had no real thoughts of heaven or hell, and I had always accepted the inevitability of my own death. It comes to everyone eventually, what did it matter if I sped it along? God knows I had accepted the probability of it in Afghanistan enough times.

I started to thumb the safety, and then a little voice said, “Are you fucking crazy? YOUR MOM IS IN THE NEXT ROOM!”

I had an image of her entering the garage and finding my brains blown out all over the cement floor and dropping dead of a heart attack right then and there. What kind of son would I be if I did that to her?

Better overseas, I reasoned. Let the damn Army clean up the mess. With any luck, the Taliban would do it for me, and I’d be a soldier heroically killed in battle rather than some fucked up suicide. I knew that there was nothing heroic about being blown to pieces by an improvised explosive device or bleeding out from a bullet wound, but it would be better for my family. “He died for his country,” they could say. Whatever that means.

I put the gun down, pounded the rest of the bottle, then passed out. Waking up later with a raging hangover, I felt little introspection over what I had nearly done. I simply put it out of my mind. A few days later, I flew back to Afghanistan and found out another of my platoon mates had been killed while I was gone.

It is easy to believe that with enough funding, counseling, and hotlines, the problem of veterans’ suicide could be abolished. Nothing could be further from the truth. Some people contemplate it for a long time, others will do it at the drop of a hat. There is no rhyme or reason to it.

Not long after returning from my first tour, I spent a weekend with several members of my company in Canada, including my closest friend in the Army. Just another episode of “Bravo Company, The Bender Continues.” After a dizzying few days of bar hopping across the beautiful city of Ottawa, we sobered up and headed back to post. My friend left separately, saying he had had a blast. I didn’t see him again until months later when I visited him in a mental hospital, smuggling a few logs of dip for him into the tobacco-free facility.

He had driven right past Fort Drum and continued south. He found a small-town police station, took a fake rifle out of his car, and walked in. After a futile effort to get the police to shoot him, who were so flabbergasted they essentially surrendered, he threw down the rifle and was arrested. He later told me about laughing hysterically after the police, trying to unload the rifle, unleashed a stream of profanity when all the airsoft pellets fell out and they realized they had been had.

This was a man whom I witnessed save many lives in combat as a medic, who despite me spending countless hours with him both overseas and back in garrison, never gave a clue of the pain he was feeling. I had heard every detail of his disastrous marriage, every mortifying tale of personal misjudgment, every hilarious, and occasionally nauseating anecdote about whoring around in shitty Army towns.

But the inner turmoil that was consuming him? Never a word. When I asked him later why he did it, he told me, “It seemed like a good idea at the time.” I never did get a straight answer, because he had none to give. But then again, years later in that garage, neither did I.

How did he go from the laughing guy with a twisted sense of humor partying hard in Ottawa to a suicidal wreck trying to get the police to kill him in a matter of hours? How did I go from hanging out watching TV with my sister to sticking a .45 in my mouth in my mother’s garage later that afternoon?

“It seemed like a good idea at the time.”

My friend’s brush with suicide was in 2007, mine in 2009, and neither of us ever tried again. Every now and then, I hear about someone from our old company who has passed on, and the line between whether or not it was suicide can be fuzzy. A man attached to our company, who served alongside us for 16 months during my first tour, was featured in a Vice documentary on pain medication addiction, and he later died of a heroin overdose.

The Clay Hunt Suicide Prevention for American Veterans Act passed unanimously in the House this week, and I hope the Senate passes it as well. It has common sense reforms with a minimal price tag, and maybe it will help some veterans fight their way out of whatever black hole is driving them to the brink. If it can stop even a few of the estimated 22 a day who kill themselves, then it’s money and effort well spent.

But for me and my friend, it was simply another scar carried back from war that tore itself open quicker than either of us could believe. I don’t know how you can fight something like that, and maybe you can’t. I just accept it as more casualties of war, ones that have been deferred.