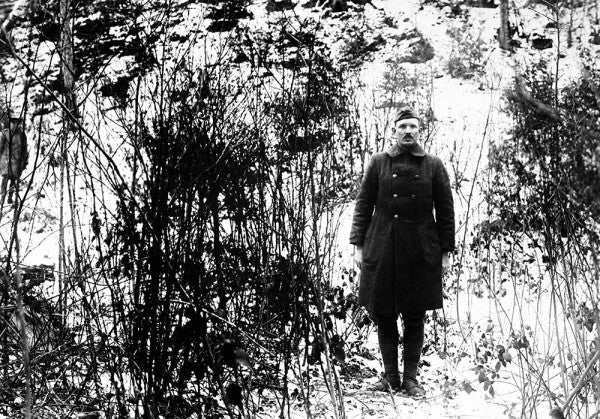 On Oct. 8, 1918, while serving on the Western Front, Army Cpl. Alvin C. York led a charge against a German machine-gun position during World War I, which resulted in 20 enemy casualties attributed to York alone, and the capture of 132 German soldiers.

He did it with just seven men.

York grew up near the Tennessee–Kentucky border, the third of 11 children in a family that subsisted on hunting and farming, making York a skilled marksman. When the United States entered World War I in 1917, York was drafted into the Army after being denied conscientious-objector status, which allows an individual to defer military service based on freedom of thought, conscience, or religion — he became a Christian fundamentalist two years earlier.

Serving in the 82nd Infantry Division, York arrived in France in May 1918 and served on the Western Front, where brutal trench warfare, gas attacks, artillery bombardments, and charges across contested no-man’s land led to more than 13 million casualties between the two sides.

It would also prove to be the decisive theater of World War I.

A German trench occupied by British Soldiers near the Albert-Bapaume road at Ovillers-la-Boisselle, July 1916 during the Battle of the Somme. The men are from A Company, 11th Battalion, The Cheshire Regiment.

In October 1918, York was part of the Meuse-Argonne offensive, which would become the final Allied push against Germany’s forces on the Western Front. A corporal at the time, York’s battalion was given the task of seizing German-held positions across a valley. Nine of the 17 soldiers in York’s unit were cut down by fire from a German machine-gun nest atop a hill as they attempted to sneak behind the enemy lines. The casualties included the small unit’s ranking officer, leaving York and seven others facing off against a larger force manning a well-defended position, and York and his men without the element of surprise.

Unable to maneuver to cover, York returned fire on the enemy, with one well-placed round after another. York stood exposed under a barrage of enemy fire; his only chance of survival was to silence the enemy’s 35 guns.

His actions that day are described in a diary he kept, which was used as the basis for the 1928 autobiography “Sergeant York: His Own Life Story and War Diary,” co-written by York and Thomas John Skeyhill, as well as a film based on his exploits called “Sergeant York,” starring Gary Cooper.

The tone of his writing and sentiment he conveys is one that likely resonates with many veterans, past and present. York’s words on war and combat are a mixture of enthusiastic excitement, tinged with regret over the act of killing, even to save oneself.

“[T]hose machine guns were spitting fire and cutting down the undergrowth all around me something awful,” reads an excerpt from York’s diary. “I didn’t have time to dodge behind a tree or dive into the brush, I didn’t even have time to kneel or lie down. … As soon as the machine guns opened fire on me, I began to exchange shots with them. In order to sight me or to swing their machine guns on me, the Germans had to show their heads above the trench, and every time I saw a head I just touched it off. All the time I kept yelling at them to come down. I didn’t want to kill any more than I had to. But it was they or I. And I was giving them the best I had.”

Following York’s lead, the remaining soldiers returned fire and as they maneuvered toward the enemy position, the German commander — who thought he was under attack by a much larger force — surrendered his garrison of roughly 90 men. On their way back to friendly lines, York and his squad took more prisoners, capturing a total of 132.

Though he consistently played down his actions, York was promoted to the rank of sergeant and on Dec. 31, 1919, received the Medal of Honor, the nation’s highest military commendation.

York’s actions that day have not gone uncontested, as detailed in a 2006 article by The New York Times. Two corporals, William Cutting and Bernard Early, who were both wounded in the battle, claimed that the story surrounding York began with an interview with a reporter for The Saturday Evening Post, George Patullo, who chose to focus his story on York. The article made York an instant celebrity, yet Cutting insisted that the German officer did not surrender to York, but to him.

Attempts to find the exact site of the battle have also muddied the waters around York’s description of events that day, with historians, supporters, and critics unable to pin down the exact site where the battle took place.

“The question is, what is really York and what is after-the-fact addition and what is plain fabrication?” said Michael Birdwell in an interview with The New York Times. At the time of the interview, Birdwell was a historian and curator of York's papers at the Alvin C. York Historic Site, who is part of a team searching for the exact location of the battle. “I personally dismiss much of the document.”

Birdwell and others have also questioned whether it was possible for York to single handedly take out 35 German machine guns.

Still, whether or not the exact details of the battle have been exaggerated does not detract from the heroism that York and his men displayed in the face of an overwhelming enemy.

During World War II, York attempted to re-enlist in the Army as an infantryman, but he was 54 years old, out of shape, nearly diabetic, and suffering from arthritis. His request to enlist was denied, but he was commissioned as a major in the Army Signal Corps, touring training camps and taking part in bond drives to raise funds for the war effort.

Even though York was a commissioned officer and a celebrity in his own right, in newspaper headlines, and in the eyes of those he met and inspired with his deeds, he remained “Sergeant York,” until he died on Sept. 2, 1964. A humble man without pretense, who fought to save himself and his men against incredible odds.