For Some Service Members, Insomnia May Not Be Part Of PTSD

Sleeplessness has historically been considered a secondary symptom of post-traumatic stress disorder, but recent research shows that insomnia may be... 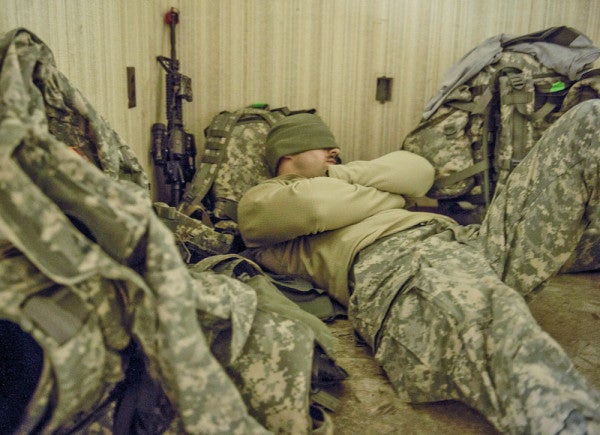 Sleeplessness has historically been considered a secondary symptom of post-traumatic stress disorder, but recent research shows that insomnia may be a disorder unto itself.

In 2014, an Army research team, led by Col. Vincent Mysliwiec, suggested the name “trauma-associated sleep disorder,” leading the service to propose it as a separate diagnosis from post-traumatic stress disorder.

He and the Army hope the name will add legitimacy to the diagnosis and lead to better treatment of insomnia among service members and veterans.

“We knew developed insomnia and sleep apnea, but we’ve never seen a truly unique sleep disorder related to a traumatic experience,” Mysliwiec told the Atlantic in a February 2015 article.

Trauma-associated sleep disorders, unlike post-traumatic stress disorder, include a grouping of particular nighttime symptoms such as screaming, thrashing, sleepwalking and nightmares, according to a paper published in the December 2014 issue of American Academy of Sleep Medicine’s Journal of Clinical Sleep Medicine.

The study suggested that sleep disturbances — including insomnia, nightmares, sleep disordered breathing, and periodic limb movement — are more complex than previously considered, and therefore should be treated separately.

In June, at a sleep conference in Seattle, Mysliwiec said, “Insomnia is the signature illness of military service.”

Insufficient sleep has been linked to a number of health issues including impaired cognition, cardiovascular disease, and poor overall health in the general population. But for veterans and service members suffering from trauma-associated sleep disorder, post-traumatic stress disorder, or traumatic brain injury, the effect of sleeplessness can be much more detrimental.

The researchers with Mysliwiec’s group noted that those suffering from the trauma-associated sleep disorder often act out their nightmares, yelling and fighting in their sleep, opening up opportunities for physical harm.

In addition, they reported to the Army that military spouses often resort to sleeping in separate rooms as they fear bodily injury from nighttime thrashing of their partners.

Although doctors are largely using prescription sleep aids to address insomnia in service members and veterans, treatments in behavioral interventions, such as cognitive-behavioral therapy and imagery rehearsal therapy, are beginning to pick up steam.

Jessica Dietch, a doctoral candidate at the University of North Texas, told Task & Purpose in an interview that these methods of treatment are effective, and “they offer a lot of benefits over medication.”

Over the course of typically six weeks, she said, patients practicing cognitive-behavioral therapy tend to see lasting change, adding, “with medication see a quick response, but if they stop using the medication the symptoms may return.”

The Department of Veterans Affairs has begun suggesting cognitive behavioral treatment for insomnia, and a lot of research is going into coming up with effecting treatment plans, according to Dietch.

However, the long-term effects of prescription medication are still up for debate, with some researchers suggesting it can be linked to later development of dementia.

Overall, reliance on sleep aids is something Dietch said, from a healthcare professional’s viewpoint, should be avoided regardless of the potential long-term effects.

“Training providers to be knowledgeable about insomnia and behavioral treatment options is a vital component to the treatment of chronic insomnia and managing its impact on other disorders,” said the authors of a 2013 report on deployment-related insomnia.

Similar to Dietch, the report calls for more research on methods to increase access to care.