There’s good news for an Army veteran in West Lafayette, Ohio, who’d been told his unique approach to treating his... 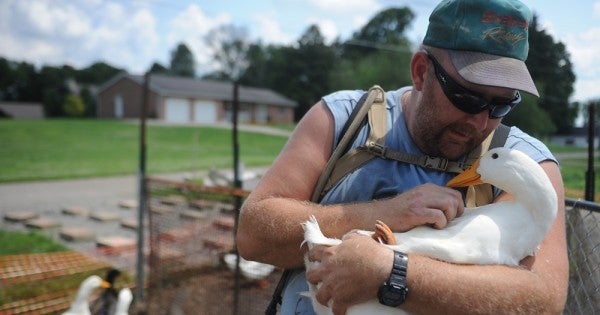 There’s good news for an Army veteran in West Lafayette, Ohio, who’d been told his unique approach to treating his post-traumatic stress disorder — a result of his 2005 military service in Iraq — by raising and caring for ducks just wouldn’t fly.

On July 18, Darin Welker appealed to the West Lafayette city council to keep his six therapy ducks, having afoul of a city ordinance barring farm animals back in 2014, which resulted in a misdemeanor conviction, according to the Coshocton Tribune. The city council granted the Army veteran a variance, which allows him to keep the animals.

Welker, who was medically discharged from the Ohio National Guard, argued that his ducks have been therapeutic, and he produced a letter from his doctor backing him up.

In a letter to the council, Welker’s physician Dr. Thomas Hanf (certainly no quack) said that “Welker had made great strides over the past five years on his physical pains, but the post-traumatic stress disorder from serving in Iraq in 2005 had been harder to deal with, and that the progress Welker had made with the ducks encouraged him,” writes the Tribune. Welker also provided seven signed letters from his neighbors stating they had no issue with the animals.

Related: The Incredible Bond Between A Group Of Combat Vets And Wild Wolves »

Welker says that in addition to helping him cope with post-traumatic stress, raising the ducks is a form of therapy for a back injury. He said in 2014 that although the Department of Veteran Affairs covered his back surgery in 2012, he didn’t receive mental or physical therapy, so he turned to his feathered friends for help.

“Taking care of them is both mental and physical therapy,” Welker told the Associated Press. “[Watching them] keeps you entertained for hours at a time.”