Most of us were so busy watching retired Marine Gen. James Mattis’ Senate confirmation hearing on Thursday that we completely... 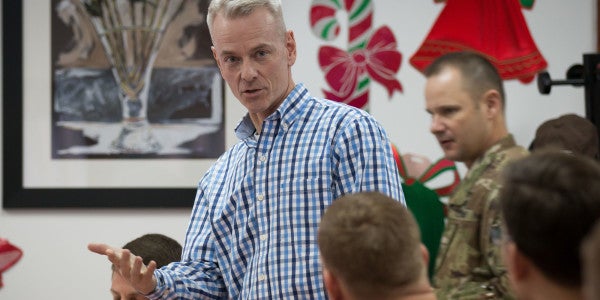 Most of us were so busy watching retired Marine Gen. James Mattis’ Senate confirmation hearing on Thursday that we completely missed the fireworks in the House. The Armed Services Committee hearing on the same day turned testy after Republican Rep. Steve Russell from Oklahoma delivered a ferocious arm-bar to Democratic representatives who voiced concerns over the appointment of Mattis as secretary of Defense. What did they have against the military, he wondered?

“We hear the bland words ‘civilian control of the military’ as if somehow those American citizens who bore the brunt of service in battle are somehow no longer entitled to their citizenship and are forever imprinted with some mark of Cain,” Russell declared.

At issue is the Defense Act of 1947, which stipulates that anyone taking the top job at Defense must first be out of uniform for 7 years (originally it was 10). So Mattis, who retired from the Marine Corps in 2013, needs a Congressional waiver, and given the reverence with which he’s viewed by members of both parties, he’ll almost certainly get it.

Moreover, many Democrats and quite a few Republicans expect Mattis to provide a sober counterweight to some of the incoming president’s foreign policy bluster. So why in hell are some House Democrats objecting to the waiver? Mostly because they’re furious that the Trump transition team decided at the last minute to prevent Mattis from testifying before their committee.

After all, why give them the satisfaction, when he’s a shoo-in?

Of course, Mattis did testify before the Senate Armed Services Committee on the same day, raising eyebrows by disagreeing with the president-elect on a number of pressing issues. Among other things, he offered support for Iran nuclear deal, the NATO alliance, and the ban on torture. But while most Democrats have been generally heartened by the appointment of Mattis — the Senate supported the waiver by a vote of 81–17 — the House committee was peeved at what they viewed as an insult to their chamber.

Or was there perhaps more to it? Russell insinuated that the high-minded focus on the doctrine of civilian control might actually be concealing something more sinister: a deep-seated prejudice against the men and women who have served their nation honorably in uniform. The retired lieutenant colonel and former Army Ranger, who led the Army’s 1st Battalion, 22nd Infantry in Iraq, mused that perhaps the Democrats were indulging a bias against the “warrior class.”

“What are their real objections?” he asked. “Do the objectors instead wish they could say, ‘We are afraid of the warrior class, we’re afraid they might cause a war?’ Is that it?”

He added that former generals were actually less likely to take the country to war. “The greatest sabre rattling often seems to occur from bloviating politicians that have never borne the sword,” he observed.

Democratic Rep. Seth Moulton from Massachusetts was not having it. The Marine veteran who served in Iraq under Mattis, came out strongly in support of confirming him back in early December, “before Trump changes his mind.”

While refraining from attacking his Republican colleague directly, Moulton took issue with one common concern about allowing a recently retired general become defense Secretary: that he might favor his own branch of the service. Not likely, he said. “As a Marine veteran myself,” he explained with a chuckle, “it’s hard to imagine a retired Marine general having any particular allegiance to the Marines. But perhaps…that’s because my own detox is going well.”

Unfortuntately, Moulton offered no insight whatsoever into why Mattis wears his flak jacket like this. Whatever. Mattis will be SecDef. It’s all good.