The United States is about to be treated to a total solar eclipse, and many active-duty soldiers across the country... 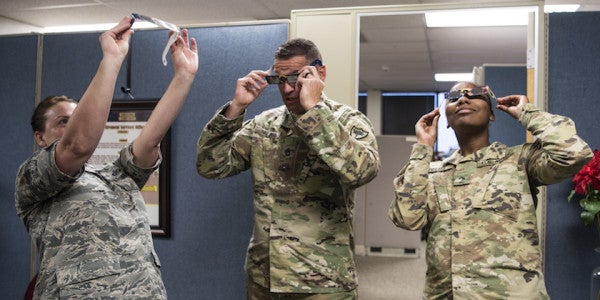 The United States is about to be treated to a total solar eclipse, and many active-duty soldiers across the country will have front row seats to the spectacle, while others will have to settle for a less magnificent but still pretty awesome partial eclipse.

Soldiers stationed in Army installations along the so-called “path of totality,” a 70-mile-wide corridor running diagonally down from the Pacific Northwest to the coast of South Carolina, will have a chance to see the sun completely vanish behind the moon at varying times throughout the day. Those stationed outside the corridor will only see the sun partially obscured.

The so-called Great American Eclipse marks the first time the moon will blot out the sun from coast to coast in nearly 100 years. The show begins in Oregon at 9:05 a.m. local time and will progress eastward through Idaho, Wyoming, Nebraska, Kansas, Missouri, Illinois, Kentucky, Tennessee, Georgia, North Carolina, and, finally, South Carolina. NASA has produced an interactive map of the eclipse’s trajectory, which you can seehere.

Fort Leavenworth, Kansas; Fort Leonard Wood, Missouri; Fort Campbell, Kentucky; and Fort Jackson, South Carolina are all situated within or very close to the path of totality, according to the Army, which means that each installation will be plunged into near or complete darkness for about two minutes today. The Army also says that “many other Army National Guard readiness centers and armories, as well as Army arsenals and depots, will also be able to experience the ‘total eclipse.’”

However, the spectacle lasts longer than the eclipse itself as the moon slowly creeps in front of the sun. For example, in New York City, which will experience a partial eclipse, the moon will start moving at 1:23 p.m. local time, blacken the sun at 2:44 p.m, and complete its journey by 4 p.m., The New York Times reports. Inclement weather could interfere with views in certain areas across the U.S., according to Newsweek.

Fort Campbell, which is located inside the path of totality, has scheduled a “day of non-specific activity” for soldiers stationed there so they can witness the once-in-a-lifetime event with friends and family. Meanwhile, the Army’s parachute team, the Golden Knights, will stage a parachute jump at Fort Jackson at the moment the moon blocks the sun.

Thousands of Army and Air Force National Guard members are also being activated in various states, including Oregon and South Carolina, to assist with eclipse-related traffic control, medevac, and firefighting, according to the Army.

The Army is urging caution for soldiers planning to gaze up at the sky today, as viewing a solar eclipse without proper eyewear can imperil your peepers. “This is extremely hazardous for the eyes,” Anastacio Dalde II, an employee of the U.S. Army Public Health Center at Aberdeen Proving Ground, Maryland, said in a statement.

There are two good options for people wanting to witness the spectacle without frying their eyeballs. One is to purchase and wear “eclipse viewing glasses.” The Army recommends shades stamped with International Organization for Standardization 12312-2 certification. Those unable to find such eyewear are still in luck. NASA has created this guide to building your very own “pinhole projector” using a cereal box (we prefer Lucky Charms), paper, tape, and aluminum foil, through which eyes can safely watch the eclipse.

For those who want to risk it, Dalde offers up this bit of sage advice:

“If you suspect you have experienced an eye injury due to viewing the eclipse, get an evaluation by an eye care professional as soon as possible. Symptoms might develop immediately or in a few days. The severity or type of symptoms may also change over time. The most common indications of possible injury are blurry vision and central blind spots. Color vision can also be affected.”