Amtrac Marines Are Getting Their Mine Clearance Launchers Back

Marine assault amphibian battalions are ready to hit the beach and clear out a crap ton of mines thanks to... 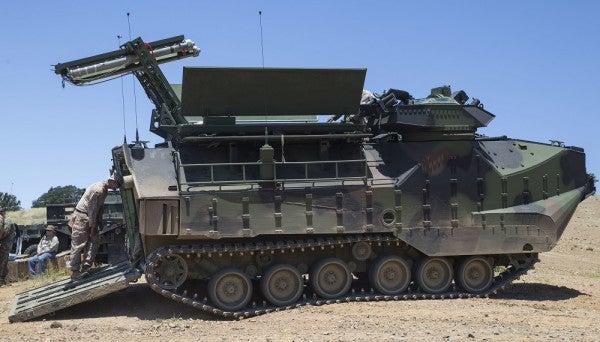 Marine assault amphibian battalions are ready to hit the beach and clear out a crap ton of mines thanks to an upgraded, and considerably safer, variant of the MK-154 Launcher Mine Clearance system.

Though the MK-154 mine clearance kit has seen service since the early 1980s, it was “deadlined” in 2013 amid safety concerns following the death of a Marine during a training event, Robert Davies, a safety official with Marine Corps Systems Command said an Aug. 21 statement.

“While certainly the last four years have been spent making the system more reliable and driving down the cost of maintenance, the big driver for the past four years was to ensure that we put out a system that was vastly safer,” Davies said.

A total of 47 systems are slated to be make their way back to assault amphibious vehicle, or amtrac, crews by the end of fiscal year 2018, although some Marines have already hit the range with the upgraded launcher, with 3rd Assault Amphibian Battalion running through a week-long course on the MK-154 Mod 1 at Marine Corps Base Camp Pendleton, California, in June.

When fully loaded, the launcher carries three rockets with three line charges, which spread out over an area after the rocket is fired, then explode in a wide path, clearing a track of mines and obstacles. When detonated, each rocket is able to clear a path 14 meters wide and 100 meters long, making it perfect for those times when you’re not sure if that beachhead is a great spot to even out that wrist-and-face tan or a deathtrap.

In the last four years, the launcher has been reengineered with a new hydraulic and electrical system that’s safer, more reliable, requires less upkeep. Prior to the upgrades, the MK-154 required expensive custom parts and assault amphibious vehicle crews would have to clear the air out of the hydraulic system, called “bleeding,” before it could be used.

“With the upgraded hydraulic system, the MK-154 can operate with air in the hydraulic lines and self-bleed any air out during operation of the system,” Capt. Anthony Molnar, the project officer for the MK-154 said in the statement. “This makes the new system more reliable and reduces time needed to prepare for missions.”

Other features include a backup power source, allowing the MK-154 to fire even if the AAV runs out of juice, and a new firing system lets Marines run through the firing sequence prior to loading live ordnance to make sure the circuity is safe and functioning properly.

“The benefit of this new test box and system is that if there is a misfire during the actual employment of the demolition charges, the AAV crewman knows there is an issue with the ordnance and not the MK-154,” Molnar said. “This allows them to troubleshoot faster and safely complete their missions.”

Which is good, because the last thing you want to have to do is get out of your amtrac and walk around to see if the thing that’s supposed to clear mines is working.