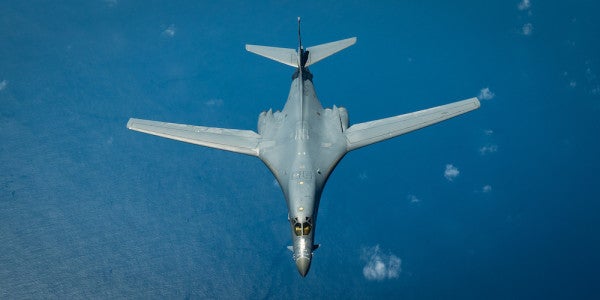 But thinking about future airmen who will have to deploy and put bombs on target, leaders are hoping the B-1B Lancer get a scheduled upgrade to its bomb racks.

The main reason? So it can carry more than it already does.

“We have the largest payload, we have the speed to get to where we need to get to, we have the loiter time to hang out once we're there,” said Lt. Col. Dominic “Beaver” Ross, director of operations for the 337th Test and Evaluations Squadron here at Dyess Air Force Base, Texas.

Military.com sat down with Ross during a trip to the base, and took a ride Tuesday in the B-1B over training ranges in New Mexico.

The aircraft's method of dropping bombs needs work, he said.

“We are getting what's called a BRU-56, an ejector rack and there's safety reasons for why we're getting it, but it gives us capability,” Ross said.

The long-range aircraft has three types of racks that it carries in each of its three bomb bays.

“Where that ejector rack mounts on that eight-carry launcher, it just bolts on there,” Ross said. “Our conventional rotary launcher … is what we carry our [GBU-31] 2,000-pound weapons with. It has eight stations on it.”

But “there was a failure rate on those ejector racks,” he said without elaboration.

When the aircraft was a nuclear platform, the BRU-56 was originally designed to carry nuclear weapons with 30-inch lug spacing, according to the program's solicitation posted on FedBizOps. But the mod calls for more variety in the ejector spacing.

The variation in ejector spacing is needed because GBU-38 500-pound weapons have tail kits “that are a little bit too long” for some of the carry-racks, Ross said.

Depending on whether the bombs are in the forward weapons, intermediate or rear AFT bay, there must be meticulous rearrangement so they can properly fit, he said.

The BRU-56 modification will expand the rack to carry eight 500-pound JDAMs in each bay, “so it will carry the same number the 2,000-pounders,” he said.

The upgrade may take awhile. The Air Force has only just started the bidding process, according to the FedBizOps post, which stipulates roughly three years time to design, develop and manufacture the upgrade.

Currently, the B-1 can carry 75,000 pounds — 5,000 pounds more than the B-52 Stratofortress — of both precision-guided and conventional bombs.