The Air Force recently launched a stealthy cruise missile from an external weapons pylon on the venerable bomber. 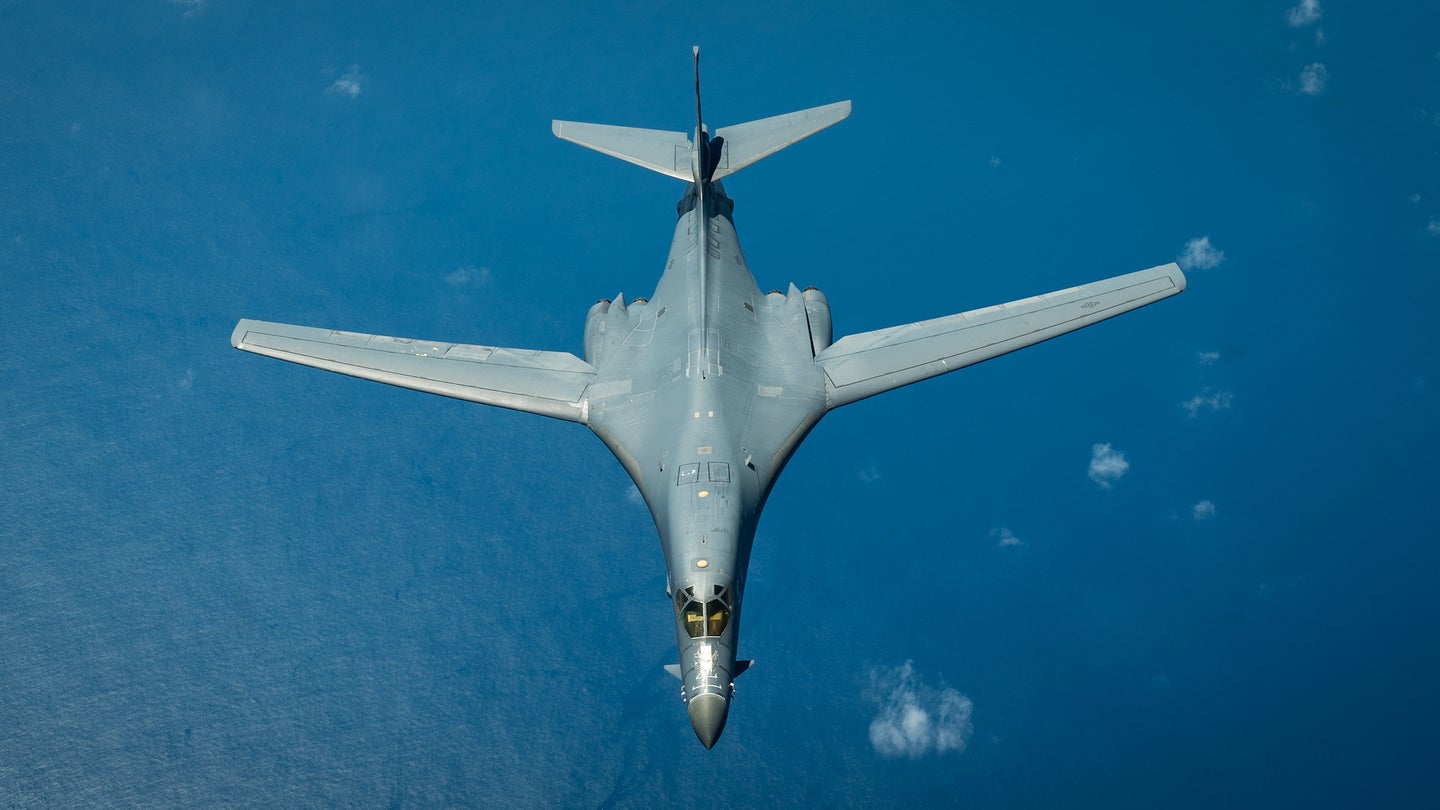 A U.S. Air Force B-1B Lancer assigned to the 37th Expeditionary Bomb Squadron, deployed from Ellsworth Air Force Base, S.D. to Andersen AFB, Guam, flies a training mission over the Pacific Ocean Aug. 16, 2017. During the mission two B-1s were joined by Japan Air Self-Defense Force F-15s in the vicinity of the Sankaku Islands. These training flights with Japan demonstrate the solidarity and resolve we share with our allies to preserve peace and security in the Indo-Asia-Pacific. (U.S. Air Force photo/Staff Sgt. Joshua Smoot).
SHARE

The Air Force recently launched a stealthy cruise missile from an external weapons pylon on the venerable B-1B Lancer, a major development in the service’s quest to slap hypersonic weapons on the non-nuclear bomber — and scare the bejesus out of America’s adversaries.

The service announced on Thursday that a Lancer assigned to the 412th Test Wing’s 419th Flight Test Squadron successfully fired an inert air-launched AGM-158 Joint Air-to-Surface Standoff Missile (JASSM) from an external weapons pylon mounted on its fuselage during a Dec. 4 test at Holloman Air Force Base in New Mexico.

The test came just weeks after a Lancer carried a JASSM under an external pylon for the first time during a Nov. 20 test at Edwards Air Force Base in California.

“Demonstration of B-1B external carriage reflects the potential to keep weapon systems in the fight with increased combat capability.”

The B-1B can also currently carry the Long Range Anti-Ship Missile (LRASM), the Navy’s new semi-autonomous ship-killer missile that achieved early operational capability on the bomber back in August 2018, according to Military.com.

The two tests are a proof of concept for the bomber’s ability “to carry 24 JASSMs [and or] LRASMs internally with 6 to 12 weapons externally,” as Lt. Col David Faggard, spokesman for Air Force Global Strike Command, previously said in November, an increase that would allow two bombers to carry three aircrafts’ worth of weapons.

The latest cruise missile tests come amid both a planned reduction in the Air Force’s B-1B fleet of 17 aging airframes and plans for a “limited” number of bombers to play an increased role as “the roving linebacker” of U.S. military power projection in the western Pacific and North Atlantic, as Ray has previously said.

Video: A look at the B-1B Lancer

But the long-term goal of the external carry tests isn’t simply more weapons for the B-1B’s arsenal — it’s to carry better, more lethal weapons of a hypersonic variety.

Indeed, Ray had previously detailed plans for the command to refurbish some existing bombers with external pylons explicitly to haul hypersonic weapons like the AGM-183 Air-launched Rapid Response Weapon (ARRW).

The ARRW, currently undergoing rapid development following an August 2018 contract award to Lockheed Martin, uses a rocket booster to deliver an unpowered glide vehicle into the Earth’s atmosphere, per the War Zone. A warhead that then descends onto a target on an unpredictable flight path and at speeds of up to Mach 5.

“My goal would be to bring on at least a squadron’s worth of airplanes modified with external pylons on the B-1, to carry the ARRW hypersonic cruise missile,” Ray told Air Force magazine back in April. “There are several versions that we could contemplate, but we believe the easiest, fastest, and probably most effective in the short term will be to go with the external pylons.”

The goal of the Lancer upgrade, Ray reportedly said during a phone call hosted by the Defense Writers Group following his conversation with Air Force magazine, is to enable the B-1B to carry at least six ARRW hypersonic missiles while leaving the aircraft’s bomb bay open to haul conventional missiles like the Joint Air to Surface Stand-Off Missiles-Extended Range (JASSM-ER) and LRASM munitions.

The United States is currently in the middle of a hypersonic arms race against ‘great power’ competitors Russia and China. Russia has conducted tests of both its 3M22 Zircon (Tsirkon) and Kh-47M2 Kinzhal (Dagger) hypersonic missiles this year, while China flaunted its DF-17 hypersonic glide vehicle during a military parade last October.

AFGSC and the 412th Test Wing had previously showcased both long bay and external carriage options that would allow the Lancer to haul ” larger, heavier munitions, such as hypersonic weapons,” according to a release from Edwards AFB.

Related: Watch the Air Force use a hypersonic bullet to blast a drone out of the sky