The US Tradition Of Civilian Control Of The Military Started Here 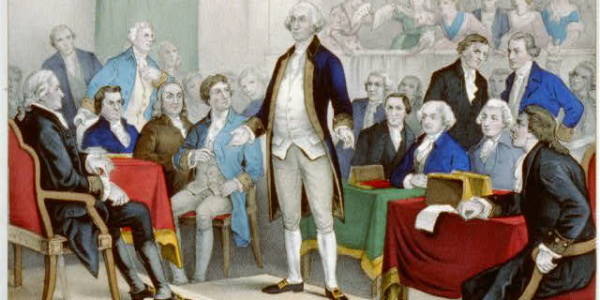 A retired Army lieutenant general once said to me that there is no Constitutional provision for civilian control of the military, except in that the president, a civilian, is the commander-in-chief.

So where does civilian control come from? Is it more custom than anything else? And is it just the executive’s right?

If so, is Congress just butting in by controlling the money the military gets?

No, in fact. I noticed this the other day whilst doing some research. Congressional control of the military was explicitly part of the creation of the U.S. Army. On June 15, 1775, the 2nd Continental Congress chose George Washington to command the new Army. The next day he accepted.

The day after that, June 17, the Congress drafted his commission. That document states, in part, his obligation “punctually to observe such orders and directions, from time to time, as you shall receive from this, or a future Congress of these United Colonies, or a committee of the Congress.”

In other words, formal, explicit civilian control of the military not only predates the Constitution, it predates by more than a year the Declaration of Independence, and began with the selection of the first soldier in the Army. (I can’t believe I didn’t know this.)

On reflection, I think Washington may have been the most Clausewitzian of all American generals. Yes, before he was a president, he was a general. But before he was a general, he was a minor politician for 15 years, first in the Virginia House of Burgesses and then as a delegate to the 1st and 2nd Continental Congresses. He understood in his bones the nexus between politics and military operations.