Vetsplaining: How Not To Talk To Civilians About Military Life

Vetsplaining (noun): The act of a veteran (or veterans) or active military member explaining nuanced and exclusive military issues to... 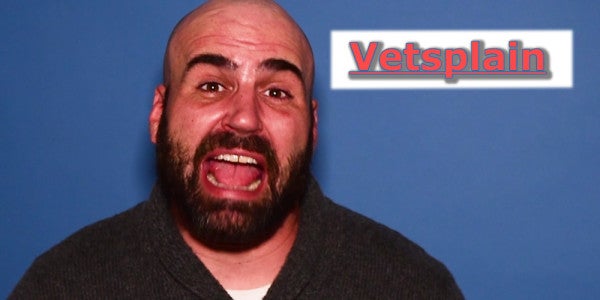 Vetsplaining (noun): The act of a veteran (or veterans) or active military member explaining nuanced and exclusive military issues to a civilian in a condescending, aggressive, or patronizing manner.

There's a ridiculous trend of “angry veterans” shaming the general public for completely forgivable misconceptions about military life. You don't have to be a bastard about things when you're talking to people who shouldn't be expected to know everything you know about military culture and customs. Hell, even people in the military mess up culture and customs stuff all the time.

But more importantly, you're not educating civilians when you talk down to them: You are, in fact, making veterans look like blowhard simpletons who lack basic social skills. Perhaps that's why transitioning service members generally have a hard time reintegrating: too many ornery blue falcons have already paved the way in giving the public a nasty taste in their mouth about veterans.

Consider this: When you ask a medical professional for advice on your horrible back rash, they don't get all huffy and start ranting about their time in medical school. They don't dismiss your question; they use all that time they spent learning every single disgusting detail about dermatology to distill their knowledge to you in a way that makes you a better person. And unlike you, they never had an intensive military culture course where knowledge was beaten into your head at boot camp by a very angry man or woman who wore a large hat.

There's an easy solution to this problem: the next time a civilian says or asks something that's not accurate, either ignore it or politely educate them. Boom: Problem solved. Or better yet, go overboard and explain why the cheese tortellini MRE is the best MRE.

But afterward, be sure to film an angry selfie rant on your cell phone in the back of your Toyota Camry. That's definitely the best way to address the civil-military divide.