Tear open any MRE and you’ll find a vacuumed-sealed meal, utensils, coffee, gum, salt, pepper, and sugar. But the holy... 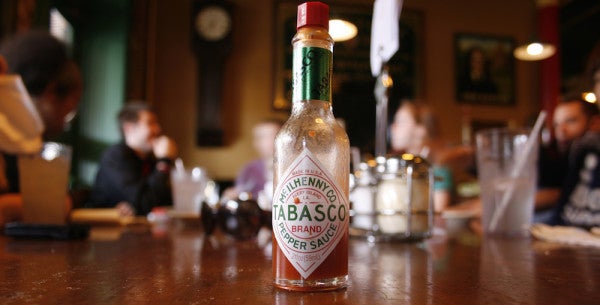 Tear open any MRE and you’ll find a vacuumed-sealed meal, utensils, coffee, gum, salt, pepper, and sugar. But the holy grail — the thing that truly ties the processed food together and makes guzzling down that packaged, bland cuisine bearable — is that little packet of red hot fury: Tabasco.

But how did the ubiquitous hot sauce become the savior of the MRE and, in turn, the American GI? Surprisingly, Tabasco traces it roots all the way back to the Civil War.

Forced to flee New Orleans in 1863, Confederate banker Edmund McIlhenny moved to his in-laws plantation on Avery Island in Louisiana in 1868, where he planted seeds of the pleasantly spicy Capsicum frutescens peppers. A year later, he distributed 658 bottles of his sauce — called “Tabasco” after the Mexican Indian word meaning either “place where the soil is humid” or “place of the coral or oyster shell” according to the product’s history — around New Orleans and the Gulf Coast, charging a dollar for each. In 1870, he patented Tabasco.

The recipe varied over the years as Tabasco became a mainstay in the region, but it wasn’t until McIlhenny’s great-grandson Walter became CEO of the family business in 1949 that the fiery sauce would formally make its way into the hands of American GIs. The younger McIlhenny joined the Virginia National Guard in 1931 and transferred to the Marine Corps in 1935, fighting in the Pacific during World War II and attaining the rank of brigadier general in the reserves by the time he finished his military career in 1959 — and it was his experience with the bland food contained in the C-ration in the field during World War II that put Tabasco on the military’s map.

When he took control of the McIlhenny Company, Walter began exploring ways to create a ration-sized Tabasco bottle, and in 1966, he finally found a way to unofficially break into the military market: The company put out a pocket C-ration cookbook called No Food Is Too Good for the Man Up Front, perfect for the standard American GI kit — and with it, the popular two-ounce bottle of Tabasco was born, wrapped neatly within the cookbook itself.

The jar, swaddled in special waterproof camouflage packaging was perfectly sized to be sent to soldiers in Vietnam, as ads suggested, for just a dollar. “For your man overseas,” reads one promotion in a 1967 issue of the Pittsburgh Press.

Tabasco proved essential for troops on long deployments overseas, from Vietnam to Afghanistan, helping them cope with intolerable rations — and, in turn, boosting morale.

“There’s no better way to enhance the taste bud feedback of military rations than with hot sauce,” wrote Army veteran Scott Gourley in 2014 on the armed forces’ penchant for the spicy stuff. “In fact, it has become a critical accompaniment to a broad range of military rations.”

Even the Army brass took notice. When the C-ration was eventually replaced by the Meal, Combat, Individual ration in 1958, the cuisine hardly changed in terms of flavor and variety — and Tabasco remained a staple for service members hoping to overcome the blandness of the food for decades after.

“Your product has always been in demand by troops in the field,” wrote legendary Army Gen. Norman Schwarzkopf in a 1991 letter to the McIlhenny Company. “I have enjoyed spicing up my own rations with your pepper sauce for many years.”

The modern-day MRE was introduced in 1983, and nine years later, the Department of Defense finally made the decision to include 1/8 ounce glass bottles of Tabasco as part of the kit.

“Tabasco has a very humanistic appeal with the war fighter,” Jeremy Whitsitt, who works with the DOD Combat Feeding Program at Natick Research Development Centertold Epicurious. “The one comment we always get is, whatever you change or take out, don't ever take out our Tabasco sauce.”

Now, MREs are equipped with ketchup-esque packets of hot sauce, but you can be sure that regardless of the packaging, one of the best parts of the MRE is the Tabasco. Because without it, your chili-mac is basically just, chilly macaroni…