How The US Military Got Hooked On Rip Its

U.S. Army Ranger Shane Snell held the chunky aluminum can in his hand and took a deep breath. In the... 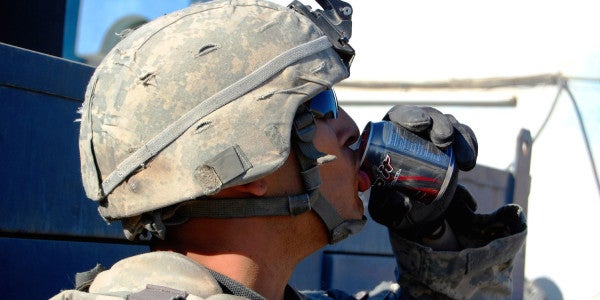 U.S. Army Ranger Shane Snell held the chunky aluminum can in his hand and took a deep breath. In the course of 30 minutes, he had downed five 8-ounce servings of Rip It, a military-approved energy drink that was infamous for causing a variety of unpleasant side effects when consumed in excess. This would be can number six. It took him 10 minutes to finish it.

In the boredom arising out of a cool night in Ramadi, Iraq, this was a “Case Race,” or an attempt to down as many of the cans in a 24-pack as he and his squadron possibly could. When no one was interested, he and a friend took it upon themselves. By the time he slammed down a seventh, his sergeant burst in and told him to get moving.

“I knew this had been a bad idea,” Snell recalls.

After 20 minutes had passed, Snell started sweating profusely. Riding in a convoy and fully geared up, the mixture of caffeine, taurine, sugar and other additives were swimming around in his intestines, undulating like the mixture inside a convenience store slush machine. He farted with such potency the vehicle’s driver started to dry heave. Forcing him to pull over, Snell ran out and crouched over before he soiled his many layers of fatigues. His body hummed with a restless energy. Snell says it was “like my skin was crawling.”

Related: How a local energy drink became an icon of the Iraq War »

Such are the excesses of a military life powered by Rip It. While the multi-flavored refreshment has a rather minimal stateside profile, lost among the Red Bulls and Monsters that secure prime refrigerator shelf space, it is can be found almost anywhere a soldier goes in the Middle East. It’s as common as an MRE and Snell estimates at least 99% of enlisted men and women have tried it, with some growing so attached they’re more concerned with how many cans are left than the quality of actual food.

“It’s everywhere,” he says by way of explanation, “and it’s free.”

The National Beverage Corporation was founded in Fort Lauderdale, Florida, in 1985 on the strength of CEO Nick Caporella’s acquisition of Shasta and Faygo, second-tier beverage brands that had multiple bottling facilities across the country. Diversity — selling everything from sparkling water to root beers — allowed National to find a place among the top 10 soft drink companies.

In the early 2000s, National got into the burgeoning energy drink field with Rip It, a low-cost alternative to the premium Red Bulls and Monsters of the industry. Priced at roughly $1 a can in discount retail outlets, Rip It uses 25 grams of sugar to shuttle roughly 100 milligrams of caffeine and the caffeine-infused guarana seed extract into the bloodstream for a cheap, easy fix. (The 16-ounce serving doubles that.)

In 2004, the company had reached an agreement with defense contractors to offer the cans downrange in Iraq and Afghanistan following the war on terror outbreak. Though the terms of the deal are unknown — National Beverage did not respond to multiple requests for comment — the arrangement made the brand easily accessible to soldiers seeking a boost for long hours on duty, or when drowsiness could prove fatal.

“You need to keep awake somehow,” says Tim Hsia, an infantry officer who served for six years and observed Rip Its being hoarded from chow halls like gold bricks. “It’s paramount to survival, not only for yourself, but for your peers.” More so than food, he believed his fellow soldiers perceived Rip Its as “mission essential.”

Hsia didn’t drink the stuff himself. “I’m more of a sunflower seed guy,” he says, preferring the act of chewing over caffeine or stimulants. But when he was a logistics officer in charge of rationing food products, he said he’d heard it if he somehow didn’t portion it out properly.

“People would count ammo, how many bottles of water and how many Rip Its they got,” he says.

Some soldiers walked bowlegged out of chow halls, cargo packs stuffed with the cans. They were preparing for a convoy and shifts that could last anywhere from 36 to 48 hours with only minimal time for naps. “If they were going away for a few days, or a week, they wanted it with them.”

While older veterans might opt for coffee, younger soldiers are of an energy drink generation and took to Rip Its as a kind of brand comfort in otherwise unfamiliar territory. “It’s got a funny name,” Hsia says, “and they identify with it.”

Some sergeants might limit the number of cans per soldier to just two a day, although it wouldn’t be uncommon for someone to ingest five or six spread throughout a shift. Those with an extreme tolerance might down as many as 18, creating the kind of hyper vigilance found in cartoons. One soldier told National Public Radio that it was Rip Its and tobacco that kept him up late into the night while on patrol. “Patriotism,” the company ad slogan reads. “…If only we could bottle it!”

Ater 11 deployments in 13 years, Snell developed a pretty good eye for the wide variety of Rip Its’ gastrointestinal casualties and their corresponding flavors. The drink comes in everything from citrus to sugar-free, and each seems to use its blend of caffeine and pick-me-up herbal ingredients to provoke a different response. Many soldiers just feel awake and alert; others suffer from what Snell refers to as “man-strual cramps,” a clenching of the guts that struggles to keep up with the influx of stimulating liquid.

“I knew a guy who, if he drank the citrus flavor, would get diarrhea within minutes,” he says. “Another one made his teeth hurt.” Others can pour three or four cans over ice and “just smash it. Nothing happens.”

Steven Whiting, Ph.D., director at the Institute of Nutritional Science, worries that consumption of diuretics in high-temperature environments might be ill-advised.

“They’re already perspiring profusely, and now they’re forcing more fluids through the kidneys,” he says, leading to a possible electrolyte imbalance. Sustained use of caffeine, he says, can cause sleeplessness and anxiety issues, as well as irregular heartbeats in susceptible individuals.

Monster Energy is currently facing a series of lawsuits over people who consumed the drink — though often to excess — and claim they subsequently suffered kidney or cardiac problems.

Snell, however, believes soldiers are probably more qualified to address possible hydration issues than anyone, since protocol for managing fluids is covered extensively during training. Rip Its and other energy drinks, he says, are avoided if soldiers know a lot of physical exertion like hiking or carrying equipment will be required.

“Your core temperature is already spiking, so we don’t need to add to it,” he says.

Stateside, Rip It keeps connected to servicemen and women via support on social media, while hashtags like #teamnosleep try and appeal to cramming students, all-night gamers, and law enforcement.

Having recently finished a cross-country move, Snell happened to come across a Rip It display while stopping at a convenience store.

“I got one,” he says, “but couldn’t bring myself to drink it until I got home. Just in case.”

Editor’s Note: This article by Jake Rossen originally appeared on Van Winkle’s, a new website dedicated to exploring how sleep affects and informs our lives.

This article was published on Van Winkle’s.