The Army grounds its fleet of CH-47 Chinooks, one of its oldest and most versatile aircraft 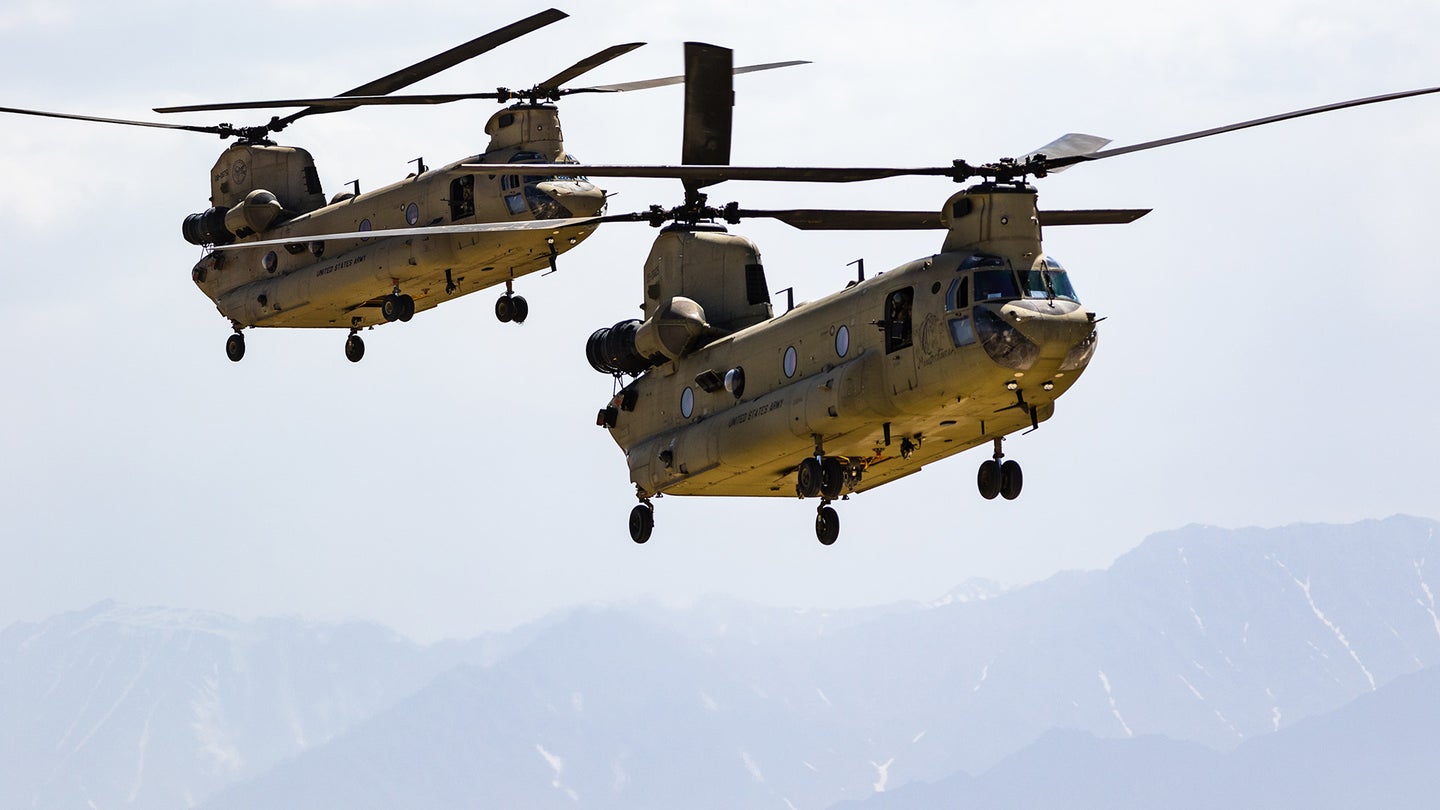 There are show horses and there are workhorses, and the Army’s CH-47 Chinook helicopter is definitely a workhorse.

For more than 50 years, Chinooks have served as the Army’s heavy lift helicopter, ferrying troops and equipment around the world. Made by the Boeing Company, the CH-47s have been upgraded over the years and are expected to remain in service with the Army through the 2060s.

The Army grounded its entire fleet of CH-47s “out of an abundance of caution” after identifying the cause of fuel leaks that led to fires aboard some Chinooks, Army spokeswoman Cynthia Smith told Task & Purpose on Wednesday. No soldiers have been injured or killed by these fires.

“Based on the results of our investigation some aircraft may not require corrective measures and may soon return to normal flight operations,” Smith said in a statement.

Honeywell International, which builds engines for the Chinooks, said in a statement that a type of gasket known as “O-rings” that did not meet the company’s design specifications had been installed in some Chinook engines during maintenance at an Army depot.

“It is believed these suspect O-Rings have been identified and isolated,” the Honeywell statement says.

Until the issue is resolved, Army aviation will have to make do without a significant amount of its muscle. The powerful helicopters are able to reach altitudes greater than 18,000 feet, so Chinooks were often used to ferry troops and life-saving equipment to mountain tops in Afghanistan. In fact, it was an MH-47E Chinook that transported the first U.S. special operators to Afghanistan on Oct. 19, 2001, just 39 days after the Sept. 11, 2001 terrorist attacks.

Since first seeing combat in Vietnam in 1965, the Chinook has gained a reputation as a tough helicopter. In June, the crew of one CH-47 received the “Broken Wing” award for being able to land a stricken Chinook two years earlier in Afghanistan, even though the helicopter’s rotor blades had “sustained severe catastrophic damage.”

While Chinooks are rugged helicopters, they also have their quirks. The first time this reporter flew in a CH-47, he was advised not to worry if he saw fluids leaking from hoses – actually it would be more worrisome if the Chinook stopped leaking because that would indicate it was out of hydraulic fluid.

Still, many service members have been amazed by how powerful and maneuverable Chinooks can be. Patrick Kinser, who served in Afghanistan with the Marines, told Smithsonian Magazine about one time when a Chinook carried his platoon to a village near the Pakistani border that was about 9,000 feet above sea level.

“When I stepped off the ramp onto the ground I heard, ‘That’s the coolest thing I’ve ever seen!’—one of the Marines was yelling over the screaming of the engines,” Kinser told the magazine. “I looked up to see that the Chinook’s front wheels were a good 20 feet above the steep mountainside, and its rear ramp was just a few inches off of it. But the pilots and crew kept it dead-still, as if it were sitting on flat earth. The crew on the back were just so nonchalant and dead-calm as they helped us offload all our food and water. Then the beast spun up and roared away.”

The fact that these Marines gave props to the Army is a tribute to how beloved CH-47 Chinooks really are.