It’s not every day a crew is awarded for crashing well. 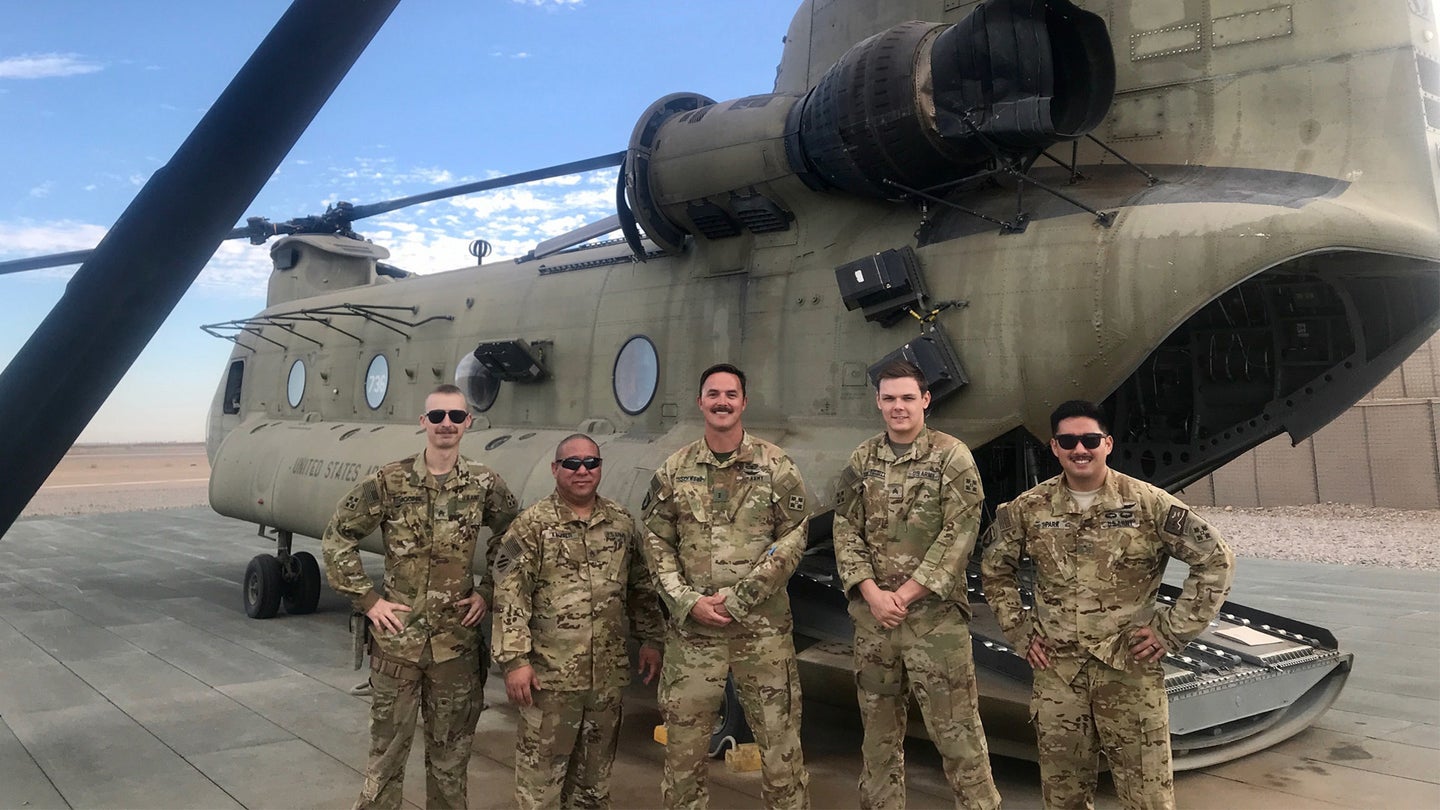 Army helicopter crews don’t often get commended for crashing well, but one crew’s handling of a “catastrophic” situation in Afghanistan in 2020 earned them exactly that with a rare presentation of the service’s “broken wing” award.

“This is an especially rare honor as historically the award is usually given just to the pilots,” according to an Army news release, which noted the honor was given to every member of the crew: Chief Warrant Officer 3 Ryan Schwend, Chief Warrant Officer 2 Eugene Park, Sgt. Andrew Donley-Russell, Sgt. Ty Higgins, and Staff Sgt. Ben Kamalii. As We Are The Mighty described it, the Broken Wing Award is given to aviators “who expertly crash,” and that’s precisely what happened on the evening of Nov. 20, 2020.

Schwend and his soldiers with Bravo Company, 1st Battalion, 168th General Support Aviation were flying a “routine mission” in southern Afghanistan that evening. As the U.S. was in the midst of a drawdown in the country, the crew was tasked with helping consolidate bases and living spaces by moving relocatable buildings from Kandahar to a temporary location called Dwyer under cover of darkness, flying the aircraft using night vision goggles and low illumination.

The crew had been flying for almost seven hours and were just passing over Helmand Valley at a thousand feet with the second pair of housing units when Schwend heard a “thunderous bang” that was “louder than anything I have ever heard in a Chinook,” he said.

The Chinook “immediately jolted into a right bank,” the release explained, throwing everyone into motion to take back control of the aircraft and determine what had happened. Higgins released the load they were carrying as Park “promptly stabilized the aircraft.” He could see that it was under “immense strain,” but he and Schwend were able to maintain control of the aircraft as they approached Dwyer.

Schwend radioed ahead to the lead Chinook and told them to get out of their way, while Parker radioed to the tower asking for a ground response team to “immediately dispatch to help with their situation.” Meanwhile, the rest of the crew members in the back of the aircraft ran through a cargo hook release emergency checklist trying to find out what happened.

The soldiers eventually realized that the cargo the Chinook had been carrying wasn’t completely released, and was instead “pinned to the bottom of the aircraft in a mangled mess.” A wall of the portable housing unit collapsed, according to a final report of the incident, allowing “air to enter into and push the load horizontally to the left and upward making impact” with the Chinook. The crew didn’t know it at the time, but the cargo had also hit the back rotor system causing “unseen damage to the blades.”

The crew determined that because the cargo was pinned to the bottom of the aircraft, the landing would have caused a rollover and “further damage or possible fatalities.” Instead, Schwend struggled to keep the aircraft hovering while the ground response team worked to dislodge the wreckage from the bottom of the helicopter. After “several attempts,” they were finally successful and were able to cut the cargo so the crew could land.

As the rotors finally began slowing down, the release says Higgins saw that the blades “were beginning to sag.” He realized that during the incident earlier, the rotor blades “sustained severe catastrophic damage” and were ultimately being “held straight out by the centrifugal force” as they spun. But as they started slowing when the helicopter was shut down, the blades “began to sag before finally impacting the airframe causing further damage” and coming to an abrupt stop.

It wasn’t until over a year later, however, that the crew received the Broken Wing Award on June 18, 2022. Established in 1968, the award is given to individuals who minimize damage to personnel or aircraft during an emergency through “outstanding airmanship,” according to Army regulations. Additionally, four soldiers from the Washington, Oregon, and Utah Army National Guards were awarded the Army Achievement Medal for their help in dislodging the crushed cargo from the bottom of the helicopter.

Col. Scott Meyers, commander of Task Force Ivy Eagle and the senior aviator in Afghanistan at the time of the incident, called for the crew to be “commended for their actions.” Had they not acted “deliberately and calmly,” he said in the release, the incident could have “led to a greater loss of equipment and quite possibly loss of life.”