The brass-balled fella has sniffed out 39 landmines and 28 unexploded munitions, earning him a gold medal. 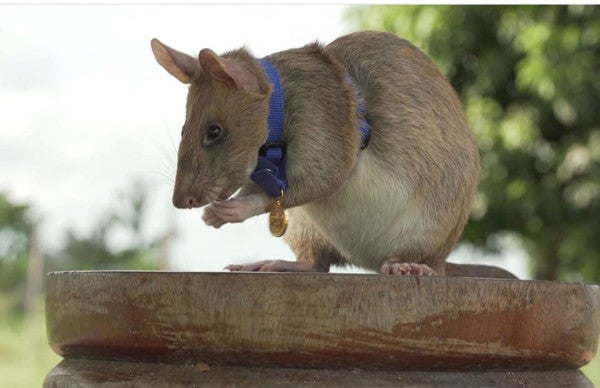 The world feels like a dark place right now, but true heroes make it a little brighter. Enter Magawa, an African giant pouched rat trained to sniff out landmines and unexploded ordnance in Cambodia.

And Magawa is damn good at what he does: over the past four years, the brass-balled little fella has sniffed out 39 landmines and 28 unexploded munitions. His bravery earned him a gold medal from a British veterinary charity on Friday.

“Magawa’s work directly saves and changes the lives of men, women and children who are impacted by these landmines,” wrote Jan McLoughlin, director general of the People’s Dispensary for Sick Animals, in a statement. “Every discovery he makes reduces the risk of injury or death for local people.”

The PDSA Gold Medal is usually awarded to civilian animals for “animal bravery and exceptional devotion to duty,” according to the charity website. In PDSA’s 77-year history, Magawa is the first rat to be recognized with an award. Other species include dogs, horses, pigeons and a cat. But by George has this rat earned it.

Born in Tanzania in November 2014, Magawa was immediately trained in the art of smelling explosives by the Tanzanian charity APOPO. Trainers use a clicker to teach rats how to scratch at the ground above a mine, explained APOPO CEO Christophe Cox.

“During training [the rats] hear a ‘click’ and receive a tasty food reward for finding the correct target scent,” Cox wrote in a statement. “Unlike metal detectors, the rats ignore scrap metal and only sniff out explosives, making them fast and efficient landmine detectors.”

Magawa completed training in 9 months and moved to Siem Reap, Cambodia, in 2016. Since then, he’s cleared the land equivalent of over 26 American football fields, making him the most successful of APOPO’s so-called HeroRats. Magawa’s fast, too — he can search an area the size of a tennis court in 30 minutes, something that could take a human with a metal detector up to four days.

“The PDSA Animal Awards program seeks to raise the status of animals in society and honor the incredible contribution they make to our lives,” wrote McLoughlin. “Magawa’s dedication, skill, and bravery are an extraordinary example of this and deserve the highest possible recognition.”

Still, there’s a long way to go: four to six million landmines were laid in the country between 1975 and 1998, PDSA wrote, with 3 million left unfound. Not only does Cambodia have the highest number of mine amputees per capita in the world (over 40,000 people), but the mines also make fields unsafe to farm on, close roads to trade and cut off communities, APOPO explained.

It’s a good thing Magawa and his fellow HeroRATs are there to help.