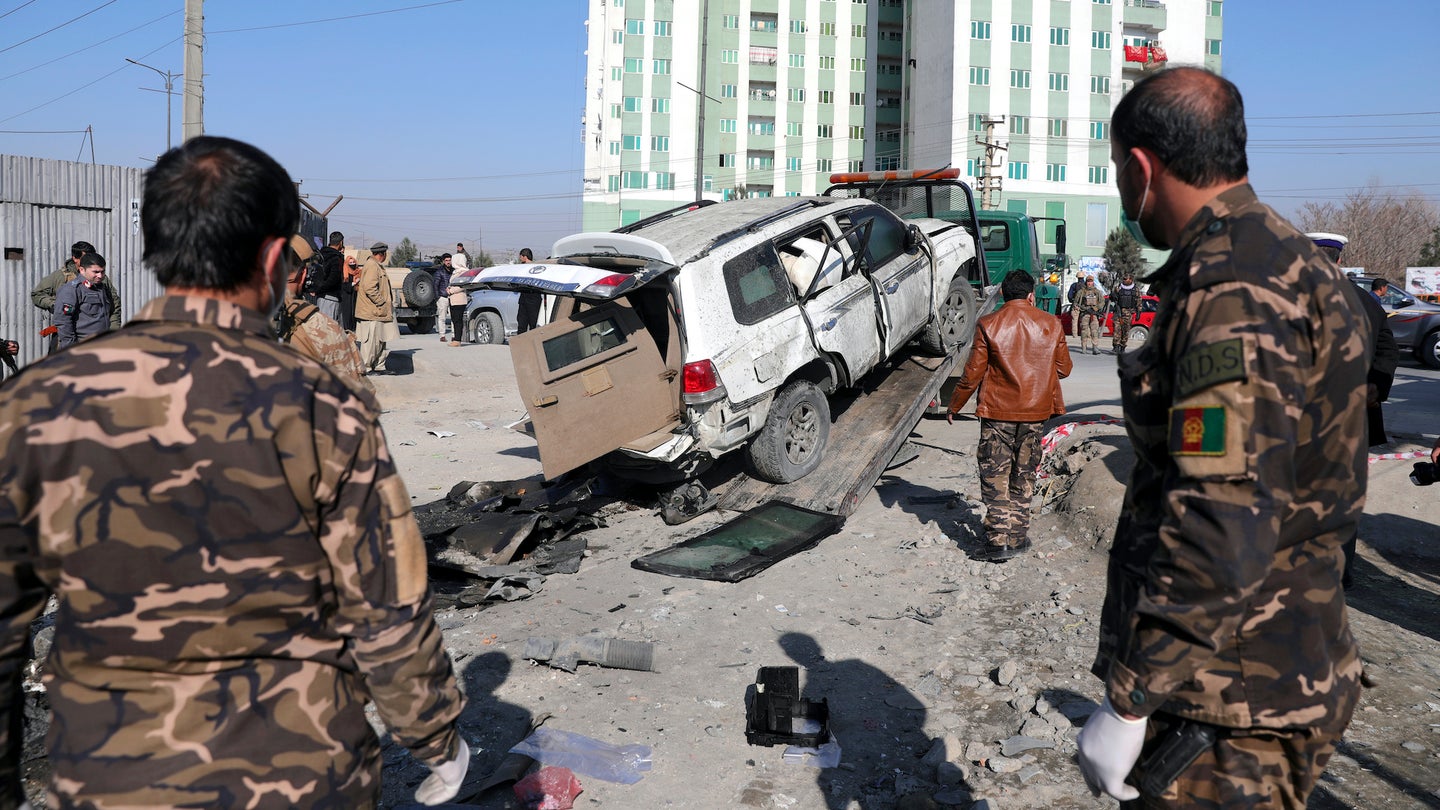 Afghan security personnel inspect the site of a bomb attack in Kabul, Afghanistan, Tuesday, Dec. 15, 2020. A bombing and a shooting attack on Tuesday in the Afghan capital of Kabul killed a few people, including a deputy provincial governor, officials said.(Associated Press/Rahmat Gul).
SHARE

Afghan security forces are reportedly on the lookout for the use of small, magnetic “sticky bombs” that, placed under the vehicles of unsuspecting targets, have accounted for a growing number of fatalities among Afghan officials in recent weeks.

Reuters reports that these improvised explosives have killed at least 10 Afghan government officials and their aides in the last several weeks, according to both unnamed senior Afghan security officials and Western diplomats.

Most recently, security officials claimed that a sticky bomb was responsible for the death of the deputy governor of Afghanistan’s capital of Kabul in an attack on his car on Tuesday.

The use of sticky bombs “is meant to instill fear while avoiding large-scale civilian casualties,” as Reuters reports — and so far, it appears to be working.

“Internal intelligence memos reveal that the Taliban are systematically eliminating mid-career, ambitious government officials and other prominent individuals who are clearly against their hardline stance,” on Western diplomat told Reuters.

Taliban spokesman Zabihullah Mujahid confirmed the use of the explosives in some of the recent attacks on high-level Afghan officials.

“We will continue to target the enemy and continue to eliminate important government figures, but not journalists or social activists,” Mujahid told Reuters, adding that the group is “directly attacking those people who are fighting against us either on the battlefield or those plotting against us from their government offices.”

According to Reuters, magnetic versions of the classic sticky bomb have been prevalent across Afghanistan since the early years of the U.S. invasion of the country to sow fear and terror among both Afghanistan and foreign fighters.

Indeed, the prospect of Taliban fighters easily placing sticky bombs on armored vehicles immobilized by the chaotic traffic patterns of major urban centers has created a climate of uncertainty and unpredictability among Afghan officials, many of whom simply fear getting in their cars to travel to work on a given day, according to The New York Times.

“It’s a great outcome for the Taliban — each one is like a news bomb in the media,” Mohammad Arif Rahmani, a member of the Afghan Parliament’s security committee, told The Times of the magnetic explosives. “These bombs are spreading big fears through society.”

Concerns over the use of magnetic sticky bombs come amid ongoing negotiations over a long-term peace settlement between the United States, the Afghan government, and the Taliban as part of the agreement signed back in February.

While the Taliban has largely refrained from attacking U.S. military forces in the country since the signing of the agreement, the same courtesy clearly hasn’t been extended to Afghan government officials.

Indeed, violent attacks in Afghanistan have surged by 50 percent in recent months, according to a recent report from the Special Inspector General for Afghanistan Reconstruction (SIGAR), a “distressingly high” level of violence as U.S. special envoy to Afghanistan Zalmay Khalilzad put it in October.

“The belief that says violence must escalate to win concessions at the negotiating table is very risky,” Khalilzad said of the Afghan-Taliban negotiations at the time. “Such an approach can undermine the peace process and repeats past miscalculations by Afghan leaders.”

In the meantime, Chairman of the Joint Chiefs of Staff Gen. Mark Milley is currently in Doha, Qatar to meet with Taliban negotiators regarding the level of violence in the country. Let’s hope that trip doesn’t involve any traffic jams, for everyone’s sake.