Leader Of The Afghan Taliban Is Finally Officially Dead

On Wednesday, Afghanistan intelligence officials confirmed that Mullah Mohammad Omar, the leader of the Taliban, has been dead for at... 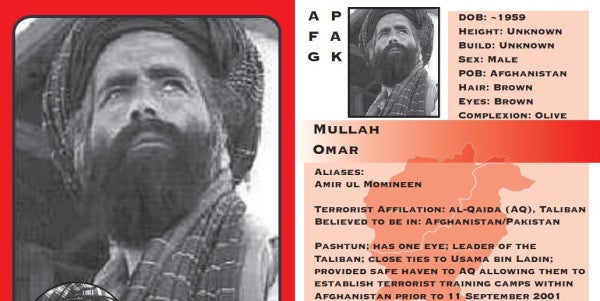 On Wednesday, Afghanistan intelligence officials confirmed that Mullah Mohammad Omar, the leader of the Taliban, has been dead for at least two years. Abdul Hassib Seddiqi, a spokesman for the Afghanistan’s National Directorate of Security, told the Associated Press that Omar died in a hospital in Karachi, Pakistan, in April 2013. Though rumors of Omar’s death, which began circling months ago, have been proven true, the cause of death remains unknown, with Seddiqi saying only that he died under “suspicious” circumstances.

It is also unclear what effect this information will have on peace talks between the Afghan government and the Taliban. Omar has long been a unifying symbol for the militant group, and open acknowledgment of his death could lead to an open fight for power within the group as factions vie for control.

Known to most of the world for making Afghanistan a safe-haven for Osama bin Laden and al Qaeda, Omar was an elusive figure who eschewed public events and lost an eye fighting the Soviet occupation in the 1980s. He is credited with being the ideological leader of the Taliban, who rose to power and took control of Afghanistan in the 1990s, until the group was ousted by coalition forces following the Sept. 11 terrorist attacks.