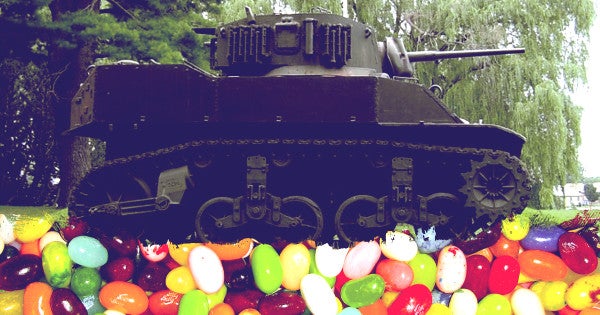 In August 2015, Dwayne Brasher ran over a man named Kevin Wright with a World War II-era M5 tank. Now Wright’s family is seeking justice for what they are calling a wrongful death. The kicker? Dwayne Brasher is married to Jelly Belly jelly bean CEO Lisa Brasher, and the tank belonged to her father — candy mogul Herman Rowland Sr.

The lawsuit was filed May 11 in California Superior Court. It accuses the Jelly Belly family of negligence resulting in wrongful death and goes on to say that the incident orphaned Wright’s two daughters, and stripped his 80-year-old father of a provider.

Rowland collects and restores old military vehicles, which he keeps in his personal showroom in Fairfield, California. It is known as the “Tank Barn.”

Wright was originally hired by the family to help maintain the vehicle collection. At Rowland’s request, he went along for a tank ride with Brasher, who was not trained to operate the M5.

During the ride, Wright was thrown from the tank, and Brasher ran over him.

“Defendants had a duty to train and supervise the persons operating the M5 tank and to lend their World War II vehicles only to individuals with sufficient knowledge to drive them so as to ensure they would be operated safely,” the suit claims.

Brasher and Rowland have yet to respond to press inquiries about the suit.