Students at Johns Hopkins University in Baltimore, Maryland, have developed an adjustable prosthetic foot with female veterans in mind. The... 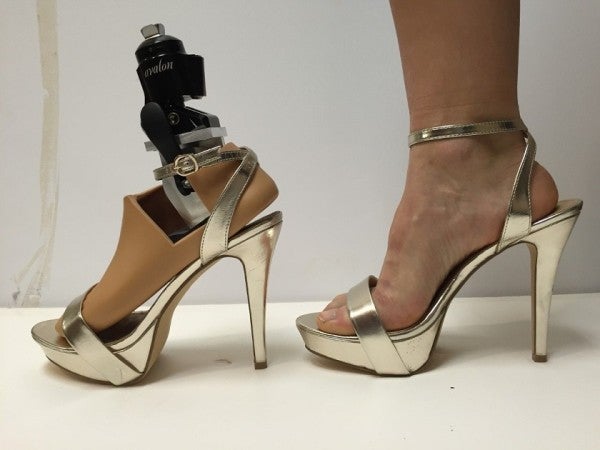 Students at Johns Hopkins University in Baltimore, Maryland, have developed an adjustable prosthetic foot with female veterans in mind. The prosthesis, called Prominence, has an adjustable ankle that allows the user to wear heels up to four inches high.

According to a Johns Hopkins press release while there are numerous options for prosthetic feet on the market, most are designed to fit men’s shoes and none can adjust to a heel more than two inches high.

“High heels have become an integral part of the female lifestyle in modern society, permeating through all aspects of life – professional and social,” wrote the five students who graduated earlier this month from the university’s Whiting School of Engineering in their final project report. “For female veterans of the U.S. armed services with lower limb amputations, that seemingly innocuous, but so pervasive, and decidedly feminine part of their lives is gone.”

The students sought to bring it back. However, creating a prosthetic foot that can work with a four-inch high heel is not an easy task.

Related: This Marine Vet Is The First Recipient Of A Revolutionary Prosthetic Hand »

First they had to design a foot that adjusts to a range of heel heights without a separate tool. It also had to hold the position without slipping, support up to 250 pounds, weigh less than three pounds, and of course, be slender enough to accommodate high heel shoes.

According to Luke Brown, one of the Johns Hopkins students, the human foot “took thousands of years of evolution to get this way, we have one year to match it.”

Over two semesters, the students fielded a number of prototypes: one with a balloon in the heel it give some spring in the step — that didn’t work. Another idea involved a mouse-trap spring, also a no go.

The final design used a mechanism with two interlocking aluminum disks that open and close with an attached lever at the ankle. An off-the-shelf hydraulic unit was used for the ankle to allow for a smooth gait.

Prominence was tested by seven people, including three amputees. While the initial goal was to create a foot that could work with high heels, an adjustable prosthetic means even greater flexibility for amputees once Prominence hits the market.

“I had a good time walking ,” said Alexandra Capellini, a junior at Johns Hopkins University, who lost her right leg to bone cancer as a child. “It felt stable … An adjustable ankle is useful in contexts even beyond high heels. Ballet flats, sneakers, boots, and high heels especially, all vary in height, so an adjustable ankle opens up opportunities to wear a variety of shoes.”