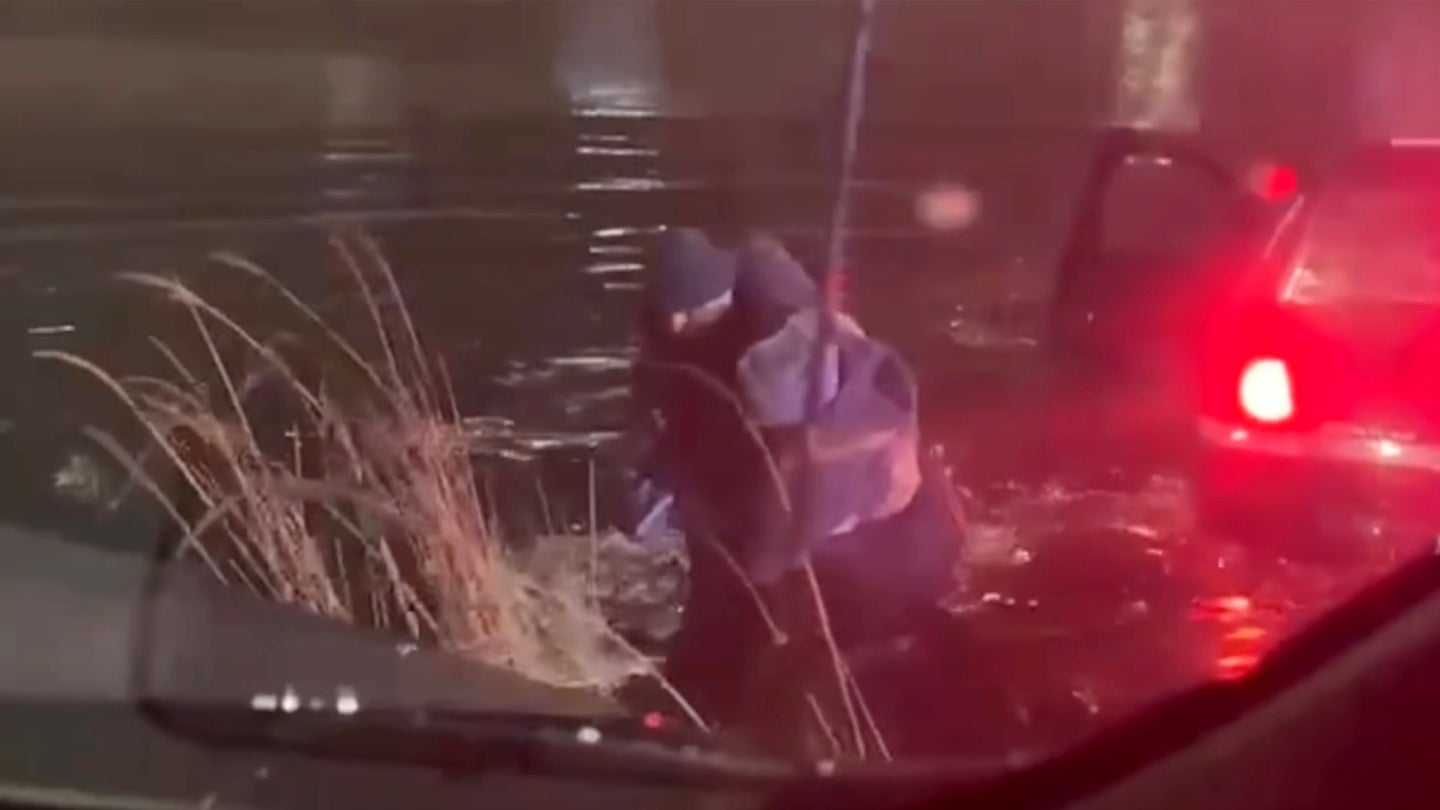 Video captured the moment that Carlos Fernandez sprang into action to help two strangers in need. (Screenshot via Facebook).
SHARE

A Marine veteran waded hip-deep into freezing water to rescue two women whose car had run off the road and into a pond on Jan.16 in Hammond, Indiana.

Carlos Fernandez credited his time in the Marine Corps with allowing him to react so quickly to the emergency.

“I think it was the Marine in me, which just instantly was like, ‘Hey, you always got to do the right thing,” he told WLS-TV, a Chicago television station. “Something that we preach in the Marine Corps is integrity, and integrity is doing the right thing even when nobody is looking.”

Cellphone video of the event shows Fernandez already in the pond as he looks through the driver’s side window and calls out that two people are inside the vehicle.

In the video Fernandez can be seen opening the car door and helping one woman out, saying “You’re OK” as the other woman then begins to climb out the driver’s side door.

The video then shows Hernandez carrying one of the women out of the water. Sirens from emergency vehicles can be heard in the background.

Fernandez enlisted in the Marine Corps in 2015, and he served first as a mortarman and then as a marksmanship coach until he left the Corps as a sergeant in 2019, according to a copy his DD-214, which he provided to Task & Purpose. He deployed to Iraq and Syria with 2nd Battalion, 7th Marines.

He told Task & Purpose that on the night of the incident, he was driving with his girlfriend to get some food when he noted the car in the pond. His initial plan was to use the chain in the back of his truck to pull the vehicle out of the water, but then a man said that two people were entrapped in the car.

“I looked at the car and I thought to myself this car can slip and go under at any point in time,” Fernandez told Task & Purpose. “So, I jumped in the water initially the water felt cold but my concern wasn’t on whether the water was cold my concern was whether the two women were mobile or not.”

When he reached the car, he confirmed that both women were ok and came up with a plan to get them to safety. As soon as he opened the driver’s side door, water began to pour into the vehicle.

“I told the women that they will have to wait and be patient till I the water fills up the car and then I could get them out one by one,” Fernandez said. “I noticed that had what appeared to be walkers in the back so I carried them to the shoreline. One of the women had no shoes on – she lost them in the water – so I gave her my crocs I had.”

The first woman’s foot became stuck in the mud, so Fernandez had to carry her to safety, he told WLS-TV. Ultimately, he made three trips into the cold water to rescue both women before Indiana State police arrived, Fernandez told the television station.

Fernandez wrote a message on his Facebook page on Sunday thanking people who had praised his actions to rescue the two women.

“I have been given a lot in my life by a few caring and loving individuals,” Fernandez wrote. “They taught me to give back to people. God almighty put me in that spot that night for a reason and I am [grateful] that he put me there to be what you guys call a ‘hero.’”

Update: 1/24/2023; This story was updated with comments from Fernandez about rescuing the two women.